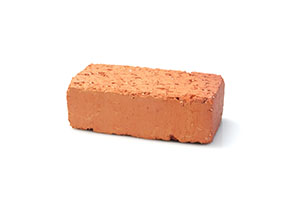 At the very beginning of the Bible, in the eleventh chapter of Genesis, we have this description of the Tower of Babel:

While men were migrating eastward, they discovered a valley in the land of Sennaar and settled there.  They said to one another, “Come, let us make bricks and bake them.”  They used bricks for stone and bitumen for mortar.  They then said, “Let us build ourselves a city and a tower with its top in the heavens; let us make a name for ourselves lest we be scattered all over the earth.”  [Genesis 11:2-4]

Many people, yours truly included, believe that the Tower of Babel is the perfect symbol of secular society.  By “secular society” I mean a world that sets itself up in arrogant opposition to the will of God.

Note that the Tower of Babel was constructed of bricks.  Bricks have four characteristics.  First, they are unnatural and artificial.  You won’t find a brick occurring in nature.  Second, they are identical and uniform.  It’s not easy to distinguish one brick from another.  Third, they are functionally undifferentiated and interchangeable.  A brick can serve equally well anywhere in a wall.  Fourth, they are all but worthless.  So what if you lose a brick.  There are hundreds more just like it.

What could be more unnatural and artificial than a society that rejects God?  In such a state, citizens will be made to conform to uniform standards and will lose their individuality.[1]  Their work will be reduced to interchangeable roles.  And, because they have lost all uniqueness, they will become utterly worthless[2].

Now, listen to what Saint Paul has to say in his Second Letter to the Corinthians:

If then any man is in Christ, he is a new creature:  the former things have passed away; behold, they are made new!  [2 Corinthians 5:17]

In opposition to the Tower of Babel, we have a new creation.  This is how Saint Peter describes this new creation:

Draw near to him [viz. Christ], a living stone, rejected indeed by men but chosen and honored by God.  Be you yourselves as living stones, built thereon into a spiritual house, a holy priesthood, to offer spiritual sacrifices acceptable to God through Jesus Christ.  [1 Peter 2:4-5]

There you have it.  Bravely standing against secular society, the Tower of Babel, built of bricks, we have a new creation, the Church, a temple built of living stones.

Living stones have four characteristics.  First, living stones are not just natural, but supernatural.  Second, they are utterly unique.  No two are exactly alike.  Third, they are irreplaceable.  A stone that occupies a particular place in a wall can fit nowhere else.  Fourth, they are extremely precious.

What could be more supernatural than a society in which Christ dwells?  In the eyes of Jesus, every human being is utterly unique and unrepeatable.  What two human beings are exactly alike?  In the Church, every person is irreplaceable, because each one of us has a mission no one else can fulfill.  Finally, in the heart of Christ, every human being is precious, because every one of us is made in the image and likeness of God.  Each one of us, therefore, has infinite value.

The question is this:  Which would I rather be—a brick in secular society or a living stone in the temple of the Church?  In the former edifice, we lose our identity.  In the latter, we become who we are meant to be.  C.S. Lewis puts it this way.  In his book The Screwtape Letters, he writes of God’s plan for His human creatures:

[He] sets an absurd value on the distinctness of every one of them.  When He talks of their losing their selves, He means only abandoning the clamour of self-will; once they have done that, He really gives them back all their personality, and boasts…that when they are wholly His they will be more themselves than ever.  [Letter XIII]

[1] I cannot help but think of the evil city on the planet Camazotz, described in Madeleine L’Engle’s young adult classic A Wrinkle in Time.  Here even children are required to bounce their balls simultaneously in precise rhythm.

[2] Recall the futuristic society depicted by Lois Lowry in her book The Giver.  This brave new world at first appears to be quite utopian, but we soon learn that euthanasia and infanticide are essential features of a colorless world.