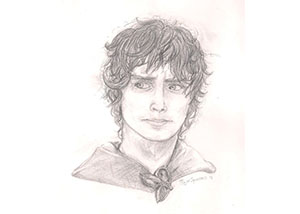 A Homily for the Fifth Sunday in Ordinary Time – Year C

These, of course, are the opening lines of the classic Lord of the Rings trilogy by J.R.R. Tolkien.  (Tolkien himself later admitted that he composed this poem while in the bathtub!)  As many of you know from having read the books and having seen the movies, the Lord of the Rings relates the adventures of a Halfling, or hobbit, named Frodo Baggins.  Frodo must destroy the one evil Ring of Power, a ring whose very existence threatens to cast all of Middle-Earth into darkness.

When Frodo first realizes that he is the one called to undertake the dangerous mission to carry the ring of doom to its destruction, he naturally feels unworthy and incapable.  He says, “I Frodo, son of Drogo, will take the ring, but I do not know the way.”  Our protagonist is nonetheless given three boons to fortify him.  His first gift consists of no less than eight companions to accompany him on his mission, the most loyal of whom is the stout-hearted hobbit Samwise Gamgee.  Later, Lady Galadriel, Queen of the elves of Lothlórien, bestows two other gifts.  She supplies Frodo with elven bread to nourish him on his journey.  She also entrusts to him a small phial of light from Eärendil’s star.  “May it be a light to you in dark places,” says the Queen, “when all other lights go out.”

Take note.  Only after Frodo Baggins has been chosen for the impending struggle with the forces of darkness is he given the means whereby to bear up under trial and prove victorious.  In other words, Frodo is not chosen for the mission because he has “the right stuff.”  He is given exactly what he needs to come out on top precisely because he has been chosen.  He is not called because he is qualified.  On the contrary, he is qualified once he has been called.

We see the same theme played out in all three of our readings today.  In the Old Testament, Isaiah has a vision of angels before the glory of God.  He naturally feels unworthy.  He protests, “Woe is me, I am doomed!  For I am a man of unclean lips, living among a people of unclean lips; yet my eyes have seen the King, the LORD of hosts!”[1]  Isaiah relates what happens next:

Then one of the seraphim flew to me, holding an ember that he had taken with tongs from the altar.  He touched my mouth with it, and said, “See, now that this has touched your lips, your wickedness is removed, your sin purged.”[2]

The prophet elect is made fit for his mission.  God does not call Isaiah because the latter is qualified.  Isaiah is qualified once he has been called.

What about our second reading from the First Letter of Saint Paul to the Corinthians?  Here the Apostle describes his own sense of unworthiness.  He says, “Last of all, as to one born abnormally, he [i.e. Christ] appeared to me.  For I am the least of the apostles, not fit to be called an apostle, because I persecuted the church of God.”[3]  Saint Paul, however, knows that he has been granted all that he needs to accomplish his God-given mission.  He asserts:

But by the grace of God I am what I am, and his grace to me has not been ineffective.[4]

In today’s Gospel, Saint Peter encounters Jesus and pleads, “Depart from me, Lord, for I am a sinful man.”[5]  The future pope knows himself to be unworthy.  He is not whining or whimpering.  He is merely stating a fact.  Despite this, Jesus assures him:

Do not be afraid; from now on you will be catching men.[6]

What about me?  First, do I, like Frodo Baggins, the prophet Isaiah, Saint Peter, and Saint Paul, live with the conviction that I have a special mission to fulfill?  John Cardinal Newman, the famous convert to Catholicism from the Church of England, once wrote:

God has created me to do Him some definite service.

He has committed some work to me

which He has not committed to another.

I have my mission.

I may never know it in this life,

but I shall be told it in the next.

God has not created me for naught.[7]

Does Newman’s conviction resonate in my heart?

Second, do I have a healthy sense of my own unworthiness?  Do I take to heart the recommendation of the seventeenth-century Bishop of Geneva, Saint Francis de Sales, and ponder the fact that the universe ran perfectly well for eons before I ever was created?[8]  Have I come to realize that people who think themselves the next best thing to sliced bread usually end up as toast?  In short, am I humble in the recognition that I am not God?

Third, do I readily accept the gifts that will qualify me for my life’s mission?  Have I, like Frodo Baggins, come to recognize the value of genuine friendships?  Here is another insight from Saint Francis de Sales:

There are some who will tell you that you should avoid all special affection or friendship as likely to engross the heart, distract the mind, excite jealousy, and whatnot, but they are confusing things.  They have read in the works of saintly and devout writers that individual friendships and special intimacies are a great hindrance in the religious life, and therefore they suppose it to be the same with all the world, which is not at all the case.  Whereas in a well-regulated community everyone’s aim is true devotion, there is no need for individual intercourse which might exceed due limits.  In the world, those who aim at a devout life require to be united one with another by a holy friendship, which excites, stimulates, and encourages them in well-doing.  Just as men traversing a plain have no need to hold one another up, as they have who are amid slippery mountain paths, so religious do not need the stay of individual friendships, but those who are living in the world require such for strength and comfort amid the difficulties which beset them.  In the world, all have not one aim, one mind, and therefore we must take to us congenial friends….  What need to affirm so unquestionable a fact?  Saint Jerome, Saint Augustine, Saint Gregory, Saint Bernard, and all the most notable servants of God have had special friendships which in nowise hindered their perfection.[9]

“Faithful friends,” says Sacred Scripture, “are a sturdy shelter; whoever finds one finds a treasure.”[10]  Am I confident that, just as Frodo Baggins was given his companions in order to bring about the destruction of the Ring of Power, just as Jesus Christ was given His Apostles in order to preach the Kingdom of God, just as Saint Paul was given Saint Mark and Saint Timothy in order to spread the Gospel, so God Almighty will give me the friends I need in order to accomplish my life’s work?  Am I discerning in my choice of friends?  Do my friends and I help one another in our mission to serve God and neighbor?

Frodo Baggins was nourished on elven bread.  Do I allow myself to be nourished regularly by worthy reception of Holy Communion, food for my journey?  Frodo was guided through darkness by the light of Eärendil’s star.  Do I look for guidance from Mary, Star of the Sea?  Do I pray often and devoutly the holy Rosary, a light in darkness and a weapon against evil?  In his famous prophetic dream, Saint John Bosco (d. 1888) saw that the Ship of the Church would sail safely through the strife of battle so long as she kept her bow pointed between the two great pillars of the Eucharist and the Blessed Virgin Mary.[11]  Am I convinced that I will accomplish my mission in life only insofar as my faith is both Eucharistic and Marian?

To sum up, each of us has a God-given mission in life, whether we know it or not.  Although naturally unworthy and unfit for this mission, it is not a mission impossible.  Jesus will give us precisely what we need to accomplish it.  Our Lord does not call the qualified, but, by giving us faith-filled friends, His Flesh as food, and His Mother as light, He qualifies the called.

[8] Introduction to the Devout Life, Part I, Chapter 9.