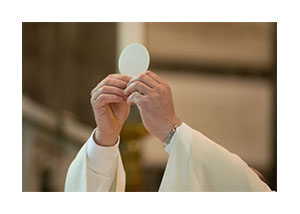 The Jews quarreled among themselves, saying, “How can this man give us his flesh to eat?”  Jesus said to them, “Amen, amen, I say to you, unless you eat the flesh of the Son of Man and drink his blood, you do not have life within you.  Whoever eats my flesh and drinks my blood has eternal life, and I will raise him on the last day.  For my flesh is true food, and my blood is true drink.  Whoever eats my flesh and drinks my blood remains in me and I in him.”

Non-Catholics find the doctrine of transubstantiation hard to swallow (pun intended) precisely because it would appear that the Catholic Church is condoning a kind of cannibalism!  After all, if we Catholics really do consume the Flesh and Blood of Jesus, are we not guilty of the very worst sort of cannibalism?  Here I would like to make four points.

Point #1:  The accusation that Christians engage in cannibalism is nothing new.  Way back in the second century, a fellow by the name of Athenagoras—an apologist, in other words, a defender of the Christian Faith—wrote a treatise entitled Plea for the Christians.  In Chapter 3, he specifically mentions the fact that the ancient Romans were charging the Christians of his day with conducting “Thyestean feasts.”[1]  For those of you who are up on your Greek mythology, you’ll know that poor Thyestes was a guy who was tricked into eating his own children.  Homer says that they were cooked up “in a concealing dish.”  So Athenagoras is specifically telling us that the Ancient Romans accused the early Christians of cannibalistic banquets.  I repeat: the charge of cannibalism leveled at Christians who consume the Eucharist is nothing new.  Nihil sub sole novum est.  Nothing is new under the sun.[2]

Point #2:  In Chapter 35 of his Plea for the Christians, Athenagoras refutes the Romans’ charge of cannibalism.  He simply observes: “…you cannot eat human flesh unless you have killed someone.”  He then goes on to discuss how Christians abhor all forms of murder, including, incidentally, gladiatorial contests and abortions.[3]  (Yes, unfortunately, there were abortions back in the ancient world.  Nihil sub sole novum est.)  But note.  In defending the Church, nowhere does Athenagoras even begin to soften the literalness of Jesus’ words regarding the Eucharist.  Nowhere does he deny the fact that Christians really do partake of the Flesh and Blood of Jesus.  He could have easily refuted the charge of cannibalism simply by asserting that the Eucharist is a symbol, that Holy Communion is really bread called by another name.  But no!  Athenagoras is obviously a believer.  He doesn’t dismiss the accusation of cannibalism by taking the easy way out in saying that the Eucharist is just symbolic.

Point #3:  Athenagoras’ Plea is an eloquent testimony to the willingness of the ancient Church to adhere to Gospel truth, despite the misunderstandings and reproaches of a nonbelieving world.  The early Christians stuck to their guns despite the fact that the world misunderstood and reviled them.  We Catholics today must possess this same willingness.  If the charge of cannibalism was hurled at the first Christians simply because they staunchly affirmed the Real Presence of Jesus in the Eucharist, then I will not blush with shame if the same or similar accusations are thrown at me.  Call me a cannibal, if you like.  Call me a bigot.  Call me antediluvian.  But I believe the Eucharist is indeed the Flesh and Blood of Jesus.  I believe what the Church teaches.  I believe in the Gospel, despite the slanders of the world.

Point #4:  Partaking of the Eucharist is nothing at all like cannibalism.  Father Leslie Rumble and Father Charles Mortimer Carty explain:  “Christ is not present in the Eucharist under a form in which cannibalism could be possible.  His body is really and substantially present, but not in a natural way.  It is an entirely supernatural [i.e. sacramental] mode of presence which…at least excludes all notion of cannibalism.  ….though Christ is really received in the Blessed Sacrament, it involves no cannibalistic devouring of human flesh…”[4]

Scott Hahn, a Catholic lay evangelist who was once a Presbyterian minister, goes right to the point.  “The early Church” he says, “was accused of cannibalism….  It’s not cannibalism.  He’s not dead.  He’s alive in glory with power for us…”[5]  Well said!  In order to practice cannibalism, the cannibal must kill his victim, and then the cannibal’s body converts the dead flesh into his own living flesh.  That’s not what happens when we consume the Eucharist.  When we receive Holy Communion, Christ remains alive.  We don’t change Him into us.  On the contrary, He transforms us into likenesses of Himself.  We become like Him whom we consume, and in so doing, we become the selves God intended us to be.

To sum up:  First, the accusation of cannibalism with regard to the Eucharist is nothing new.  It goes all the way back to the very first days of Christianity.  Second, in defending themselves against the charge of cannibalism, the early Christians never took the easy way out by denying that Jesus is truly present in the Eucharist.  Third, the Early Church was willing to adhere to Gospel truth, despite the misunderstanding and reproaches of the world.  Fourth, partaking of Holy Communion is not cannibalism.  Rather than consuming dead flesh and transforming it into ourselves, we take into ourselves the living Christ, who transforms us into Himself, and thus we become the selves we were meant to be.  Receiving the Eucharist is nothing like cannibalism.  It’s a much more dangerous undertaking.  It’s our invitation to Jesus to transform us.  In the words of Father William Seifert (pastor of Saint Stephen of Hungary Church here in Allentown), “If Jesus is willing to turn cheap bread and wine into His Body and Blood, what will He not do for our hearts?”

“Blessed are those called to the supper of the Lamb.”[6]

[5] From a recorded lecture entitled The Fourth Cup.