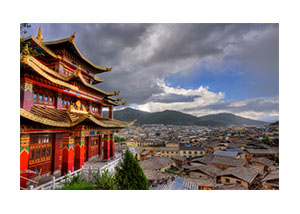 Amen, I say to you, unless you turn and become like children, you will not enter the kingdom of heaven.

In the summer of 1968, Dad took Mom and us six kids on a three-week visit to Japan, his ancestral homeland.  Our family toured as many Shinto and Buddhist temples as the average American abroad in Europe tours Gothic cathedrals.  After a while, all those shrines and holy places seemed to melt into a mental blur.  There is, however, a single detail, that I do remember with particular clarity.

In one of the temples, our priest guide showed us a large column, about ten feet in diameter, extending from floor to ceiling.  At the base of this impressive structure was a tiny closed, wooden door, only about a foot high.  We were told, “Whoever can fit through this little door will go straight to heaven.”

I watched as a toddler of about three vainly attempted to gain access to heaven.  It frustrated me that the temple authorities were making an impossible task a prerequisite to salvation.  To my sophisticated, literal, know-it-all, eleven-year-old mind, this seemed nothing less than cruel.  I also found myself thinking, What a stupid thing to tell people!  Who would be so gullible as to believe such pious nonsense?

Many decades later, I find that I am more and more self-critical of my youthful opinions.  Maybe, just maybe, the Japanese were on to something.  Maybe they were trying to convey the same kind of message that Jesus did when He declared that the Kingdom of Heaven is for the childlike.  Maybe heaven is for those who preserve a sense of childlike wonder.  Maybe it is no place for even sophisticated, literal, know-it-all eleven-year-olds.

Now this is just pure fantasy on my part, but I sometimes imagine that, in the Particular Judgment immediately after death, Jesus will ask everyone who lived long on the earth to become once again as we were when we were only five years old—when we were both cute and innocent.  All those who readily agree to become children–who let go of their big fat egos, who relinquish their academic degrees, social status, and honorary titles—all these will eventually be granted entrance into heaven.  But those who refuse to (literally) “be -little” themselves—those who take themselves far too seriously, those whose grip on their egos is so strong that they can never say, “I’m sorry”—these will have nowhere to go but hell.  As I said, this is only my own fantasizing, but it sheds a whole new light on our Lord’s warning that, unless we become childlike, we will not enter the Kingdom.  What I’m saying here is not doctrine.  It’s just something to ponder.

And yet, when I see so many families (including my own) having to deal with loved ones suffering from Alzheimer’s disease or dementia, I am tempted to think there is something to my theological speculations.  Perhaps, for many people, dementia and Alzheimer’s disease constitute the little, hard-to-enter door at the base of the column, a door they would otherwise find too difficult to pass through.