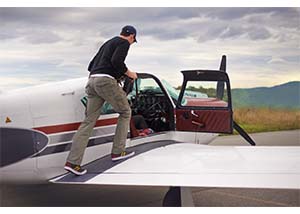 When I was still teaching at Bethlehem Catholic High School, Danny D’Ambrosio, a former student who was working his way toward becoming an airline pilot and who needed to log in some flight time, asked me if I wanted to fly to Harrisburg with him.  I consulted my grade books and discovered that the fellow had been a somewhat decent student and that I had not given him an unusual amount of demerits.  The kid had no vendetta to settle, so I took him up on his offer.

On the appointed day, we went to Queen City Airport in Allentown.  Danny carefully filled out and filed a flight plan.  We waited for some time, but once given the okay, he was assigned a single-prop Cessna.  I climbed aboard, and Danny handed me a set of headphones so that I could listen in on all the communications between him and the flight tower.  Meanwhile, the young pilot went through what seemed to me a very extensive and tedious systems check, lasting some twenty minutes.  Once that was completed, Danny got into the cockpit, started the engine, and patiently waited to be assigned a runway.   We taxied into position and had to wait again for the go-ahead for takeoff.

At last we were airborne.  It wasn’t long, however, before I heard the air traffic controller give Danny this message:  “You are about to leave Allentown air space.  Please change your frequency to such-and-such and check in with Reading flight control…”  We flew for a few minutes and Danny, aware of some approaching cloud cover, asked the Reading flight tower for permission to use visual flight rules and fly under the clouds.  “Negative—there is too much traffic!” came the answer.  “You are to assume heading xyz and fly over the clouds.”  We proceeded without incident, Danny all the while checking his instruments to make sure that he was flying exactly according to the flight tower’s specifications.  Once again the static in my headphones crackled into life:  “You are about to leave Reading air space.  Please change your frequency to so-and-so and check in with Harrisburg flight control.”  Before long, it was the tower in Harrisburg that was dictating Danny’s flight path.  Following the controller’s instructions and with permission to land, Danny brought the aircraft safely back down onto terra firma.

Soon it was time to repeat the whole process again for the journey back to Allentown—the filing of a flight plan, the airport’s permission to proceed, the extensive aircraft systems check, the assigning of a runway, the permission to take off, and the precise instructions from the three flight towers.  As I was sitting next to my former student, the thought occurred to me:  Hey, for crying out loud, this kid is nothing but a flying robot.  He can’t even breathe on his own.  He’s got to follow other people’s instructions.  He’s got to ask for permission for everything he does, and he can’t make any independent decisions without getting an okay from someone else.  Who in his right mind would want to be a pilot?  How fun could that actually be?  And then Danny D’Ambrosio uttered a statement that almost made my eye fall out—not my prosthetic eye but my good eye!  “Father Ezaki,” he said, “I love to fly.  When I’m up here in the clouds with the earth far below me, I feel so free!”  Free?  I thought to myself.  It’s sounds as if the kid’s in a vice grip of obedience.  How can he be free?

Our First Reading and our Gospel today are about obedience to law.  Sirach tells us, “If you choose you can keep the commandments, they will save you.”[1]  In our Gospel we learn that Jesus has not come to abolish the Law but to fulfill it.  Moreover, the obedience that He requires far exceeds the statutes set down by Moses.  We are to avoid not only murder but anger, not only adultery but lust, not only arbitrary divorce but divorce altogether, not only false oaths but swearing in general.  If we bristle under all of these laws and commandments, maybe it’s because we’ve forgotten the secret Danny D’Ambrosio knew instinctively in his heart:  Obedience to just law means freedom rather than restraint.  I repeat.  Obedience means freedom.  That flies in the face of so much of what we take for granted in today’s society.  Here, however, is what Frank J. Sheed writes in his wonderful book, Theology for Beginners:

That there are laws in the universe, no one doubts: the law of gravity is one obvious example: the laws of dietetics are another.  By learning these laws and living according to them we gain freedom.  Pause upon this, if the thought is new to you.  Freedom is always bound up with obedience to the law of God; there is no such thing for man as freedom from these laws, there is only freedom within them.  Each new law learned by us increases our freedom.  We learn the laws of gravity, air currents, movement of bodies: and at last we can fly in the upper air.  We learn what elements are necessary in our diet, and certain diseases vanish.

By learning God’s laws—physical and moral– and by living according to them, we increase our freedom.

So consider our Gospel.  If I refrain from committing murder, I’ll stay out of prison.  If I can learn to control my anger, I will enjoy the freedom that comes from healthy relationships and a healthy body.  If I refrain from committing adultery, I’ll be free to look those I love straight in the eye and free from the burden of having to make up lies to cover up my tracks.  If I avoid situations that enflame my lustful desires, I’ll be free to make decisions with a clear head and with cool reason.  If I am married and avoid divorce, I’ll have the freedom of seeing my children regularly.  If I stand by my word and refrain from taking elaborate oaths, I will enjoy the freedom that comes when people trust me.

In short, freedom does not mean doing whatever I want outside the law.  It means willingly obeying God within the law.  I need to embrace again the lesson I once learned from Danny D’Ambrosio:  True freedom comes from obedience.