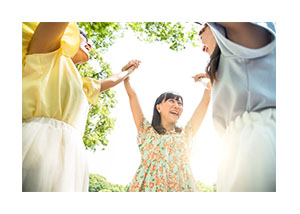 So should it be with you. When you have done all you have been commanded, say, ‘We are unprofitable servants; we have done what we were obliged to do.’”

It was August of 1969.  There she stood on our front doorstep, a wide-eyed, impossibly thin teenager, speaking broken English in a voice little more than a whisper.  Our family had readily volunteered to take in a Japanese girl who would be attending her junior year as an exchange student at Allentown Central Catholic High School.  Yes, Akiko came to us from Japan, but she did so by way of Wisconsin.  There she had stayed with a family that, unfortunately, put her to work as a Japanese housemaid.  In addition to doing all sorts of menial chores, Akiko had been required to don a Japanese kimono, sing, and otherwise entertain the Wisconsin family and their guests whenever company came to call.  This servile existence was not what she had bargained for.  Needless to say, her parents back in the Land of the Rising Sun were not at all pleased.  Thus it was that Akiko came to us in Allentown, Pennsylvania.

My three older sisters quickly made Akiko one of their own, and before long, this once-shy adolescent became like my parents’ seventh child.  In other words, Akiko was part of the family.  Yes, she still did chores, but she did no more than was her fair share, and she did them alongside my sisters.

Soon Akiko was forever chattering and always laughing.  All of us loved her, and we watched her fill out, literally fill out.  She developed an insatiable sweet tooth, and despite drinking countless glasses of saccharin-laced iced tea, she put on about twenty pounds.  By the time she left us with a whole suitcase full of Duncan Hines cake mixes, we really hated to see her go.  Akiko later wrote to us that, at the airport in Japan, her parents hardly recognized her.  She had gained so much weight and she was so fluent in English, that she was at first unable to speak any words of her native tongue.

None of us were surprised and all of us were delighted when, the following year, we received a post card in early spring.  “Vacation will soon be here,” Akiko wrote from Japan.  “Time to visit America!”

In our Gospel today, Jesus calls His followers “unprofitable servants.”  For years, I thought of these words as stinging and insulting.  Aren’t we worth anything to Our Lord?  I almost got the impression that He would rather not have us around.  It’s like one of those Rodney Dangerfield jokes: “My pop wanted me to follow in my uncle’s footsteps.  He died in quicksand.”

But then it hit me.  Maybe Jesus is telling us that He doesn’t want servants who work for pay, that He’d rather have brothers and sisters than slaves.  Akiko learned that it was much more fun to be part of an American family than to be a Japanese housemaid.  To be sure, membership in a family does not exempt one from obeying rules any more than it did Akiko from obeying the Ezaki house rules.  Yet it confers on us a dignity and acceptance that are bestowed rather than earned.  That, I think, is what Jesus wants for us.  He does not want servants who work for pay but brothers and sisters who strive to do what’s best for the family.  Belonging to a family, as Akiko discovered, can require just as much work as being a servant, but in a family, many hands, love, and laughter make the work lighter.

So the next time you and I are tempted to regard ourselves as God’s darling servants who are earning a special place for ourselves in heaven, let’s recall the story of Akiko, bearing in mind that Jesus really wants brothers and sisters instead of servants.  Isn’t that, after all, what you and I would rather be?