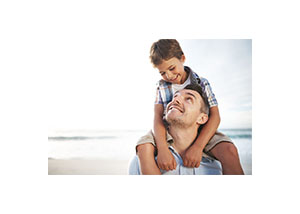 In the second chapter of Saint Luke’s Gospel, Mary and Joseph discover the missing twelve-year-old Jesus in the Temple, and Mary says: “Son, why have you done this to us? Your father and I have been looking for you with great anxiety.”[1]  Our Lady is actually calling Saint Joseph Jesus’ father.  What gives?  In the account of the Annunciation, we’re specifically told that Jesus has been conceived by the power of the Holy Spirit.[2]  But here in the story of the finding of Jesus, Mary is referring to Joseph as Jesus’ Father.  Is the sinless Virgin telling a lie?  How can Saint Joseph be called the father of Jesus?

…Joseph’s marriage to Mary is the juridical basis of his fatherhood.  It was to assure fatherly protection for Jesus that God chose Joseph to be Mary’s spouse.  It follows that Joseph’s fatherhood…  comes to pass through marriage to Mary, that is, through the family….  Scripture recognizes that Jesus is not born of Joseph’s seed…  Nonetheless, he [i.e. Saint Joseph] is not deprived of his fatherly authority from the moment that he is told to name the child….  The Son of Mary is also Joseph’s Son by virtue of the marriage bond that unites them.[3]

Hmm…  It would seem that genuine fatherhood is more than a matter of mere biology.  Rather, it springs from the marriage covenant itself.  Thus Saint Augustine says of Mary and Joseph:

By reason of their faithful marriage both of them deserve to be called Christ’s parents, not only his mother, but also his father, who was a parent in the same way that he was the mother’s spouse: in mind, not in the flesh.[4]

Okay, if Saint Joseph can rightly be called Jesus’ father, this raises another question:  Why would God the Father deem it necessary to give Jesus an earthly father?  I think the divine purpose was to show us that fatherhood is not a luxury but a necessity.  Then what role ought a father to fulfill?

As someone who taught high school for twenty-four years, I would encounter many a boy who, while treating his male teachers with respect, would treat his female teachers with contempt.  I can honestly say that in no less than ninety percent of these cases, the boy’s father was either absent or unavailable.  It would seem that one task of a father is to teach his sons how to treat their mother and, by extension, all women with respect.  When, for example, a boy mouths off to his mother, it’s the father’s role to say: “Son, that’s not only your mother you’re talking to; that’s my wife.  So knock it off!”  A good father teaches his sons to uphold the dignity of women, and, in so doing, he teaches his daughters that no man has a right to abuse them.  You’ve heard it said that the best gift a father can give his children is to love their mother.  I fully agree.  Fathers who love their wives teach their sons to treat women with respect, and they teach their daughters to insist that men treat them with respect.

As an added bonus, fathers apparently play a key role in the faith formation of their children.  Studies indicate that the number one factor determining whether children grow up to practice the faith in which they were raised is whether their father practiced it.[5]  That’s why it is vital for a father to make it a habit to pray and go to church with his family.  This is all the more true if the father is basically a good man.  If a father happens to be a rotten man who doesn’t go to church, his wife could say to the kids: “Hey, go to church, or you’ll end up being like your no-good father.”  But if a father is basically a good man who fails to attend Mass, he sends his children a subtle and probably unintended message that God and obedience to His commandments are unimportant.  A mother, I think, plays an important part in passing on the content of the faith.  But it’s the father’s witness that validates the faith.

Now it goes without saying that many children, through no fault of their own, grow up without fathers.  There are countless heroic mothers who have bent over backwards to raise successfully their fatherless children.  But I argue that this in no way diminishes the importance of fatherhood.  By way of analogy, many blind people have learned to lead happy and productive lives, but this in no way lessens the importance of eyesight.  A well-adjusted blind person is well adjusted precisely because he or she has learned to compensate for a deficit.  Likewise, a well-adjusted adult who has grown up without a good father is also compensating for a real deficit.  A good father is worth his weight in gold, and no amount of fatherless nurturing, however excellent, can fully compensate for his absence.

Again, a good father teaches his son to treat women with respect; he teaches his daughter to expect respect; and he instills in all his children the value of faith.

Modern society tells us that words like “mother” and “father” are meaningless, that parental roles are interchangeable, that, in the long run, even gender itself is meaningless.  These, my friends, are the real lies.  But when Our Lady refers to Saint Joseph as the father of Jesus, she is speaking Gospel truth.

[5] Note this quotation from Eric Sammons’ article, “No Church for Young Men,” in Crisis Magazine, 9 January 2020: “A 2000 report in Population Studies magazine concluded that it is the religious practice of the father of the family that, above all, determines the future attendance and/or absence from church of the children.  More specifically, it states: ‘In short, if a father does not go to church, no matter how faithful his wife’s devotions, only one child in fifty will become a regular worshipper.  If a father does go regularly, regardless of the practice of the mother, between two thirds and three quarters of their children become churchgoers, regular and irregular.’  Only two percent of kids whose fathers don’t practice the faith will end up practicing that faith.  It’s clear, then, that fathers more than anyone impact their children’s future religious practice, and if parishes want children to retain their faith in adulthood, which is the purpose of youth ministry, they should focus, not on the children but on the fathers.”