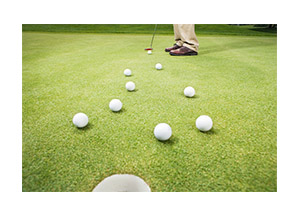 Teach us to number our days aright, that we may gain wisdom of heart.

I go to prepare a place for you.

Whenever I discover that one of my students plays golf, I tell him or her all about Harvey Penick’s Little Red Book: Lessons and Teachings from a Lifetime in Golf.  This classic volume by one of our nation’s finest professional golf instructors includes many tips on how to lower one’s golf score, but its pages contain much wisdom concerning character, honesty, and even spirituality.  Here is one of my favorite Penick gems:

“Golf should be learned starting at the cup and progressing back toward the tee.  I’m talking about with children, but the same thing applies to adult beginners.  But adults think, That’s too simple.  An adult beginner, especially a man, thinks he’s not getting his money’s worth if you ask him to spend an hour sinking short putts.  He wants to pull out his driver and smack it—which is the very last thing he’ll learn if he comes to me.  If a beginner tries to learn the game at the tee and move on to the green, postponing the short game until last, this is one beginner who will be lucky to ever beat anybody.”

Harvey Penick further claims that any golfer can achieve a five-point reduction in score if, for the next two weeks, he or she spends ninety percent of practice time focusing on short putts and only ten percent teeing off on the driving range.

Can Mr. Penick’s advice about golf be translated into spiritual wisdom?  I believe so.  Just as a golfer can become proficient by spending more time practicing on the green rather than on the driving range, so we too can make progress in the spiritual life by spending more time contemplating (1) the brevity of earthly existence and (2) the supreme priority of getting to heaven.

Life here on earth is short.  Yet we tend to be like golfers who spend too much time practicing on the driving range, telling themselves that the green is a long way off and that they have plenty of time to make improvements in their game.  How often do we tell ourselves that death is a long way off and that we have lots of time to get right with God?  How often do we place the thought of the Four Last Things (death, judgment, heaven, and hell) on the back burner?  By keeping our mortality always before our eyes, it is as though we are practicing golf around the cup rather than at the tee, as though we are practicing our short game.

According to the old Baltimore Catechism, God made us “to know Him, to love Him, and to serve Him in this world, and to be happy with Him forever in the next.”  In other words, heaven is our supreme priority.  We need to get our priorities in order.  Putts around the cup tend to be more important in a golf game than long drives from the tee.  Yet, as Mr. Penick reminds us, golfers are often unwilling to practice their short game.  Are we willing to get our priorities straight?  Does God come first in our lives?  Does Jesus occupy the central place in our souls?

Harvey Penick also insists that golf is a game of honor and that the golfer competes, not so much with others, as with himself or herself.  Here again the applications to Christian spirituality are manifold.  These, however, I leave to adepts who, unlike yours truly, actually play the game of golf!