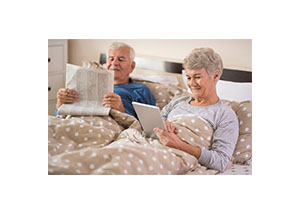 And people brought to him [i.e. Jesus] a deaf man who had a speech impediment and begged him to lay his hand on him.  He took him off by himself away from the crowd.  He put his finger into the man’s ears and, spitting, touched his tongue; then he looked up to heaven and groaned, and said to him, “Ephphatha!”—that is, “Be opened!”—And immediately the man’s ears were opened, his speech impediment was removed, and he spoke plainly.

What most amazes me about my parents was their ability, apparently acquired through many years of marriage, to communicate with one another without speaking a single word.  They could sit together in a room for hours in all but unbroken silence, Mom sewing a quilt, Dad reading a newspaper, and they were perfectly content simply to be in one another’s presence.  Sometimes my mother would break the silence by telling my father what was on her mind, and Dad would respond: “Isn’t that funny?  I was thinking exactly the same thing.”  Sometimes Dad would be the one to begin a sentence, and Mom would finish it for him.  It was obvious that my parents did not need words in order to share one another’s thoughts.

This is not an uncommon experience for couples who have been married a long time, and, in my opinion, it’s the epitome of marital happiness.  Mary Ann Shaffer, author of The Guernsey Literary and Potato Peel Pie Society, writes: “I don’t want to be married just to be married.  I can’t think of anything lonelier than spending the rest of my life with someone I can’t talk to, or worse, someone I can’t be silent with.”  It seems to me that the deepest communication between persons occurs in silence.

A friend of mine, a Benedictine monk by the name of Brother Linus, spent many years working with deaf people.  I asked him to tell me something about the hearing impaired that most of us don’t know.  He responded: “If you ever see the deaf communicate, they do so silently.  This is how God communicates with us most of the time.”  Hmm…  God communicates with us in silence.  Maybe that’s why Jesus groaned when He healed the deaf man in Mark 7.  Perhaps Our Lord realized all too well that, once this man had his hearing restored, the intimate communication that had existed between God and him would be forever disrupted.  The sights of this world can distract us from loving God, but so too can the world’s noise.  While our eyes are equipped with eyelids, it is sometimes much harder to stop our ears.  When Jesus pronounced the word Ephphatha (Be opened), He may have been bestowing a hardship as well as a blessing.

Here I must ask myself about my own communication with God.  Is there some place where I can go to gain a temporary refuge from the world’s noise?  Have I grown accustomed to communicating with God in silence?  Do I feel at home sitting in His presence without saying a word?  Does my silence before God speak volumes?  Is it like the silence of a couple who has had a long and happy marriage?  That, I think, must be the epitome of prayer.