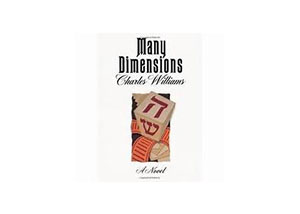 Homily for the First Mass of Father David Matthew Anthony

Thus should one regard us: as servants of Christ and stewards of the mysteries of God.  Now it is of course required of stewards that they be found trustworthy.

Not long before I entered the seminary, my mother read me what, in my opinion, is one of the most important books regarding the awesome responsibilities of the priesthood.  The book is not a lofty treatise on Holy Orders.  Rather, it is a popular novel, Many Dimensions, written by Charles Williams, a Roman Catholic.  Williams, as some of you know, was one of the Inklings, an Oxford literary circle that included such distinguished writers as J.R.R. Tolkien and C.S. Lewis.

Many Dimensions, published in 1931, is a real page turner.  It is the riveting account of Sir Giles Tumulty, an unscrupulous explorer and archaeologist who, while in Baghdad, manages to procure a mystic Stone which once adorned the crown of no less than King Solomon, Son of David!  The Stone, a white cube measuring about a half inch every way, is inscribed with the Tetragrammaton, the four Hebrew letters that spell out the sacred name of God.  The artifact confers on the one who wields it the power to travel through space and time as well as the ability to know the thoughts of others.  It can bestow health and woe, death and unending life.  Amazingly, when cut in two, each of the halves assumes the size of the original with no diminution of power.

Alas!  Sir Giles has no qualms about subjecting the Stone to all sorts of ungodly experiments.  In one such diabolical trial, he informs an eager laboratory assistant by the name of Elijah Pondon that the Stone will allow him to travel back in time.  Giles then instructs Pondon to use the Stone and wish himself back to where he was twelve hours before the present moment.  The obedient assistant vanishes, and we learn that Sir Giles has unwittingly sent him into a never-ending time loop.  When the unfortunate Pondon relives the aforesaid twelve hours, he is sent back twelve hours to where he originally wished himself, only to relive the same twelve hours over and over ad infinitum.

Others attempt to exploit or manipulate the Stone for less than noble purposes.  In the end, however, all who do so get their just desserts.  Williams seems to describe the demise of Sir Giles with particular glee.  Admittedly, I too share the glee.

For at once the light and with it the pain passed through him, dividing nerve from nerve, sinew from sinew, bone from bone.  Everywhere the sharp torment caught him, and still, struggling and twisting, he was dragged down the curving spirals nearer to the illumination into which he was already plunged….  He was doing, it seemed, innumerable things at once, all the things that he had ever done, and yet the whole time he was not doing, he was slipping, slipping down, and under and over him the Glory shone, and sometimes it withdrew a little and then pierced him again with new agony. And now he was whirling round and round, having no hold above or footing below, but being lost in an infinite depth. Above him the light was full of eyes, curious and pitiless, watching him as he had often watched others, and a subtle murmur, as of some distant words of comment or of subdued laughter came to him. From the spirals of time and place he felt himself falling, and still he fell and fell.[1]

Among Williams’ cast of characters, there is one whose relation to the Stone is in no way self-serving.  Chloe Burnett, attractive, twenty-five-year-old secretary to England’s Chief Justice, resists the temptation to use the relic from Solomon’s crown to her own advantage.  Instead, she acts as a steward of the sacred.  Chloe’s selfless submission to the power of the Stone wins her its protection against the forces of evil, but her efforts to restore the Stone’s fragmented unity and thereby pull the world back from the brink of chaos ultimately cost her her life.  We are nonetheless left with the abiding sense that Chloe’s soul achieves that peace and joy which surpass all understanding.  “[H]er inner being,” we are told, “had been caught with the Stone into the Unity”[2]

It doesn’t take a rocket scientist to figure out the lesson Charles Williams is trying to convey: Dire consequences await those who seek to exploit the sacred; ultimate fulfillment awaits those who seek to serve as its stewards.

In our second reading today, it is clear that Saint Paul believes that he has been entrusted with the sacred, a reality far transcending anything mere humans could devise.  He asserts:

Now I want you to know, brothers, that the gospel preached by me is not of human origin. For I did not receive it from a human being, nor was I taught it, but it came through a revelation of Jesus Christ.[3]

Elsewhere the Apostle expresses his conviction that he will have to render an account of his service.  He says:

If I preach the gospel, this is no reason for me to boast, for an obligation has been imposed on me, and woe to me if I do not preach it!  If I do so willingly, I have a recompense, but if unwillingly, then I have been entrusted with a stewardship.[4]

Isn’t this true of all priests?  Are we too not stewards of the sacred?  Haven’t we all been ontologically conformed to Christ and thereby irrevocably entrusted with Transcendent Reality?  What then if we should misuse our power to administer the sacraments, to proclaim the word of God, to teach in the name of Jesus?  Will there not be dire consequences?  Certainly the laity will suffer.  Saint John Fisher warns that “when the priests are negligent in the performance of their duties the people fall headlong into the abyss of all evils.”[5]  What about the impact of our infidelity on ourselves?  I recall reading that when Saint Mary Magdalene de Pazzi had visions of purgatory, she was reduced to tears upon seeing the priests there confined.  If purgatory is worse for priests than for those not ordained, might not the same be said of hell?  (By the way, I learned of Saint Mary Magdalene de Pazzi’s description of purgatory only years after my ordination.  I felt as though I had been tricked into signing a contract without reading the fine print!  In the words of Gene Wilder in The Producers, “No way out!  No way out!”)  O people of God, inasmuch as the Almighty has entrusted His priests to you, you too are stewards of the sacred.  Pray for your priests lest we prey on you.  Talk to God about your priests lest we fail to speak to Him about you.  There is much at stake.

What of those priests who prove themselves worthy stewards of the sacred?  Of their heavenly reward I believe none of us has even the faintest inkling.  Saint John Vianney exclaimed:

Oh, how great is a priest! The priest will not understand the greatness of his office till he is in Heaven. If he understood it on earth, he would die, not of fear, but of love.[6]

If God clothes even the lilies of the field with a glory far surpassing that of King Solomon,[7] the earthly crown of David’s son must be as nothing when compared to the heavenly diadem awaiting the faithful priest.

Ad multos annos, Father David Matthew Anthony!  May you prove a trustworthy steward of the sacred in all the many dimensions of your priesthood!

[5] The Defense of the Priesthood, “Refutation of Luther’s Third Attack.”

[6] Catechism on the Priesthood.