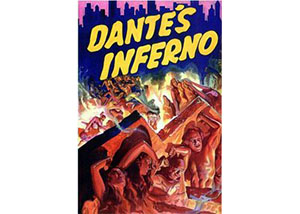 When I taught at Bethlehem Catholic High School in the 1990s, there was a custom that each of the four classes could decorate a hallway for Catholic Schools Week.  One year, the seniors, who had been reading Dante’s Divine Comedy in English class, hit upon a very creative idea.  Those of you who are familiar with the Divine Comedy know that it is a very long poem in which Dante describes his journey through hell (Inferno), purgatory (Purgatorio), and heaven (Paradiso).  The senior class decided that they would decorate one end of their assigned hall to look like hell.  Was it a coincidence that their English teacher had her classroom at that end of the hallway?  The middle section of the hall would be decorated to look like purgatory, and the far end of the hall would ultimately resemble heaven.

The seniors began putting up their hellish decorations.  There were depictions of little devils running around with pitchforks, faculty being boiled in caldrons of oil, and all manner of infernal torments inflicted on various members of the administration.

Guess what happened.  If you have ever raised teenagers or are at all familiar with human nature, you can probably tell me.  The seniors had so much fun putting up the hell decorations that they forgot all about purgatory and heaven.  In no time at all, the whole hall looked like Dante’s Inferno.  A big sign read:  ABANDON ALL HOPE, YE WHO ENTER HERE.  The faculty was upset.  One of them complained to me: “Father, have you seen senior hall?  It looks like hell up there!”

For my part, I was not at all surprised or upset.  The seniors had simply given visual expression to a truth we know all too well.  Philosopher Simone Weil, in her 1952 book Gravity and Grace, said it best:  “Imaginary evil is romantic and varied…  Imaginary good is boring…”  She’s right.  Imaginary evil is romantic and exciting.  That’s why it’s not all that difficult to make a gripping movie about sin and evil.  Hollywood deals with images, and imaginary evil is exciting.  That’s why, too, it’s a lot more challenging to make a really fine movie about goodness, virtue, and holiness.  Imaginary goodness is boring.

Reality, however, is quite the opposite.  Simone Weil says that “real evil is gloomy, monotonous, barren, boring.”  Ask anyone who is enslaved to sin.  In his book, The Screwtape Letters, C.S. Lewis provides advice from one demon to another on the best ways to get a soul to hell.  In Letter XII, we have a really chilling description of the final stages of sin:

As this condition becomes more fully established, you will be gradually freed from the tiresome business of providing Pleasures as temptations….  You no longer need a good book, which …[the man] really likes, to keep him from his prayers or his work or his sleep; a column of advertisements in yesterday’s paper will do.  You can make him waste his time not only in conversation he enjoys with people whom he likes but also in conversations with those he cares nothing about, on subjects that bore him.  You can make him do nothing at all for long periods.  You can keep him up late at night, not roistering, but staring at a dead fire in a cold room.  All the healthy and outgoing activities which we want him to avoid can be inhibited and nothing given in return, so that at last he may say, as one of my own patients said on his arrival down here, “I now see that I spent most of my life in doing neither what I ought nor what I liked.”

The Spanish mystic Saint John of the Cross, who lived in the sixteenth century at a time when the New World was opening up to the astonished eyes of Europe, likens the Trinity to “strange islands.”  In Stanza 14 of The Spiritual Canticle, he writes:

Strange islands are surrounded by water and situated across the sea, far withdrawn and cut off from communication with others.  Many things very different from what we have here are born and nurtured in these islands; these things are of many strange kinds and powers never before seen by humans, and they cause surprise and wonder in anyone who sees them.  Thus, because of the wonderful new things and the strange knowledge (far removed from common knowledge) that the soul sees in God, she calls him “strange islands.”

People are called strange for either of two reasons:  They are withdrawn from others; or, compared with others, they are singular and superior in their deeds and works.  The soul calls God “strange” for these two reasons.  Not only is he all the strangeness of islands never seen before, but also his ways, counsels, and works are very strange and new and wonderful to humans.

It is no wonder that God is strange to humans who have not seen him, since he is also strange to the holy angels and to the blessed.  For the angels and the blessed are incapable of seeing him fully, nor will they ever be capable of doing so.  Until the day of the Last Judgment they will see so many new things in him concerning his deep judgments and his works of mercy and justice that they will forever be receiving new surprises and marveling the more.  Hence not only humans but also the angels can call him “strange islands.”  Only to himself is he neither strange nor new.

Well, how do you like that?  The doctrine of the Trinity reminds us that God—Father, Son and Holy Spirit–is more than a simple idea or mental abstraction.  He is a profound Mystery with fathomless depths of joy!