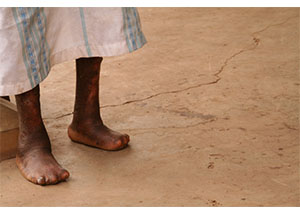 And a leper came to him, entreating him, and kneeling down he said, “If thou wilt, thou canst make me clean.”

Once, when I was about eight or nine years old, I said to my sister Marybeth, “Hey, Marybeth!  Wouldn’t it be neat if we couldn’t feel pain?  That way, we’d never get hurt.”

Marybeth, who is six years older than I am and a thousand times wiser, was even then a devotee of science.  She responded with an emphatic:  “Are you kidding?  Pain is the body’s way of letting us know something’s wrong.  Suppose, Bernard, you’re walking down the beach and you cut your foot on a seashell.  If you didn’t feel pain, you wouldn’t realize it.  The cut might become infected, and by the time you discovered the problem, you might be in big trouble.  Sometimes pain is a good thing.”  Marybeth’s final pronouncement still rings in my ears:  “Healthy bodies feel pain when they are wounded.”

In our First Reading[1] and in our Gospel,[2] we hear all about the dreaded disease of leprosy, known today as Hansen’s disease.  As a young boy learning about the Bible, I was under the impression that leprosy was not much more serious than a severe skin rash.  Nothing could be further from the truth.  Comparing leprosy to a skin rash is like comparing a hand grenade to popcorn!  Listen to just part of a description of leprosy taken from the classic biblical commentaries of the Reverend William Barclay.  These commentaries, though written by a Protestant, were a favorite source of inspiration for none other than Archbishop Fulton Sheen.  In the following passage, Barclay is describing what is known as “anesthetic leprosy.”

[I]n this kind of leprosy the nerve trunks are affected.  The infected area loses all sensation.  This may happen without the sufferer knowing that it has happened; and he may not realize that it has happened until he suffers some burning or scalding and finds that there is no pain and no feeling whatsoever where pain ought to be.  As the disease develops the injury to the nerves causes discoloured patches and blisters.  The muscles waste away; the tendons contract until the hands become like claws.  There is always disfigurement of the finger nails [sic].  There ensues chronic ulceration of the feet and of the hands.  There comes the progressive loss of fingers and of toes, until in the end a whole hand or a whole foot may drop off.  The duration of the disease is anything from twenty to thirty years.  It is a kind of terrible and progressive death of the body.[3]

So you see, in one particular kind of leprosy, the individual loses the ability to feel pain.  Pain, as my sister Marybeth pointed out to me with great fervor, is sometimes a good thing.  Healthy bodies feel pain when they are wounded.

I’m sure many of you know about Father Damien of Molokai, who was canonized by Pope Benedict XVI on October 11, 2009.  Father Damien was born in Belgium in 1840.  At the age of thirty-three, he went to minister in the leper colony on the Hawaiian island of Molokai.  He cared for the physical as well as the spiritual needs of the lepers and greatly helped them to improve their overall living conditions.

In his letters to friends, Father Damien would write that, after a hard day’s work, he took great pleasure in soaking his tired feet in warm water.  First, he would pour boiling water into a bucket.  Then he would pour just the right amount of cold water into the bucket to bring its contents to the desired temperature.  Finally, he would plunge his aching feet into the bucket and find relief.

One night, twelve years after his arrival on Molokai—it was Holy Saturday night—Father Damien went through the oft-repeated ritual of soaking his feet.  When, however, it came time for putting his feet into the water, he made a series of startling discoveries.  He saw that the skin was literally being seared off his feet, because he had forgotten to mix the cold water with the boiling water.  He also realized that he did not feel a bit of pain, and that this meant he had contracted leprosy.  The next day, Easter Sunday, Father Damien stunned his congregation by beginning his homily with the words, “We lepers…”

Native American wisdom compares the human conscience to a spiked wheel.  Whenever we do something wrong, the wheel spins and causes us twinges of real guilt.  If, however, we ignore conscience, the spikes get worn down over time.  Eventually conscience fails to operate at all.  Again, a healthy conscience pricks us whenever we willfully disobey God’s law.

A number of Catholic saints have compared conscience to a piece of clear glass.  Consider, for example, your car’s windshield.  If you are driving into sunlight, you are bothered by even the smallest speck of dirt on your windshield.  If you are driving away from the sun’s light, there can be quite a bit of dirt on your windshield before you ever notice it.  If for some reason you are driving in pitch darkness without your headlights, you fail to notice the dirt at all.  I repeat: a healthy conscience is downright annoying when we sin.

Here’s the point:  Sin is like leprosy.  Over time, it deadens the conscience’s ability to cause twinges of guilt.  As the disease of sin progresses, as we continue to ignore whatever pricking of conscience we may still feel, as we move farther and farther from the light, the less we feel guilt.  We might even, like the nine-year-old Bernard Ezaki, come to believe that the absence of guilt pain is a good thing.  Remember, a healthy conscience causes twinges of guilt when we sin.

How healthy is my conscience?  How healthy is the conscience of our society?  The very first God-given command recorded in the book of Genesis is, “Be fruitful and multiply.”[4]  Yet our modern world pats itself on the back for embracing contraception, and instead proclaims, “Blessed are the barren, and the wombs that never bore.”[5]  Scripture says, “Thou shalt not take the name of the Lord, thy God, in vain.”[6]  Yet in the name of free speech, our ears and eyes are assaulted with all manner of profanity.  God says, “Remember to keep holy the Lord’s Day,”[7] but we, like the Nazis and Communists, fill our Sunday mornings with sporting events and other activities that lure young people and their families from church.   The Fourth Commandment urges us to honor our parents.[8]  As a corollary, it also lays upon all adults the obligation to be worthy of children’s honor.  Yet our society gives our young people social media and iPhone apps that endanger not only their virtue, but even their lives.  God says, “Thou shalt not kill,”[9] and our society rejoices in upholding abortion and even euthanasia as so-called “rights.”  The Lord commands us to be pure, and yet we flood the internet with pornographic images that are every bit as addictive as cocaine.  Furthermore, we are enshrining as a right the very sin for which Sodom was condemned.  God says, “Thou shalt not bear false witness,”[10] and in spite of this, we value political correctness over truth.  Finally, Our lord says, “Do to others what you would have them do to you.”[11]  Nevertheless, we in this country—from our highest political officials on down—delight in hurling pejorative names at one another.

Our consciences no longer cause us twinges of guilt.  The vehicle of our culture is headed into night.  The little wheel within us spins to no avail because the spikes are gone.  In short, our consciences are infected with anesthetic leprosy!

Still, there is hope.  Our consciences may be numb, but not yet are we rendered deaf and dumb.  If we listen in silence, I think each of us can hear these words, which the poet Adelaide Proctor puts into the mouth of the Blessed Virgin Mary:

From thy bitter past,
Welcome, my child! oh, welcome home at last!

Kind hearts are here; yet would the tenderest one
Have limits to its mercy: God has none.
And man’s forgiveness may be true and sweet,
But yet he stoops to give it. More complete
Is Love that lays forgiveness at thy feet,
And pleads with thee to raise it. Only Heaven
Means crowned, not vanquished, when it says “Forgiven!”[12]

In response, our tongues can even now articulate a final prayer:

Dear Lord, our consciences are numb

Even as we pray: “Thy Kingdom come!”

From our soul remove the stain.

Then we shall heed our conscience pain.

So as to gladden Heaven and Heaven’s Queen.