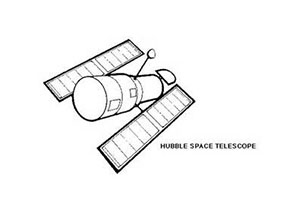 The Hubble Space Telescope,[1] named in honor of astronomer Edwin Hubble, was launched into low earth orbit in 1990.  With its 7.9-foot mirror, it is still in orbit and may continue to operate until 2030 or even 2040.  Because it travels outside earth’s atmospheric distortion, the Hubble Telescope is able to transmit extremely high resolution images with hardly any background light.

What have astronomers learned from the Hubble Telescope?  Here are just some of their tantalizing discoveries:

In short, the Hubble Space Telescope, because it is unaffected by distortions caused by earth’s atmosphere, has proven to be the source of some amazing scientific discoveries.  It has cleared up a number of astronomical quandaries and, at the same time, has raised even more puzzling questions.

On December 8, 1933, in Rome, at the canonization of Saint Bernadette of Lourdes, Pope Pius XI actually compared the saints to the telescopes of astronomers.  “Instruments,” said the Pontiff, “permit us to see stars which the naked eye could never discover.  Through saints, we learn to see those eternal truths which the world’s common day veils from our feeble eyes.”[2]

What a remarkable statement!  If we wish to gain a deeper love and understanding of the Divine Majesty, we need only turn to the saints who, while on earth, learned to see through the all-too-prevalent worldly distortions of divine truth and who, now in heaven, see the face of God with unclouded vision.  If we wish to grow closer to God, all we have to do is get to know the saints, not only through reading and study, but also through prayer and frequent recourse to their intercession.

On All Saints Day, we commemorate the whole company of the blessed in heaven.  Each one of the countless saints whom the Church extols can bring God into sharper focus for us.  The saints are our brothers and sisters in the Faith.  They are our role models and exemplars.  They are our patrons and intercessors before God.  They are the orbiting space telescopes through which, even now, we gain a really good glimpse of the divine.

[1] All information in this article about the Hubble Telescope comes from Wikipedia.

[2] Quoted in The Song of Bernadette, by Franz Werfel.