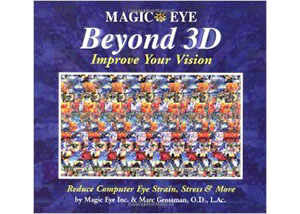 I have often told Jesus that if I had to invent a religion, I could not come up with a seemingly stranger one than Catholicism.  How can the Eucharist, what appears to be bread and wine, really be the Body and Blood of Christ?  How can the Mass, a ceremony in the here-and-now, really transport us to the Last Supper or to the foot of the Cross?  How can a priest, a man chosen from among men, truly be an alter Christus, another Christ?  If you yourselves have pondered these questions, perhaps this analogy will help.

I hold in my hand, mes amis, a Magic Eye book.  It is filled with what are called stereograms.  Sometimes they are referred to as autostereograms.  A stereogram is a two-dimensional picture that, when viewed in a particular way, reveals a three-dimensional image.  Here on page 22, for example, is what at first glance appears to be a piece of weird giftwrap.  I am told, however, that when beheld in just the right manner, it is actually a picture of a girl pouring the contents of a test tube into an Erlenmeyer flask.

The problem is that, in order to see the hidden three-dimensional image, you need stereoscopic vision, that is, two eyes.  Since I have only one functional eye, and not a very good eye at that, I have resigned myself to the knowledge that, try as I might, I shall never glimpse the three-dimensional images concealed within two-dimensional stereograms.  I can try until the cows come home, but my efforts to see the hidden pictures will all be in vain.

Nonetheless, even though I can’t see the three-dimensional pictures, I know for a certainty that they are there.  I know this for two reasons.  First, the authors of the Magic Eye books tell me they are there.  Why shouldn’t I believe the authors?  Second, many two-eyed people whom I trust say that they can see the images.  I have no reason to doubt these individuals.  Just ‘cause I can’t see the pictures doesn’t mean they ain’t there.

It’s like that with the Eucharist, with the Mass, and with priests.  Some mystic saints, such as Saint Catharine of Siena and Saint Faustina Kowalska, to mention two from the past, are gifted with what we might call a third eye, not a literal anatomical eye but a special sight.  This additional eye, so to speak, allows them actually to see Jesus in the Eucharist.  They can, in some cases, distinguish a consecrated Host from unconsecrated bread.  For some of these mystics, the Mass itself is a kind of stereogram.  Rather than seeing only an aging man moving a dish and a cup around on a table, they find themselves present at the Last Supper or standing at the foot of the Cross.  What would these three-eyed individuals see when looking at a priest?  I am no mystic.  I have enough trouble seeing what most people see without having to worry about seeing what most people don’t.  I would imagine, however, that the third eye would reveal a man whose consecrated hands bear the emblems of Christ crucified.

I would venture to guess that you too don’t have that third mystic eye.  We must, therefore, resign ourselves to the fact that, no matter how hard we try, we shall never be able to see Christ hidden beneath the appearances of bread and wine, or the Last Supper and the Cross concealed in Holy Mass, or the glorified wounds of Jesus mystically imprinted on the hands of priests.  We can, however, believe that Christ is in these sacred realities for two reasons.  First, Jesus Himself assures us of His Presence in the Eucharist, in the Mass, and in the priest.  “This is My Body,” He says.  “This is the chalice of My Blood.”  Why shouldn’t we trust Jesus?  Second, down through the ages, the Church and her saints have proclaimed that Christ is in the Eucharist, that He offers Himself at Mass as He did at the Last Supper and on the Cross, that He is permanently united to every priest.  Why should we doubt such a cloud of witnesses?  Just ‘cause we can’t see Jesus doesn’t mean He ain’t there.

Come to think of it, maybe it’s a good thing we don’t see the thrice-veiled Jesus.  If we did, every time we’d receive Communion, every time we’d assist at Holy Mass, every time we’d encounter a priest, we’d be so overcome with a desire for heaven that we might find life on planet earth much too hard to bear.  Perhaps it is better not to see, better that we don’t have that third eye.

‘Neath which the Bridegroom doth recline!

If for us ‘twere otherwise,

This present life we should despise.

For even one slight glimpse of Him

Would render earth an exile grim.

Better blind and steeped in night

Then, having seen, to lose the sight,

But what our eyes now fail to see,

A food which Mass and priest provide,

We shall tread our pilgrim way

Until at last there comes the day

When the dark scales fall from our eyes

And we see the Groom in Paradise.