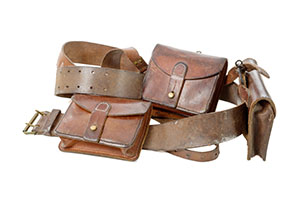 He instructed them to take nothing for the journey but a walking stick—no food, no sack, no money in their belts.  They were, however, to wear sandals but not a second tunic.

One of my closest friends in the priesthood is Father Frans Berkhout, former principal of Allentown Central Catholic High School.  Father Berkhout related to me a conversation he had with a marine colonel back in 1998, shortly after the movie Saving Private Ryan hit the theatres:

FR. BERKHOUT:           Not for nothing, Colonel, but I’m amazed at how many young Americans lost their lives coming ashore on the beaches of Normandy.  The soldiers were so weighted down with gear that half of them drowned in the water, and many of the rest were picked off by the Germans.  Why was the Army carrying so much gear?

MARINE COLONEL:     Well, Father, those young men needed to carry enough food, water, ammunition, and supplies to last them eighteen hours.  That’s how long we figured it would take before they got relief.

FR. BERKHOUT:           I don’t know, Colonel.  It seemed that all that weight they were carrying was doing them more harm than good.  What do you think of this idea?  What if there had been a Speedo Brigade?

FR. BERKHOUT:           A Speedo Brigade, Colonel!  The first wave of men would have come ashore with nothing but a Speedo, a helmet, a grenade belt, and a rifle.  Because they would have been so unencumbered by gear, they would have made it up the beach.  They would have shocked the Nazis into disbelief, and once they had taken the beach, then you could have brought in the beer and pizza!  What do you have to say to that?

Father Frans told me the poor colonel looked as though he had been talking to a madman.

But Father Berkhout has a point.  If we go through war, if we go through life, weighted down with material possessions and with unwholesome relationships and desires, we’re easy prey for the enemy.  That is why Our Lord tells His disciples not to carry food with them, not even a sack, money, or an extra tunic.  If we are overly concerned about the things of this world, we’ll lose the battle.

Here is another story.  One Saturday night, while I was still living at Notre Dame Rectory, I went to bed, but not before downing a rather large bowl of raisin bran cereal followed by two peanut butter and jelly sandwiches and a banana.  I fell into a deep sleep.  The next thing I knew, someone was ringing the doorbell.  I glanced at my alarm clock.  Three in the morning!  Well, what was I to do?  I put on my robe, went downstairs, opened the front door, and there, standing before me, was a young man, slightly disheveled, dressed in a tuxedo.  “Can I come in?” he asked in a forlorn voice.  “I need to talk.”  I ushered the fellow into the front office, we sat down, and he told me his saga.

He had just gotten married at Saints Simon & Jude Church the previous afternoon, and his rather lavish wedding reception had been at the Hotel Bethlehem.  These are his own words, as nearly as I can recall them:

When the clock struck ten, my new bride and I went upstairs to the hotel’s bridal suite.  At last I would be alone with my beloved!  I had been waiting for this moment for years.  But hardly had I carried her across the threshold, when there came a knock at the door.  I opened the door and found myself facing one of the hotel employees.

“I have your wedding gifts, Sir,” he stated.

“My what?” I asked in astonishment.

“Your wedding gifts,” he repeated.

“Oh, how wonderful!” squealed my bride from behind me.  “Just tell the man to put them on the bed.”

On the bed? I thought.  What’s wrong with this picture?

The hotel worker came in with a whole cartload of wedding presents and piled them high on our bed.  I couldn’t believe it.  No sooner had he left when there was another knock at the door.  My bride called out, “Come in!” and a whole bevy of bridesmaids descended on us and began opening up the gifts, ooh-ing and ah-ing over every item.  The woman I had married was so caught up with her friends and with the presents she had received that she apparently forgot all about me.  I sat off in a corner for an hour or two, watching my wife and her bridesmaids making an enormous fuss over all the gifts.  And then I came here.  Father, I don’t think she even realizes that I’ve left.

The young groom and I sat in silence for some moments.   I could tell he was on the verge of tears.  I finally broke the silence by saying something less than pastoral.

“I hate to say it, but the woman you just married is a big dope. What kind of person would put material possessions and friendships before such an important relationship?”

“I love her,” he replied.  He extended his hands in a pitiful, pleading gesture, and it was then that I saw the deep wounds in his palms.  With that, he suddenly vanished into thin air.

It seemed only seconds later that my alarm clock was beeping.  It was time for me to get up for the 7:30 AM Mass.  Since that time, I have never eaten a bowl of raisin bran, two peanut butter and jelly sandwiches, and a banana before going to bed!