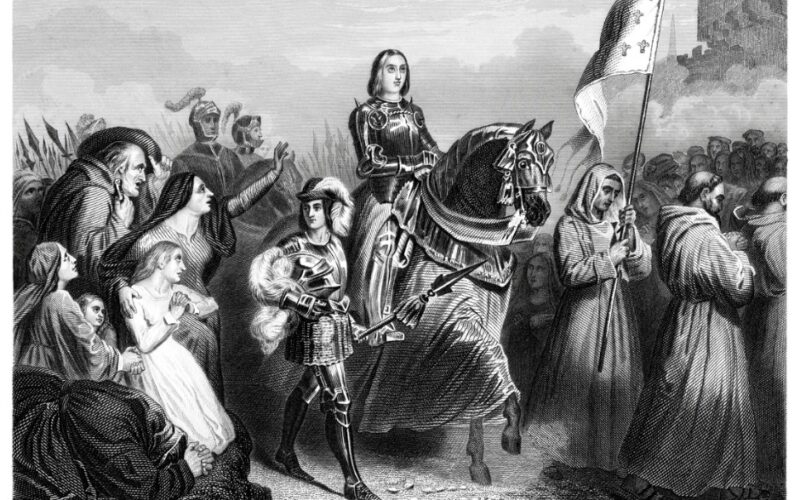 For the Holy Spirit will teach you at that moment what you should say.

Remember, you are not to prepare your defense beforehand, for I myself shall give you a wisdom in speaking that all your adversaries will be powerless to resist or refute.

Sanctifying grace is the gift of God which gives us a share in His own life and makes us holy.  When we possess sanctifying grace, it may be said that we are in the state of grace.

Actual graces, by contrast, are the promptings given for those extraordinary moments when we need special inspiration by the Holy Spirit.  The Basic Catechism simply states:

Actual graces are temporary helps from the Holy Spirit which make us able to know and do what God expects of us at a certain moment.  Actual grace may also be described as a temporary light for the mind or strength for the will by which God helps us to avoid sin or to do something good.

Now, ladies and gentlemen, I would like to give you three concrete instances of actual grace: one historic, one dramatic, and one utterly fantastic.

The first comes from the life of Saint Joan of Arc.  At her trial, one of her cruel interrogators tried to trap her in her speech by asking, “Are you in a state of grace?”  Mark Twain, in his wonderful but little-known novel, Joan of Arc, speaking through one of his characters, tells what happened next:

There was no hope, no way out of the dilemma; for whether she said yes or
whether she said no, it would be all the same–a disastrous answer, for
the Scriptures had said one cannot know this thing.  Think what hard
hearts they were to set this fatal snare for that ignorant young girl and
be proud of such work and happy in it.  It was a miserable moment for me
while we waited; it seemed a year.  All the house showed excitement; and
mainly it was glad excitement.  Joan looked out upon these hungering faces
with innocent, untroubled eyes, and then humbly and gently she brought
out that immortal answer which brushed the formidable snare away as it
had been but a cobweb:

Ah, you will never see an effect like that; no, not while you live.  For a
space there was the silence of the grave.  Men looked wondering into each
other’s faces, and some were awed and crossed themselves; and I heard
Lefevre mutter:

“It was beyond the wisdom of man to devise that answer.  Whence comes this
child’s amazing inspirations?”[1]

Her inspirations were actual graces!

The second example of actual grace comes from Canadian Pro-Life activist Stephanie Gray, who spent twelve years as the executive director and co-founder of the Canadian Center for Bioethical Reform.  Today she writes and speaks on behalf of her ministry, Love Unleashes Life.  Here is what Stephanie said in Episode 9 of the podcast, The Matt Fradd Show, which aired on June 20, 2019:

I once debated a [pro-abortion] philosophy professor where I found myself temporarily stumped.  He started the debate by saying to the audience: “I’m going to agree for the sake of discussion that the embryo is a human person with the same right to life as all of us.  But abortion is justified in the following manner:  Imagine that you are a parent and you have a born child and you love your child, and your child suddenly gets very sick.  [It turns out that] your child has kidney disease and is going to die unless your child gets a kidney transplant. Now imagine that you are the only person in the world with the right body type so as to be able to donate one of your kidneys and, in doing so, save your child’s life.  No one else has the capacity to be able to do this.  Would it be nice of you, the parent, to give one of your kidneys to your child?  Yes, it would be nice.  Would it save your child’s life?  Yes, it would.  Would it kill you?  No, you’ve got two kidneys.  But should the law force a parent to give their kidney to their child?  No!  And even from a Catholic perspective, we know that when it comes to organ donation, there isn’t a moral obligation to donate one’s organs.  It can be an act of generosity in the right circumstances, but no moral duty.  And so just as a parent should not have a legal duty to give their born child their kidney, a parent in the case of the mother, should not have a legal duty to give her preborn child her uterus.”

So I’m sitting there in front of 200 students, dying inside, totally panicked and trying to look calm, cool, and collected.  So I’m fake note writing as if I have this impassioned response.  And being a person of faith, I immediately started praying, Come, Holy Spirit.  Lord Jesus, what do I say?  And I actually, I think I’ve experienced this only once in my life, tangibly sensed God speaking to me—very clearly, not audibly, but in a sentence that I can repeat exactly as He said it.  He called me by name.  He said, “Stephanie, I made the uterus for a different purpose.”  Now that’s all God gave me.  I prayed, Okay, give me a little more.  And then, literally as my opponent was wrapping up his opening remarks, just before I then had to get up and give a response, it was the moment of epiphany.  The scales fell from my eyes.  I had this lightbulb go off, and I thought, I’ve got it!

So I got up in front of everyone, and I said, “Professor S. makes a very compelling remark, a very strong argument, until we ask ourselves a question.  And the question we have to ask ourselves is this:  What is the nature and purpose of the kidney versus the nature and purpose of the uterus?  Because when we ask and answer that question, we come to see why a parent should not be legally obligated to give one but actually should be legally obligated to give the other.  The kidney exists in my body for my body.  The uterus is very different. The uterus exists in my body every single month getting ready for someone else’s body.  Every single month, my uterine lining is thickening in great expectation for the implantation of the next generation.  Therefore you can see the uterus is unique from all the other body parts in that it exists more for my offspring than for me, and they can therefore claim a right to that in a way the preborn or born couldn’t claim a right to get my kidney or this or that organ.”

The good news is that it was reported back to me that the professor told his class a couple days later that he was up all night trying to think of a response.  Praise Jesus![2]

My third illustration of actual grace is somewhat more homespun.  It occurred during my first year at seminary.  We would-be priests were attending the funeral of a first-year seminarian who had died tragically.  The priest homilist, I’m afraid—at least it seemed to me at the time—gave the grieving family not one word of consolation, not even one bit of hope for resurrection.  “You’ll be carrying this sorrow to your graves,” he asserted.  How devastated the young man’s parents must have felt!  They must have been utterly miserable.

After Holy Communion, however, the rector of our seminary got up to speak.  Msgr. B., God rest his soul, was normally known for putting his foot into his mouth.  He had a unique knack for saying the wrong thing at the wrong time.  The moment I heard him speak, I braced myself for another funereal faux pas.  But what came out of Monsignor’s mouth was a consolation I shall never forget:  “Mr. and Mrs. L., it is well known by all of us that your son had a tremendous devotion to Our Lady.  Every day after Mass he could be seen offering his prayers of thanksgiving at Mary’s altar.  Could we ever imagine that Our Mother of Consolation would abandon such a son or leave his family bereft of hope?”

I wept for sheer relief and gratitude.  If that wasn’t a case of actual grace being granted to Msgr. B., I don’t know what was!  I left the church a believer.

Saint Joan of Arc, Stephanie Gray, and my seminary rector all experienced the power of actual grace in their lives, the momentary inspiration of the Holy Spirit for a specific purpose.  I can’t help thinking of the lyrics of an old Gospel song, which speaks of God this way: “He may not come when you want Him, but He’s always right on time!”

[2] Based on an unofficial transcript of the podcast episode.