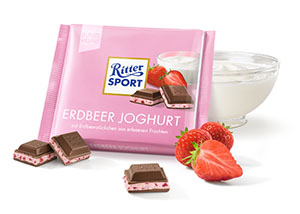 And wherever he [Jesus] went, into village or hamlet or town, they laid the sick in the market places, and entreated him to let them touch but the tassel of his cloak; and as many as touched him were saved.

Years ago, my friend Mary gave me a whole box of chocolates with strawberry yogurt centers.  One afternoon, I opened the box and began devouring the candies one after another.  They were very good indeed!  I had eaten them all, except for one, and that is when I noticed the German writing on the side of the box:  Gefüllte Vollmilchschokolade mit Magermilchjoghurt-Erdbeer-Creme.  Hmmm.

I later asked Mary, “Where did you get those candies?”  She replied: “A student of mine goes to Germany once a year and brings back one box of the chocolates.  This year she gave the box to me, and I gave it to you”

I felt so very humbled.  I had been scarfing down those candies as if they had been a trivial gift, when all the while they were quite costly—if not in terms of money, then in terms of scarcity, in terms of effort, in terms of love.  I wish I had appreciated them more while I was eating them.

In the Gospels, it sometimes seems as though Our Lord is healing people right and left.  We might get the impression that it cost Him nothing to perform these miracles.  Yet I think that is not the case.  Each mighty deed Jesus performed prior to His Passion was purchased on credit, as it were.  Sooner or later, it would have to be paid for with His own Blood.  Every time Our Lord drove out a demon, gave sight to the blind, cleansed a leper, or made the lame walk, it reinforced the inevitability of the Cross.  To put it bluntly, it cost Him.  The people who encountered Jesus during His public ministry could not possibly have known this, but you and I know it.

The same is true, not only of the gifts that were bestowed before the Passion, but even after.  Every grace that we receive from God has been paid for by the death of Jesus.  All the blessings and all the sacraments that come our way cost Christ.  He paid for them with His Precious Blood.  God forbid that we take them for granted as if they were cheap candy!