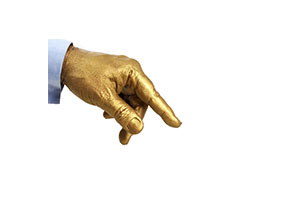 I am a great fan of good children’s literature.  One of my favorite books for young people is The Adventures of King Midas by the British author Lynne Reid Banks.  Banks got a lot more notoriety for having written The Indian in the Cupboard and its sequels, but, of all her books, The Adventures of King Midas is, hands down, the one I find most beguiling.  The legend of King Midas of Phrygia (in Asia Minor) goes all the way back to ancient Greece.  In her book, Lynne Reid Banks takes the old tale and gives it a more up-beat spin.

As Banks tells the story, King Midas was in love with gold.  One day, for example, he flew into a rage upon discovering that the golden frames surrounding some newly acquired paintings were gilded wood rather than solid gold.  “I will not be lied to,” he stormed, “not even by a picture frame.”

On another occasion, as the king was strolling in his garden, he suddenly found himself confronted by a tiny old man with a long white beard, puffing away on a cigar that emitted a cloud of green smoke.  The little fellow’s eyes, however, were brilliant in their youthfulness.

“Your Majesty,” asserted the diminutive figure, “I can put a magic spell on your hands so that everything you touch turns to gold.  Would that please you?”

“Yes!  Yes!” cried the monarch, without stopping to ponder the consequences of his affirmation.

The tiny man vanished as abruptly as he had appeared.  King Midas, uncertain as to whether he had been dreaming, steadied himself by reaching out to the nearest tree.  To his utter astonishment, the tree became solid gold!  In a fit of euphoria, Midas ran through the garden, touching everything he could in his delirium.

Stopping by the royal fountain to catch his breath, the king all at once caught sight of his daughter Delia’s pet canary.  The little bird had gotten loose a few days earlier.  Without thinking, Midas held out his finger, and the bundle of feathers flew to the perch.  The instant the creature lighted, it was transformed into lifeless gold.  The king thrust his hand into the fountain’s cascading water, and immediately the drops became as golden pebbles in the watery depths.

Hurrying back to the palace, Midas passed through the French windows that led from  the garden into his dining room.  Without thinking, he grabbed an apple from a bowl full of fresh fruit to satisfy his growing hunger.  He tried to bite into it, and his howls of pain brought his loyal dog bounding to the rescue.  Absently, the king reached down to stroke his attentive pet, and there and then he became the owner of a real golden retriever!  Before long, most of the royal servants fled the palace as they became aware of their master’s enchantment.

After some moments of panic, King Midas got a brilliant idea.  He rushed upstairs, transforming, as he went, all the banisters into precious metal.  He ran into his dressing chamber and ordered his faithful valet to retrieve a pair of ceremonial gloves made entirely of gold thread.  The king quickly slipped on the gloves, and to his relief, he discovered that everything he handled with the gloves remained just as it was.  Whew!  All would be well.  Exhausted, poor Midas collapsed into his bed and thereupon fell into a troubled sleep.

Some hours later, ten-year-old Princess Delia quietly entered her widowed father’s bedroom.  The king had gotten into the nightly habit of reading a bedtime story to his only child.  Delia was perplexed as to why her father had not come to see her this night.  Was something wrong?  When, however, she saw her father fast asleep, she was greatly relieved.  Her relief soon turned to tender concern.  Why ever is he wearing those huge gloves? she thought to herself.  He’ll be so uncomfortable.

The next morning, when King Midas awoke from his slumber, the first thing he saw was the gold statue that had once been his daughter.  He learned a terrible lesson:  Whenever you give secondary things first place, you end up losing what you love most.

Greek legend has King Midas starving to death, unable to eat any food whatsoever.  Lynne Reid Banks’ version has a happier ending, and if you want to know how it turns out, I recommend you read it yourself:  The Adventures of King Midas by Lynne Reid Banks.

The tale of King Midas is a fictitious story about a man who loses his daughter because he puts secondary things first.  Genesis 22 tells of the sacrifice of Abraham, a true story about a man who preserves his son because he puts God first.  Whenever we put secondary things first, we lose what we love most.  When, however, we put God first, even when it seems that all is lost, we end up gaining what is most important.

Poor Abraham had every reason to be grieved and angry with God.  He had everything to lose by sacrificing Isaac.  Isaac was his only heir, heir to the very promise God Himself had made, that Abraham would one day be the father of offspring as numerous as the stars in the sky.  Yet Abraham was willing to obey God at all costs.  As a result, he was not only Isaac’s father, but also, as Saint Paul says[1], he is our father in faith.  He learned from God the very same lesson Christ taught the poet Francis Thompson:

All which I took from thee I did but take,

Not for thy harms,

But just that thou might’st seek it in My arms.

All which thy child’s mistake

Fancies as lost, I have stored for thee at home:

Jesus says: “But seek first the kingdom of God and his justice.”[3]  Am I willing to make God my number one priority, or, if I think about Him at all, do I do so only in my spare moments?  Does obeying God’s will mean more to me than wealth and honor, or am I distracted from heavenly goals by earthly delights?  Do I live day by day in the presence of God, or am I forgetful of Him from whom I come and before whom I will ultimately stand?

Our Lord also says: “Whoever tries to save his life will lose it; and whoever loses it will preserve it.”[4]  C.S. Lewis puts it another way: “All [like the fictitious King Midas and like the real Abraham] get what they want.  They do not always like it.”[5]

I conclude with a beautiful prayer to Jesus from the hymn Be Thou My Vision.  Would that we could make this prayer our own!

Riches I heed not, nor man’s empty praise,
Thou mine Inheritance, now and always:
Thou and Thou only, first in my heart,
High King of Heaven, my Treasure Thou art.