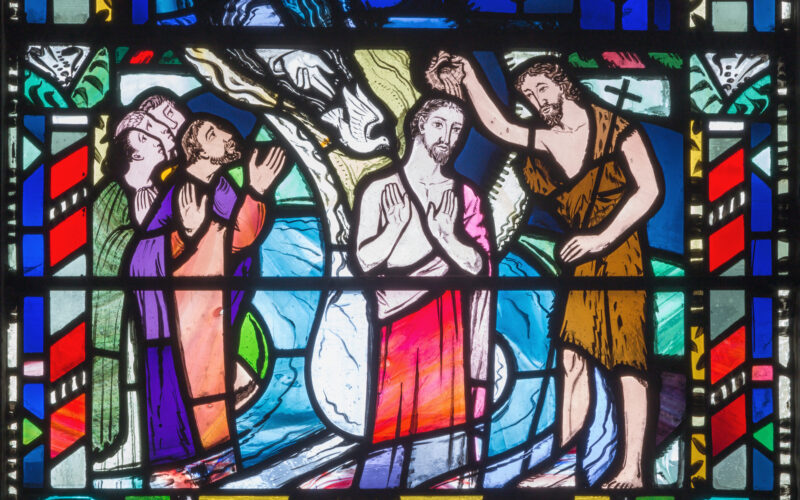 A Homily for the Feast of the Baptism of the Lord

[T]herefore, he had to become like his brothers in every way, that he might be a merciful and faithful high priest before God to expiate the sins of the people.  Because he himself was tested through what he suffered, he is able to help those who are being tested.

Some of you may remember Doctor Thomas Anthony Dooley, the Irish-American physician who, in the 1950s, gained increasing notoriety for his humanitarian relief efforts in Southeast Asia.  Doctor Dooley died of cancer in 1961, one day after his thirty-fourth birthday.  When I was growing up in the 1960s, he was held up as a hero for all Catholic school children.

There are flaws in all fallen human beings.  Doctor Dooley, of course, was no exception.  He was certainly no saint.  He was not immaculately conceived.  Among other blemishes on his character, he has been accused of being a showman and publicity hound who fabricated stories of Communist atrocities.  According to Wikipedia, however, “Despite his self-promotion, he ‘was indefatigable in taking care of his patients.’”  In addition, Dooley saw medicine as a great tool of diplomacy and means to world peace.  His three books—Deliver Us from Evil, The Edge of Tomorrow, and The Night They Burned the Mountain—make excellent, if not entirely factual, reading.  I believe they inspired many in my generation to enter the field of medicine.

Here are some excerpts from a very honest letter that Dr. Dooley wrote to his mother from Laos on July 3, 1957.  It is a private letter, but even here Dooley’s Irish flare for writing comes through loud and clear:

One of the most difficult things at home, it seems to me, is to understand the heads and hearts of people here, on the edge of tomorrow.  No matter how you try to point out to Americans that Asians cry and love, fear and hate, and react to the same stimuli in the same way we do, you still hear the comment, “Well, the Asiatics can take it.  They’ve always had poverty” or “The yellow hordes can take more pain than white men” or “They’re inscrutable, colder, calculating” or “You can’t trust a yellow man.”  And some comments get even worse….

Living in a village with them, being completely saturated with their lives, their religion, their aches and pains, their joys and simple happinesses, yet still being an Irish American at heart and in my reasoning, I am thrust in a peculiar position.  I have to explain some of the churlish world to my Asians, and then I will return, and I’m going to try to explain something of Nam Tha to America.

My people here are more dependent on people, on the immense and savage sky, on the monsoon rains, on their animals and fields.  They live closer to the edge of starvation, closer to their land, closer to their own.  They have many qualities it would behoove New Yorkers to adopt.  And strangely enough, aside from our technology, I am not so sure that Madison Avenue has any quality that would especially behoove Laos.  There is neither immense desolation nor overpowering happiness here.  The people walk on a slender, taught rope between the brutal earth and the rain-laden sky.  If not enough rain, next year famine.  If a nonproductive earth, next year famine.  This strand is across the canyon between love and cruelty—the love for their own across the frontier of China, their hatred for the cruelty they know exists there.

Even in their relations to me, their white witchdoctor, they have conflict.  They have been told again and again by the Communists, they have been flooded with leaflets depicting me as the American monster intent on experimentation, conquest, and ultimate slavery. Why, even the flu epidemic, which seems to be hitting all of us in Asia, has been called khi atomic, which means “atomic fever.”  Can they believe in me?  Can they allow me to open the belly of their pregnant daughter to bring a caesarean delivery?  Sometimes they trust me.  Frequently they don’t.  Many a patient on whom I have done a major surgical procedure is spirited away during the night because the sorcerer in his village has proclaimed the hospital to be haunted, the moon not full enough, and the sky savage.  It is hard for us to be tolerant.  We would prefer to be a despot for the right, to impose my will on the sick, as I know it is the will of enlightenment—at least in medical matters.[1]

Notice: Dr. Tom Dooley was able to help the people of Laos not by imposing his medical knowledge from on high, but by literally becoming saturated with the daily lives of the people.  That’s the very word he uses—“saturated” with their joys and sorrows, their hopes and dreams.  Dooley did this so thoroughly that—did you notice?—he actually began to refer to the villagers as “my Asians” and “My people.”  Dr. Tom Dooley was able to help countless individuals because he met them where they lived.  In the end, many of the people of Southeast Asia came to trust Tom Dooley, despite all the Communist propaganda.  It was a trust that Dr. Dooley earned.

Today is the Feast of the Baptism of the Lord.  The baptism administered by Saint John the Baptist was a baptism of repentance.  Why, then, did Jesus consent to be baptized?  He had nothing of which to repent.

I think one reason Jesus chose to be baptized is because, like Dr. Dooley, His aim is to bring us life, not by imposing it dictator-fashion from above, but by literally becoming immersed in day-to-day human existence, in our joys and pains, in our hopes and longings, in our dreams.  The Most Reverend Donald Joseph Hying, Bishop of Madison, Wisconsin, said it quite succinctly: “Love cannot love at a distance, and so He gets Himself into the human foray and allows himself to be misunderstood and then to be crucified…”[2]

The Feast of the Baptism of the Lord marks the end of the Christmas season because Christ’s baptism is a logical extension of His Incarnation, God becoming Man.  Jesus Christ is Emanuel, God with us.  He meets us where we live.  He does not promise to make our lives easy, but He does promise that He will never forsake us:  “And behold, I am with you always, until the end of the age.”[3]

Despite all that the world says to the contrary, despite all our misgivings, how can we not trust a God like that, a God who comes down to where we live and who will never abandon us?

[1] From my partial transcription made from the audiobook, Promises to Keep: The Life of Doctor Thomas A. Dooley, by Agnes W. Dooley.

[2] From the homily delivered at the Mass for the 175th anniversary of the Society of Saint Vincent de Paul, on Sunday, 26 January 2020, in the Basilica of the National Shrine of the Immaculate Conception, Washington, DC.