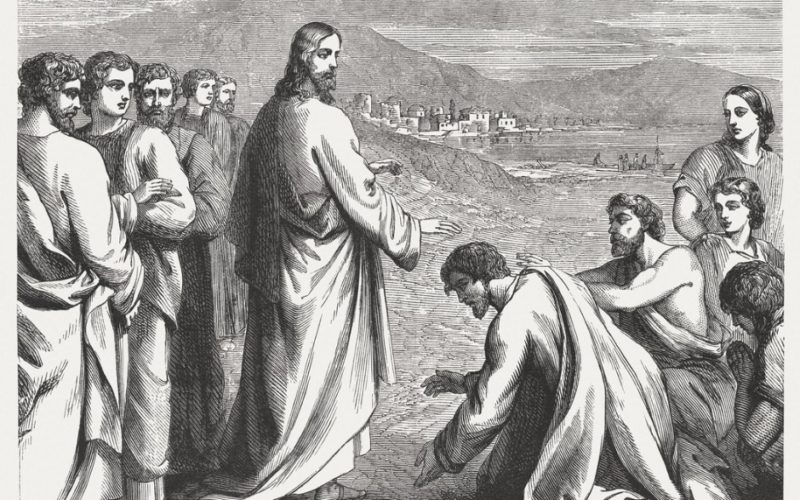 A Homily for the 23rd Sunday in Ordinary Time, Year B

And people brought to him [i.e. Jesus] a deaf man who had a speech impediment and begged him to lay his hand on him.  He took him off by himself away from the crowd.  He put his finger into the man’s ears and, spitting, touched his tongue; then he looked up to heaven and groaned, and said to him, “Ephphatha!”—that is, “Be opened!”—And immediately the man’s ears were opened, his speech impediment was removed, and he spoke plainly.

Being legally blind, I know next to nothing about deafness, a fact that became all the more apparent last week as I began to prepare for this homily.  For example, I found out that most deaf people do not read lips, that lip reading requires intense concentration, and that even the best lip readers, on average, can pick up only twenty-five to thirty percent of what is being said.  People who read lips have to rely on context and guesswork to fill in the blanks.

Aware of my profound ignorance, I appealed to my friend Joe Holst for insight.  I met Joe in 1987 when I was a deacon.  He has been deaf since age seven and is very good at reading lips.  I e-mailed Joe and asked him to comment on today’s Gospel.  Here’s what he wrote:

Thank you for turning to me for some help.  This Sunday’s Gospel reminds me of a Catholic pilgrimage to France which I made with some other deaf people seven years ago [i.e. in 2011].  I thoroughly enjoyed the pilgrimage; it did wonders for my faith.  One of the places we visited was the grotto at Lourdes.  While there, I took some of the holy water and touched it to my ears, not that I was expecting to be cured of my deafness, but because I had enough faith to believe that God would cure me if He willed.  But I asked God for His will to be done, rather than my will.  So, today I still carry the cross of my deafness, believing that God has a purpose for it which is known only to Him.

On another note, I still attend the interpreted Mass twice a month at Our Lady of Perpetual Help Church in Bethlehem [Pennsylvania].  On the other Sundays, I still bring my missal to Mass.  And I make up for what I miss from not hearing the homilies by reading the meditations in The Word among Us magazine and information I find on Catholic websites.

There you have it.  The most astonishing truth I learned from Joe is that he really values homilies in sign language.  Wow!  By contrast, many of us who are able to hear take preaching for granted.  Most of the time, I sleep through a homily, even if I myself happen to be giving it!  The other amazing fact about Joe’s commentary is his tremendous faith.  Instead of trying to manipulate God into fulfilling his merely human wants, Joe trusts Our Lord to do what is best.  If that isn’t faith, I don’t know what is.[1]  And isn’t faith in God the best gift of all?

It was my privilege to attend seminary with a man named Paul Klucsarits from Allentown, Pennsylvania.  For many years thereafter, he worked with the deaf before entering a Benedictine monastery.  On June 3, 2017, he was ordained Father Linus, O.S.B.  Here is what this monk has to say about our Gospel:

Well, I have had to preach this homily to a deaf congregation.  I stress that the important thing is not that the man became hearing.  Rather that he was opened to receiving God’s word.  It was as much a spiritual healing as a physical one.

Thus Joe Holst and Father Linus both agree that what’s really paramount here is openness to doing God’s will.  “Most people,” says the anonymous quotation, “want to serve God, but only in an advisory capacity.”  How unfortunate!  When it comes to God, our job is to submit rather than to direct.

Way back in the summer of 1982, while still trying to figure out what I was supposed to do in life, I myself made a trip to Lourdes.  I drank the water.  I went into the baths.  I was present for exposition of the Most Blessed Sacrament.  I took part in the candlelit rosary procession, and I participated in the international Mass in Latin.  Alas!  My eyesight didn’t get any better, and, what was worse, I couldn’t shake the conviction that I was called to be a priest.  Unlike Joe Holst, I left Lourdes with a sense of utter frustration.  My parting words to Mary were: “Speak to your Son!  I don’t want to be a priest!”  A year later I somewhat reluctantly entered seminary—and I’ve never regretted it.  Lesson?  It doesn’t pay to tell Mother what to do.  It’s not a good idea to give God advice.  The best we can do is to be open to doing His will.  As Joe Holst put it, “I asked God for His will to be done, rather than my will.”

And if you want to know the truth, I think Joe’s formula is the only way to authentic happiness.  Saint Augustine learned this truth at the end of the fourth century, a lesson it took him more than thirty years to grasp.  Speaking to God of his conversion, he prayed:

Late have I loved you, O Beauty ever ancient, ever new, late have I loved you!  You were within me, but I was outside, and it was there that I searched for you.  In my unloveliness I plunged into the lovely things which you created.  You were with me, but I was not with you.  Created things kept me from you; yet if they had not been in you they would not have been at all.  You called, you shouted, and you broke through my deafness.  You flashed, you shone, and you dispelled my blindness.  You breathed your fragrance on me; I drew in breath and now I pant for you.  I have tasted you, now I hunger and thirst for more.  You touched me, and I burned for your peace.[2]

[1] This idea comes from the book A Place of Healing: Wrestling with the Mysteries of Suffering, Pain, and God’s Sovereignty (Copyright 2010) by Joni Eareckson Tada.  The author is an evangelical Christian who, prior to her conversion, suffered a diving accident which left her a quadriplegic, paralyzed from the shoulders down.