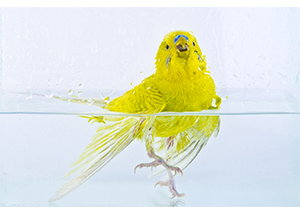 A Homily for those Preparing for Confession

If we acknowledge our sins, he is faithful and just and will forgive our sins and cleanse us from every wrongdoing.

On my bookshelf, there rests a little volume entitled God Never Panics by Nate Carter.  Here is the true story recorded on pages 81-82:

Chippie the Parakeet certainly had a bad day!  While resting peacefully in his golden wire cage, the unexpected happened….

The whole episode began when Chippie’s owner decided to clean the cage.  She [took out the vacuum cleaner,] carefully removed the vacuum head[, turned on the vacuum,] and stuck the hose into the cage.  This ambitious effort was suddenly interrupted by the ring of the telephone.  As she turned to answer the phone, she heard “ssopp!”  The vacuum had just swallowed Chippie the parakeet.

Chippie’s owner immediately dropped the phone, turned off the vacuum, and hurriedly opened the latch to free the bird from its dusty sarcophagus.  The alacritous effort of the owner prevailed.  There was Chippie—still alive, but dazed and dirty.

Since the bird was coated with dust and painted with soot, she raced him to the bathroom, turned on the faucet, and held Chippie under the frigid running water.  Then, realizing the shaken and shivering state of her pet, she did what any compassionate bird lover would do…she grabbed the hair dryer, took aim, and blasted him with hot air.

Chippie was never quite the same after this unexpected ordeal.  A reporter from the local newspaper called to inquire of Chippie’s condition.  The owner replied, “Well, Chippie doesn’t sing much anymnore—he just sits and stares.”

I ask you: which experience was more traumatic for Chippie, getting sucked up or getting cleaned up?  After being swallowed by a vacuum cleaner, the last thing Chippie needed was to undergo another trauma by being drenched in cold water and blasted with hot air.

Sin can often be a traumatic experience.  The last thing we priests want is to cause a penitent another trauma in the sacrament of confession.  I am sure I can speak for all the priests here when I say that, in getting you cleaned up, we promise to use the gentlest cleaning agent known to mankind, none other than the Blood of Christ Himself.  When you’re finished with confession, it’s our heartfelt aim that you’ll come out singing.