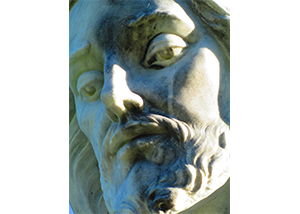 A Homily for the Fifth Sunday of Lent

There are tears in our affairs, and things mortal touch the mind.

In 1867, Mark Twain took a cruise with some fellow Americans to Europe and the Holy Land aboard a paddle steamship, the Quaker City.  The result was his travel narrative, The Innocents Abroad, which made its appearance in 1869, one of the very first books the promising young writer ever had published.  The account is filled with its author’s characteristic wit, sarcasm, and vituperation.  But every now and then, Twain gives us a passage of exceeding beauty, like a sapphire or ruby at the bottom of a vat of vinegar.  Consider this gem from Chapter 24:

Pisa is believed to be about three thousand years old.  It was one of the
twelve great cities of ancient Etruria, that commonwealth which has left
so many monuments in testimony of its extraordinary advancement, and so
little history of itself that is tangible and comprehensible.  A Pisan
antiquarian gave me an ancient tear-jug which he averred was full four
thousand years old.  It was found among the ruins of one of the oldest of
the Etruscan cities.  He said it came from a tomb, and was used by some
bereaved family in that remote age when even the Pyramids of Egypt were
young, Damascus a village, Abraham a prattling infant and ancient Troy
not yet [dreampt] of, to receive the tears wept for some lost idol of a
household.  It spoke to us in a language of its own; and with a pathos
more tender than any words might bring, its mute eloquence swept down the
long roll of the centuries with its tale of a vacant chair, a familiar
footstep missed from the threshold, a pleasant voice gone from the
chorus, a vanished form!–a tale which is always so new to us, so
startling, so terrible, so benumbing to the senses, and behold how
threadbare and old it is!  No shrewdly-worded history could have brought
the myths and shadows of that old dreamy age before us clothed with human
flesh and warmed with human sympathies so vividly as did this poor little
unsentient vessel of pottery.

What marvelous writing!  I can’t help thinking about what the psalmist says to God:

My wanderings you have noted;

are my tears not stored in your flask,

recorded in your book?[1]

If there is one thing we can say about tears, it’s that they are a universal human phenomenon.  One might almost say that to be human is to cry.  There are, however, two other observations I can make about tears.

In the face of grief, tears are a necessary coping mechanism that promotes healing.  For more than twenty-five years now I have kept a written article entitled “Tears” by someone named Eunice Brown.  I know nothing about the author or from whence the article came.  Eunice writes:

In the spring of 1986, I attended a grief workshop given by Dr. Terrance O’Brien.  He said, “Tears are not a luxury, they’re a necessity.”  During the last few days of our son’s life and his long struggle against cancer, I found myself sobbing uncontrollably outside his hospital room.  I know now that it was important for me to do this.  It was necessary….

When we returned home after our son’s funeral, I was shocked by the expression on our oldest daughter’s face when she met us at the airport.  It was a look of sheer pain, and after we had talked I realized she had not cried.  Once she broke down and cried, the expression was gone!  She released some of the grief in her tears.

I remember seeing a television show about children suffering with cancer.  One teenager said people had told her that her doctor would go back to his office and cry after seeing her suffering.  She said, “If only he had been able to cry with me, it would have meant so much more.”

“Tears are not a luxury, they’re a necessity.”  When we watched the Kennedy family…after the assassination of our 35th president, many people marveled at how strong they all were.  All those hours of televised coverage and “nary” a tear did we see, through any of their tragedy.  For me, that was not real.  I cried when our president was shot and killed, along with millions of others.  If the family had shown their true emotions, what a help that would have been to so many who would grieve and want to cry, but couldn’t because they must be strong like the Kennedys.

So writes the mysterious and wise Eunice Brown.

Tears are a universal human phenomenon.  Tears are a necessary mechanism for dealing with grief.  Finally, tears are pure.  I recall reading, when I was in college, an article by British social anthropologist Sir Edmund Leach (d. 1989) in which he argued that “dirt” is matter out of place.  In a footnote he observed that tears are the only substance which the human body produces, secretes, or excretes that, once gone from the body, is still considered pure.  This is true, said Leach, for all human cultures at all times and in all places.  Think of it.  If someone you loved had a runny nose, you would never consider using your index finger to wipe away the discharge, but if someone you loved were crying, you would think nothing of brushing away a tear with a gentle touch.

Tears are a universal phenomenon.  They are a necessary coping mechanism for handling grief.  They are always pure.

In our Gospel today, we find the shortest verse in the entire Bible, viz. John 11:35:

Three little words:  And Jesus wept.  I don’t know about you, but Our Lord’s tears almost make me want to jump for joy!