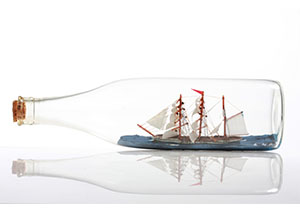 For he [i.e. Christ] assumed at his first coming the lowliness of human flesh, and so fulfilled the design you formed long ago, and opened for us the way to eternal salvation….

–Preface I of Advent–

Have you ever wondered how craftsmen are able to put model ships inside glass bottles?  Just the other day, I went online and did a little investigating.  The process apparently requires a lot of time and planning.  First, the hull of the model ship must be constructed so that it is small enough to fit through the neck of the bottle.  It is fitted out with masts, spars, and sails—all hinged so that they lie flat against it.  The hull is then carefully inserted into the bottle.  Finally, by means of strings and hooks, the masts and spars are erected and the sills unfurled so that the ship assumes its proper appearance.  What was once an empty bottle fit for the garbage heap is now a work of art, worthy to be mounted on a mantelpiece and displayed with pride.

Believe it or not, mes amis, this all makes me think of the Incarnation–Christ’s coming in the flesh to redeem the human race.  Why?  First, just as putting a model ship inside a bottle requires lots of planning, so the Word made flesh was not a last-minute idea on the part of the Father.  The Incarnation was the fruition of a plan that began from the very foundation of the world.  Saint Paul tells us in Galatians 4:4 that “in the fullness of time, God sent his Son.”  Second, just as the hull of the model ship must be small enough, with all its masts, spars, and sails, to pass through the neck of the bottle, so Christ had to humble Himself in order to enter into the human race.  He appeared on earth, not as a mighty king and conqueror, but as a poor babe born in Bethlehem.  Finally, just as a model ship inside a bottle elevates the very status of the bottle, redeeming it from the garbage heap and transforming it into a work of art, thereby making it fit to occupy a privileged place on a mantle or shelf, Jesus, now that He has entered the human race, has redeemed humanity from the corruption of sin, transforming all who follow Him into new creations, thereby making us fit to occupy heaven.

To sum up, putting a model ship inside a bottle: (1) requires planning, (2) means that the hull of the ship must be small enough to enter through the neck of the bottle, and (3) transforms the bottle itself into a work of art.  Similarly, Christ’s Incarnation, His enfleshment in the human race: (1) was no last-minute thought on the part of the Father, (2) meant that Jesus Himself had to become incredibly humble, and (3) transforms all who follow Jesus into magnificent works of art.

Here are some questions I need to ask myself:  Do I take time to prepare for the proper reception of Confession and Holy Communion?  Does my heart provide even the smallest opening through which the grace of Christ can slip inside?  Once I have received Jesus into my heart, will I allow Him to transform me into a work of art fit for heaven?

By the way, when a craftsman has finished putting a model ship inside a bottle, what does he do?  He inserts a cork or stopper into the mouth of the bottle.   Now that I have finished this reflection, it is time for me to put a stopper in my mouth.