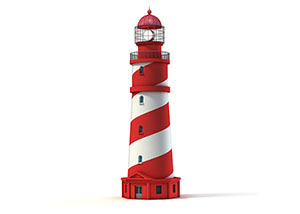 Dick, I know this Gospel was chosen because of your experience in the construction business, but, as hard as I try, it seems I can’t get away from thinking in terms of nautical imagery.  So you won’t be surprised when I tell you that a good marriage is, in point of fact, very much like a lighthouse.  Why is marriage like a lighthouse?  I‘ll give you three reasons.

First, every lighthouse must be built upon solid rock.  A lighthouse is not simply set on the rocks.  Its foundation is actually cut into the rock.  Likewise, a good marriage, as we can infer from today’s Gospel, is founded upon the rock of obedience to the Word of God.  Obedience means acting on Our Lord’s teachings as well as simply hearing them.  It’s not enough to be a good listener.  Actions speak louder than words.  Without obedience to divine precepts, any human endeavor will crumble.

Here’s a second reason why marriage is like a lighthouse:  A good lighthouse must be made of pretty sturdy stuff.  It must be able to endure the blasts of wind and sea.  Maybe you’ve seen pictures of a lighthouse in the midst of a storm.  Sometimes the whole structure is engulfed in a huge wave except for the very pinnacle.  Similarly, anyone who marries must be made of stern stuff if the marriage is to endure.  In our Gospel, the winds and storms are not hypothetical occurrences.  Jesus does not say, “If it should happen that the rain falls or the floods come or the winds blow…”  No!  He simply says, “The rain fell, the floods came, and the winds blew…”  In the same way, just as a lighthouse cannot hope to escape storms, so no married couple worth their sea salt can hope to escape difficulties.  As Shakespeare puts it, “The course of true love never did run smooth.”[1]  But the couple who relies on Christ can weather any storm.  Saint Paul says, “I can do all things in him [i.e. Christ] who strengthens me.”[2]  The greatest strength a couple can exhibit is the ability to forgive one another for not measuring up to each other’s expectations.[3]

A third reason why marriage is like a lighthouse:  A lighthouse is a combination of two very different things, but their union results in a reality far greater than the sum of the parts.  When you get right down to it, a lighthouse is simply a tower and a beacon.  What two things could be more dissimilar?  A tower all by itself would accomplish little by way of saving ships.  A beacon on the ground would be next to useless.  But put them together, and they are an awesome combination.  In like manner, marriage is the union of two opposite entities that could do very little all by themselves, but, when combined, prove to be an awesome combination.  A good marriage, to use other images of Our Lord, is like “the light of the world” or “a city set on a hill.”[4]  It proclaims to a fickle world the firmness of fidelity.  It proclaims to a pessimistic world the possibility of permanence.  It proclaims to a barren world the blessing of babies.

So congratulations, Dick and Anna Marie!  For fifty years, the lighthouse of your marriage has stood firm.  Why?  Because your foundation is none other than the Rock of Christ Himself, because you are made of sturdy stuff, and because, when all is said and done, you are an awesome combination.  Shine on, Anna Marie and Richard Culver!  The world needs your witness.  Shine on!

Please stand, everyone, and salute the Admiral and his First Mate.

[3] Observation from Father Ronald Rolheiser in his book Holy Longing.