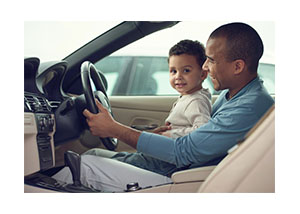 Help Me, My daughter, to save souls.  Join your sufferings to My Passion and offer them to the Heavenly Father for sinners.

This request did not spring from the lips of an eager adolescent with a newly acquired driver’s license.  On the contrary, it came from my brother John when he was but five years old.  We were in the family Chrysler on our way home from a visit to Grandma.  Dad was behind the wheel, Mom in the passenger seat, John in between them, and the rest of us kids piled in the back seat.

With a glance in Mom’s direction, Dad pulled the car onto the side of the road.  Placing John on his lap—there were no seat belt laws in the 1960s—and encouraging my brother to take hold of the steering wheel as best he could, Dad got the car back onto the road.  Off we went.  John grinned from ear to ear, delighted in the conviction that he would be the one who would be driving us home.

My father had, of course, not completely relinquished the steering to John.  His own skilled, surgeon’s hands still firmly gripped the wheel, and he was in control.  Yet I would argue that at least some of my brother’s energy went into driving the car.  Was Dad incapable of steering on his own?  Not at all!  Was he compelled to share the driving with John?  Certainly not!  It was Dad’s love and generosity that allowed my brother to participate in steering the family car.  Here, mes amis, we have a perfect analogy of what the Catholic Church refers to as redemptive suffering.

In his letter to the Colossians, Saint Paul writes these enigmatic words:

I rejoice now in the sufferings I bear for your sake; and what is lacking of the sufferings of Christ I fill up in my flesh for his body, which is the Church.[1]

What is the Apostle trying to tell us?  Pope John Paul II provides an explanation in his 1984 apostolic letter On the Christian Meaning of Human Suffering, otherwise known by its Latin title, Salvifici doloris:

….The sufferings of Christ created the good of the world’s redemption.  This good in itself is inexhaustible and infinite.  No man can add anything to it.  But at the same time, in the mystery of the Church as his Body, Christ has in a sense opened his own redemptive suffering to all human suffering.  In so far as man becomes a sharer in Christ’s sufferings—in any part of the world and at any time in history—to that extent he in his own way completes the suffering through which Christ accomplished the Redemption of the world.

What is the point of this lengthy quotation?  The Holy Father is, in essence, saying that, when it comes to saving souls, Jesus Christ is very much like my father, and those who suffer are undoubtedly like my brother John.

In other words, whenever we suffer and offer our sufferings to Christ for the salvation of souls, we are like my brother asking to drive the family car.  It is as if we say to Jesus, “Lord, can I save sinners?”  Then, just as my father made room for John behind the wheel, so Christ, as it were, moves over and makes room for us to hang beside Him on the Cross.  Just as some of my brother’s energy went to steering the family car, so our sufferings, in union with those of Jesus, go to saving sinners.  Is Our Lord incapable of saving sinners on His own?  Not at all!  Is He compelled to share His work of redemption with us?  Certainly not!  It is Jesus’ love and generosity that allow us to participate in redeeming the world.  How awesome is that?

If you want a modern instance of this kind of redemptive suffering, have I got a story for you!

Joseph Michael Peek was born on August 9, 1965, one of eleven children.  He eventually served in the United States Navy as a helicopter air crewman and rescue swimmer.  Aspiring to become a naval chaplain, he entered seminary and was co-sponsored in his preparation for the priesthood by the U.S. Archdiocese for the Military Services and the Archdiocese of Atlanta.

Then one day early in 2002, Joe, who was known for his physical endurance and strength, couldn’t reach the top of a hill during his daily run at seminary.  Something was clearly wrong.

On February 14, 2002, just as the Boston Globe was breaking with the first priest scandal, Joe, months shy of ordination, received his diagnosis of chronic myelogenous leukemia.  He called it his valentine from the Sacred Heart of Jesus and from that moment offered every stitch of suffering for his fellow priests in the Archdiocese of Atlanta, Georgia.  “Since day one,” he later confessed to his sister, “I have offered my sufferings for priests.”  To this mission he was unflinchingly faithful, never once heard to complain.  To the great majority, it was a secret mission, a covert operation.

Despite his diagnosis, Joe completed his studies and was ordained to the priesthood by Archbishop John F. Donoghue on June 22, 2002.

In October 2003, Father Joe received a bone marrow transplant from his sister Kathleen, and while doctors believed the transplant effectively cured him of the cancer, the procedure created a new series of life-threatening health concerns.

Unfortunately, Father Joe’s new immune system began attacking his body, a condition known as graft-versus-host disease.  The illness ravaged the priest’s organs, one by one, ultimately affecting his flesh, beginning with massive raw wounds on his back.  Over time, the wounds extended from his face and neck even to the soles of his feet.  Open sores covered more than 70% of Father Joe’s body.  The bandages on his wounds had to be changed three times a week, and even then several times he contracted MRSA.  In 2008, he became septic and almost died.

In spite of his life-threatening illness, Father Joe asked for and received parish assignments.  However, his parish work became only a small part of his priestly ministry.  Father Joe believed that as a priest he needed to be a visible presence of Christ to others.  More importantly, he believed his experience as a patient put him in a special category of priests, and he felt a need to minister to fellow patients at Emory University’s Winship Cancer Institute and others within Atlanta’s Catholic community.  Father Joe became the spiritual advisor to the sickest of the sick.  He also maintained a large online ministry.

In 2012, Father Joe developed squamous cell carcinoma, which turned several of his wounds into growing lesions.  He had a few procedures to remove the injured tissue, but eventually, the lesions spread to his lymph nodes.  He was told by his doctors in December 2014 that there was nothing more they could do.

On August 30, 2015, Father Joe’s nurse sister wrote this about her suffering brother:  “His hollowed eyes say so much.  Hidden beneath the gratitude and love, one can see the suffering and the surrender.  He has been such a valiant suffering soul.  Wound care three times a week for the past years has taken its toll.  He is a suffering Christ.  The circular wound on the crown of his head—once all scabby—now has a crater about one inch in diameter.  Having gone through the pain of radiation and the resulting blisters, his lower lip is disappearing more and more to the point that only half the lip remains….  His breathing has become more and more difficult….  The wounds on his back are multiplying as though he were scourged….  The wound on his left side is bigger than my hand.”

On March 14, 2016, Father Joe, surrounded by the songs and prayers of his parents and siblings, drew his last breath, completed his life on earth, and began his eternal life with Christ.

The Mass of Christian Burial for Father Joseph Michael Peek was celebrated with three Bishops and 111 priests on March 18, 2016.  3,000 of the faithful were in attendance.  “He was a priest’s priest,” said Father Joe’s younger brother, Father Kevin, as he revealed to all in his funeral homily the offering Father Joe had made fourteen years earlier.  “At one point while nursing Jim and seeing him writhe with pain, I apologized for all the suffering my sins were causing him as a priest of the Archdiocese.  He grunted and said, ‘I am a priest of the Archdiocese, too!’”  The funeral ended with the priests singing the Salve Regina as they blessed Father Joe’s casket with holy water.

This good priest, like a grain of wheat, was laid to rest in a military cemetery in Canton, Georgia, on March 21, 2016, the first day of spring.  Father Joe’s father, a former Navy Lieutenant, played taps.  His sister Kathleen, Lieutenant Commander in the Reserves, read his years in service, while his mother received the flag.  His tombstone reads: “Navy Reserves Lieutenant, Roman Catholic Priest of God,” along with his grunt call in Latin: De Caelum Eis (“Giv’em Heaven”).[3]

After Father Peek’s redemptive sacrifice, I expect great things of the priests of the Archdiocese of Atlanta!

Most of us, I am sure, will not be called to suffer as Father Joe did, but can’t we at least offer Christ some of our unavoidable suffering for the salvation of souls?  Instead of throwing a hissy fit whenever life doesn’t go our way, we can give the pain and frustration to Jesus to unlock heaven for sinners.  That’s why our good Catholic parents were always telling us to “offer it up.”  That’s why Bishop Fulton Sheen lamented that so much suffering in hospitals and nursing homes was going to waste—because it was not being given to Christ in order to help save souls.

Just think.  If we offer our suffering to Christ and someone happens to ask us how we are doing, we can, imagining ourselves right next to Jesus on the cross, respond in all honesty, “I’m hanging in there.”

My brother John delighted in the certainty that he helped to drive his family home.  Likewise, when we suffer in union with Christ, we find peace and even joy in the assurance that we too are helping to bring souls home to God.

[3] This account was pieced together from material provided by Father Joe’s older sister, Sister Mary Agnes of the Immaculate Heart of Mary, a cloistered Carmelite nun living in Erie, Pennsylvania.