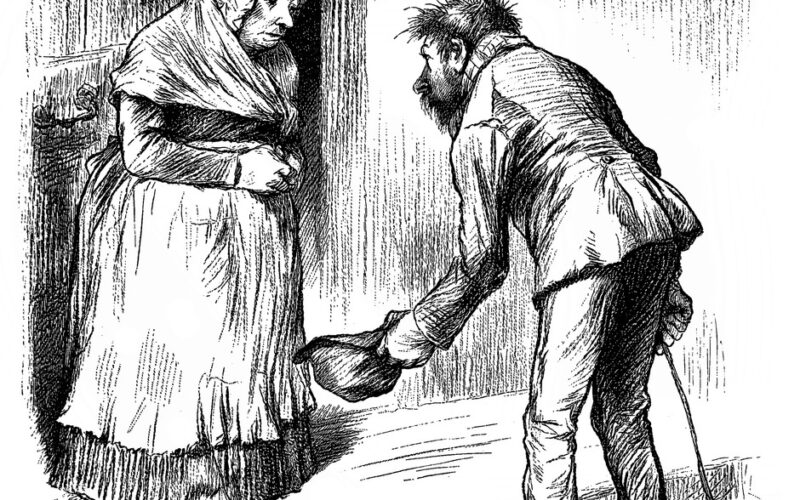 Whoever is kind to the poor lends to the LORD, and he will reward them for what they have done.

Jesus answered, “If you want to be perfect, go, sell your possessions and give to the poor, and you will have treasure in heaven. Then come, follow me.”

Once, while I was stationed at the Cathedral in Allentown, a fellow who looked about in his mid-40s came to the rectory in search of a monetary handout.  As he sat in my office, he tried to pull on my heartstrings by pointing out his collection of numerous scars.  He lifted up the bottom of his shirt to show me the indications of a surgical incision.  Then he raised his pant leg to reveal the telltale evidence of another wound.  Finally, he rolled up his sleeve to uncover a third badge of honor.  It was just like a scene right out of the 1975 movie “Jaws.”  I thought at any moment the guy would break into a chorus of “Show Me the Way to Go Home”!

I had had enough, and so I said, “See if you can beat this.”  Thereupon I took out my prosthetic eye and plunked it down onto the desk.  My visitor was reduced to silence.

“I don’t get it,” I said.  “You look like a relatively able-bodied man, and yet you’re coming here for a handout.  I don’t get it.  I believe God is calling you to better things.  I’ll tell you what I’m going to do.  Tomorrow morning at 9 o’clock, I’m having breakfast with my savvy friend Joe at the Hamilton Family Diner.  If you show up, I’ll buy you breakfast, and I am almost certain Joe will be able to find you a job.”

The man left my office…, and I never saw him again.  Here, I think, was a fellow who enjoyed being a victim rather than a victor.

The Bible says we’re supposed to help the poor.  I get it, but how do we help?  By way of answer, I want to give you a passage from a wonderful book first published in 1948.  It’s by Dale Carnegie.   Many people have heard of Carnegie’s famous book, How to Win Friends and Influence People.  The gem from which I am about to quote is less well known and is entitled How to Stop Worrying and Start Living.  What a fantastic book!  It is one of my all-time favorites.  Here is what we find in Chapter 13:

[I]n the highly emotional days of the First World War[, a] rumor had spread through central Mississippi that the Germans were arousing the blacks and inciting them to rebellion….  A group of white men—pausing outside the church [of a certain black preacher and teacher, Laurence Jones]—had heard shouting to his congregation: “Life is a battle in which every black must gird on his armor and fight to survive and succeed.”

“Fight!”  “Armor!”  Enough!  Galloping off into the night, these excited young men recruited a mob, returned to the church, put a rope around the preacher, dragged him for a mile up the road, stood him on a heap of kindling, lighted matches, and were ready to hang him and burn him at the same time, when someone shouted, “Let’s make the blankety-blank-blank talk before he burns.  Speech!  Speech!”  Laurence Jones, standing on the kindling, spoke with a rope around his neck, spoke for his life and his cause.  He had been graduated from the University of Iowa in 1907.  His sterling character, his scholarship, and his musical ability had made him popular with both the students and the faculty.  Upon graduation, he had turned down the offer of a hotel man to set him up in business, and had turned down the offer of a wealthy man to finance his musical education.  Why?  Because he was on fire with a vision.  Reading the story of Booker T. Washington’s life, he had been inspired to devote his own life to educating the poverty-stricken, illiterate members of his race.  So he went to the most backward belt he could find in the South—a spot twenty-five miles south of Jackson, Mississippi.  Pawning his watch for $1.65, he started his school in the open woods with a stump for a desk.  Laurence Jones told these angry men who were waiting to lynch him of the struggle he had had to educate these unschooled boys and girls and to train them to be good farmers, mechanics, cooks, housekeepers.  He told of the white men who had helped him in his struggle to establish Piney Woods Country School—white men who had given him land, lumber, and pigs, cows and money, to help him carry on his educational work….

As Laurence Jones talked with sincere and moving eloquence, as he pleaded, not for himself, but his cause, the mob began to soften.  Finally, an old Confederate veteran in the crowd said: “I believe this boy is telling the truth.  I know the white men whose names he has mentioned.  He is doing a fine work.  We have made a mistake.  We ought to help him instead of hang him.”  The Confederate veteran passed his hat through the crowd and raised a gift of fifty-two dollars and forty cents from the very men who had gathered there to hang the founder of the Piney Woods Country School—the man who said: “I have no time to quarrel, no time for regrets, and no man can force me to stoop low enough to hate him.”

There you have it.  Why was a lynch mob persuaded to help the very man they were planning to murder?  The answer is simple.  While nobody wants to help a whiner, many are more than eager to invest in individuals who are willing to help themselves.

In his book How Children Succeed, journalist Paul Tough, drawing on some fascinating psychological research and the real-life experiences of some remarkable individuals, argues that the number one predictor of success is not intelligence, race, or income, but character—optimism, grit, perseverance, and the determination to learn from mistakes.  In other words, believing you’re a perpetual victim isn’t going to get you anywhere.

…I think one of the worst things you can do, especially to a young person, is to convince them that they’re some kind of victim and that the world is against them and that they’re oppressed, especially if that’s not actually true, because I believe that whatever lens you view the world through is going to be your reality.  If you walk around thinking that the whole society, the [or] nation is very, very racist, very, very sexist, and very, very bigoted, you’ll start to see those things even where they don’t exist….  I’ve had people get mad at me for telling them that I’m not oppressed, which to me is the most bizarre thing.  I’ve literally been in arguments with people where they’re trying to convince me that I’m oppressed.  I’m like, “No.  I’m good.  Like I’m very, very privileged.”[1]

It seems to me that if we really want to help the poor, we must assist them in whatever way we can but at the same time insist that they are not victims, that they are capable of succeeding.  In point of fact, nobody wants to help a whiner, but many are eager to invest in those who are willing to help themselves.

If you are interested in bettering the lives of others, donate to your parish’s Society of Saint Vincent de Paul.  I attend some of its meetings in my own parish, and I can attest that its members are very good at vetting the people they help.  They don’t like throwing money down hopeless black holes, but they will reach out to people who are willing to help themselves.

Our mission is to assist homeless families with children who want to help themselves regain affordable housing and financial stability.  The mission is carried out by an inter-faith network of congregations that provide short-term housing and food to meet the basic hierarchy of needs of daily living for children and their parents.  We also provide case management services to assist these families in building lifestyle patterns that will promote self-reliance and long-term independence.

Family Promise is an awesome organization.  On a national level, it enjoys an 82% success rate in helping impoverished families get back on their feet.  Here in our own diocese, the two parishes which actually provide temporary shelter for these families are Notre Dame of Bethlehem Church (Bethlehem, PA) and Saint Joseph the Worker Church (Orefield, PA).  You can find out more about Family Promise of Lehigh Valley by going to their website: FPLehighValley.org or by calling 484-809-4108.

So contact the good folks at your parish’s Saint Vincent de Paul Society or the fine people at Family Promise of Lehigh Valley.  I can say with certainty that they’ll be keeping an eye out for you!