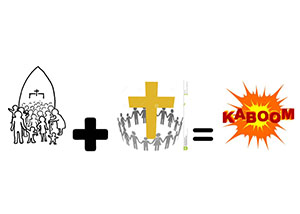 “I pray not only for them, but also for those who will believe in me through their word, so that they may all be one, as you, Father, are in me and I in you, that they also may be in us, that the world may believe that you sent me.

Now I beseech you, brethren, by the name of our Lord Jesus Christ, that you all say the same thing; and that there be no dissensions among you, but that you be perfectly united in one mind and in one judgment.

Aesop is reputed to have said, “In union there is strength.”  How true!

Consider the amazing bombardier beetle.  This little bug defends itself by mixing two innocuous chemicals.  Kept separate within the insect’s body, the two chemicals are inert, but when combined, they create a surprisingly powerful explosion which allows the creature to emit a well-aimed stream of hot, corrosive liquid in the direction of a potential predator.  Swiss engineers have been so impressed by the bombardier beetle that they’ve actually invented an anti-theft device that mimics the insect’s defense mechanism.  The idea is that a thief or burglar would unknowingly break a brittle barrier, two previously separated chemicals would combine, and the results for the robber would be most unpleasant.  Burglars and thieves beware!  Think twice about breaking into a home or an ATM![1]

Chemistry has given us more sinister deadly duos, and these form the basis of what are known as binary chemical weapons.  A binary chemical weapon, as the name suggests, consists of two different chemical components.  As long as the components remain separate, they are relatively harmless, but when mixed together, they prove to be quite deadly.

Jesus wants His followers to be united in truth and love.  Why?  In the battle against evil in the world, the various Christian denominations are very much like the two chemicals within the body of the bombardier beetle, like the two components of a binary chemical weapon.  As long as we followers of Christ remain divided, we will be relatively ineffective in combatting the forces of Satan in the world.  From the devil’s point of view, quarrelling, name-calling Christians might actually prove rather useful.  It is no coincidence that the words “devil” and “divide” have the same linguistic root.  Whereas God takes joy in the multiplication of the human race, the devil delights in division.  Yet when the day comes that we Christians are truly united in Jesus, then will the Church show Satan a thing or two, and the power of evil will begin to wane.

A united Church would pose a tremendous threat to the Evil One.  True, we Christians cannot ignore our differences.  Nor does it help to pretend that they are not there.  Finally, we don’t do each other any favors by telling ourselves that it does not matter what we believe as long as we are sincere.  There are, however, two steps we can take.  First, we can work together with other Christians as far as possible.  Feeding the hungry and engaging in Pro-Life activities, for example, are wonderful endeavors.  I like to say that empty stomachs and unborn children are ecumenical.  They are not at all picky about who helps them.

Above all, we can pray for our fellow Christians and, whenever possible, pray with them.  In her book Don’t Wrestle, Just Nestle, Dutch author Corrie ten Boom[2] said it best, “The devil smiles when we make plans.  He laughs when we get too busy.  But he trembles when we pray—especially when we pray together.”  [My emphasis.]  A unified Church will be impregnable, “and the gates of the netherworld shall not prevail against it.”[3]

In union there is strength.  When it comes to beetles, bombs, and believers, there is also power!

Lord Jesus Christ, at your Last Supper you prayed to the Father that all should be one.  Send your Holy Spirit upon all who bear your name and seek to serve you.  Strengthen our faith in you, and lead us to love one another in humility.  May we who have been reborn in one baptism be united in one faith under one Shepherd.  Amen.[4]

[1] Douglas Main, “Burglars Beware: New Material Steams, Foams upon Break-In / The Material Was Inspired by Bombardier Beetles,” posted on the Popular Science blog on 03.25.2014 at 9:00 am.

[2] Corrie ten Boom is perhaps best known for her wonderful book The Hiding Place, in which she relates how she and her family worked too save Jews from the Nazis during World War II.