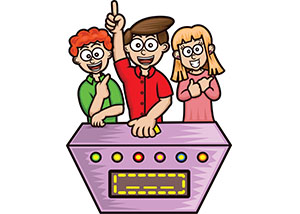 Teach us to number our days aright, that we may gain wisdom of heart.

I grew up during the era of television game shows.  To Tell the Truth, Password, Let’s Make a Deal, Queen for a Day, Concentration, Truth or Consequences, The Match Game, I’ve Got a Secret, What’s My Line?—all these TV programs formed a backdrop to my childhood.

And how could I forget Supermarket Sweep?  Here contestants were taken to a supermarket and given empty shopping carts.  They were allowed only a very few minutes to run through the store and fill their carts with whatever they wanted.  Now you can bet that when the contestants were let loose in the supermarket, none of them headed for the junk food aisle.  Most of them went straight for the meat and the more expensive food items.  Who could blame them?  The time limit gave the contestants a sense of urgency, and this sense of urgency forced them to prioritize.  They went for what they deemed most important.

In John 21:15ff, Jesus gives Saint Peter his mission statement as the first Pope.  He tells Peter to: “Feed my lambs. Tend my sheep.  Feed my sheep.”  Then Our Lord follows up this threefold imperative with a very frank description of how Saint Peter will die.  Why?  I believe Jesus wants to remind Peter that life on earth is limited.  This awareness will give Peter a sense of urgency, and this sense of urgency, in turn, will force Peter to prioritize, to focus on what is most important.  Our Lord is telling Saint Peter: You don’t have all the time in the world.  Don’t waste your life.  Put first things first.

What Jesus is saying to Peter, He is also saying to us:  Be filled with a sense of urgency, because you don’t have all the time in the world.  Prioritize.  Put first things first.  Make God your number one concern.

We do not have unlimited time in which to fill the shopping carts of our souls.  We ought to feel a sense of great urgency.  We need to prioritize and put first things first.  Let’s avoid the junk and head for the meat.  Let’s not waste our lives.