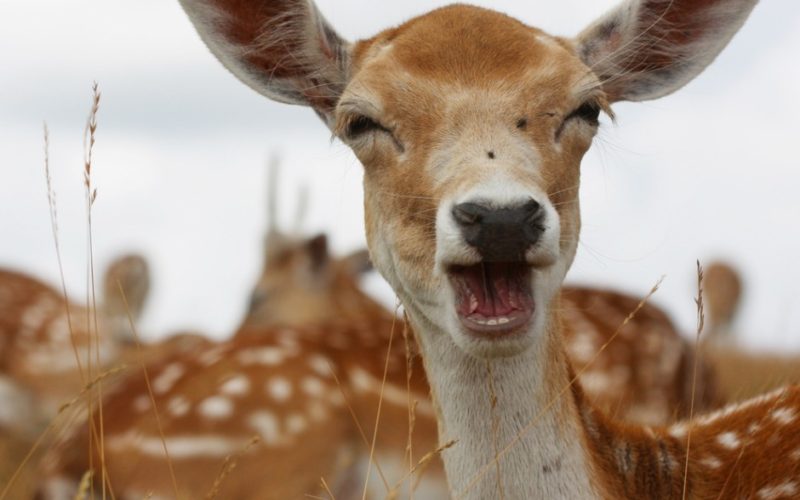 A Homily for the 29th Sunday in Ordinary time, Year A

This past Monday night, as I was coming back to my rectory from a Forty Hours celebration at Saint Theresa’s Church in Hellertown, the young man who happened to be driving me slowed his car and then came to a complete stop right on Nulton Avenue not far from the front door of the rectory.  There, revealed in the headlights, only a few feet in front of us, was a deer that appeared to be taking her good old time in crossing the road.  You know, of course, the deer had to be pretty close because even I saw it!

My deer-hunting friend Mike Grasso informs me that, because they are without their natural enemies, there are more deer now in the Commonwealth of Pennsylvania than there were in the 17th century, when Europeans first began to settle this area.  Also, I recently heard on the radio that, in this year of 2017, the likelihood of a motorist in Pennsylvania hitting a deer is one in sixty-seven.  That’s up from last year when the probability of a motor vehicle colliding with a deer was one in sixty-nine.  I would venture to say that most of us here either have had or know someone who has had an auto accident involving one of these four-footed friends of Lyme disease.  Don’t worry.  I’m not going to ask for a show of hands.  I wouldn’t see them anyway!

Speaking of the radio and deer, perhaps you’ve heard the funny audio clip from a Fargo, North Dakota, radio station that has been flying around the internet here of late.  The hosts on a call-in radio show received a very unusual request.  Here is a partial transcript:

Host:  Now, Donna, you got quite an event today it sounds like.  What’s going on with you?

Donna:  Well, I wanted to voice my opinion on something that’s been bothering me for a really long time.

Donna:  I tried writing the newspaper and contacting TV stations, but nobody seems to want to stay with this.  So that’s why I’m calling you guys.

Donna:  Okay, over the past few years, I’ve been involved in three separate car accidents involving deer.  Each of these incidents occurred shortly after I saw a deer-crossing sign on the highway.  Well, my frustration is that the Minnesota and North Dakota departments of transportation would allow these deer crossings to be in such high-traffic areas.  I mean I’ve even seen them on the interstate.  Why are we encouraging deer to cross at the interstate?  I don’t get it.  That’s a high-traffic area.

Host:  Are you kidding?

Donna:  It’s so irresponsible of us to allow these deer crossings to be in areas where these deer are so likely to be struck by on-coming traffic.  Now wouldn’t you agree?

Donna:  I mean you’d think they would put deer crossings maybe in smaller towns, maybe like at a school crossing.  It would be a safer place for them to cross.

Host:  You know deer crossings aren’t telling deer that it’s safe there.  It’s just more of like an alert for drivers so they know it’s a high deer population.

Donna:  The government put the deer crossings there.  They can direct the deer population anywhere they want to by moving that deer-crossing sign.  Why in the world would they place it on the highway…or the interstate?

Host:  Right.  You seem to be under the misunderstanding that the deer are somehow attracted to the deer-crossing sign.

Donna:  Well, well yeah!  The deer-crossing sign is there to allow the deer…you know that’s where they need to cross.

Host:  So you’d like to see these signs moved somewhere safer?

Donna:  Right!  Don’t put deer crossings on the interstate or freeways.  Put them in lower-traffic areas, somewhere where the speed limit’s a lot slower.

Host:  Um.  You say you’ve tried to contact quite a few people about this.

Donna:  Right!  I wrote like at least three or four letters.

Host:  We will spread the word, okay?  We will try to help you raise some awareness for this issue, okay?

Donna:  Ah, thank you!  We need to move those deer-crossing signs.

Donna:  All right.  Thanks!

But instead of laughing at Donna, maybe we ought to feel sorry for her.  Perhaps we ought even to sympathize with her.  Haven’t we all said or done stupid things about which we are ashamed or embarrassed?  The answer, of course, is an unequivocal Yes.

In our Gospel today, we have one of the most well-known sayings of Jesus:  Then repay to Caesar what belongs to Caesar and to God what belongs to God.[1]  If this imperative means anything at all, at the very least it means that we ought to give God first place in our lives.  We ought to regard Him as the First Cause.  Every time we sin, every time we disobey God’s will, we give secondary things first place.  In other words, we place the effects before the cause.  Thus we are, in a certain sense, guilty of the same corrupt reasoning as Donna.

How do you like that?  When you get right down to it, sin is just plain stupid.  We’ve all heard the expression, “as ugly as sin.”  I think we ought to change it to, “as stupid as sin.”  In his book, Theology for Beginners, Frank J. Sheed makes precisely this point.  In Chapter VII, he writes:

Sin…is an effort to gain something against the will of God; but the will of God is all that holds us in existence; when we sin, we are hacking away at our only support!  What could be more idiotic?  The realization may not prevent us from sinning, but it ensures that we shall feel fools while doing it.

I used to tell my students:  Imagine you are afloat on a raft in shark-infested waters.  You take out an ax and start hacking away at the raft.  How stupid is that?  Well, it’s as stupid as sin!

We may not always like the will of God, but going against it is like confusing cause and effect, like hacking away at our only support, like expecting deer to obey traffic signs.  Oh, deer!