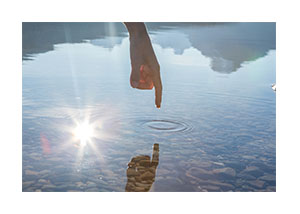 A Homily for the Eleventh Sunday in Ordinary Time, Year C

I am continually amazed at how the effects of sin are so very far reaching.  The results of sin, regardless of whether the original sin has been forgiven, endure from one generation to another.  Sin, like a rock which, thrown into a pool, sends out ripples of disturbance in all directions, has widespread and lasting effects.  Scenario #1:  A man abuses his wife.  His sons learn to repeat his behavior, and his daughters learn to expect that kind of behavior from the men they marry.  Scenario #2:  A woman is texting while driving.  Her car plows into another vehicle and kills a young couple and severely injures their children.  The children have to grow up having to endure unfathomable suffering, both physical and psychological.  Scenario #3:  A priest leaves a parish after embezzling hundreds of thousands of dollars.  The resulting spiritual and financial chaos leads to the church closing as well as to countless disaffected parishioners.

Even the results of our most secret sins have a way of rearing their ugly heads in broad daylight.  Priest and psychologist Father Andrew Cusak asserts:

[T]he most closeted sinfulness of any human life comes out in every relational reality of that life.  Whatever we are sowing, even in a most hidden way, …we are reaping in public, subtly and sometimes not so subtly.[1]

You won’t be surprised to learn that the Church actually has a name for all this.  It’s called temporal punishment (as opposed to eternal punishment).  The term “temporal punishment” is something of a misnomer.  Temporal punishment is not something God inflicts on us.  It is rather the negative fallout of our sin, as distinct from the sin itself, in ourselves, in the Church, and in the world.[2]  The classic illustration is that of a boy who disregards his father’s warnings and plays baseball with his friends in the front yard.  Sure enough, the baseball shatters the living room’s picture window.  The boy is repentant and contrite.  The father forgives his son’s transgression.  This, however, does nothing to replace the broken window.  The boy must pay for that out of his allowance.  Temporal punishment is like that broken window.  It’s not sin itself.  It’s the consequences, the fallout, or ripple effects of sin in ourselves, in the Church, and in the world.

We see this played out in our first reading from the Second Book of Samuel.[3]  The prophet Nathan, confronting King David, accuses him of adultery and murder.  David, on his part, admits his guilt.  God forgives David’s sin, and yet the Lord declares that “the sword shall never depart from your house.”  In other words, even though David’s sin itself is forgiven, its consequences, its ugly fallout, will endure in David’s family from one generation to another.  That is temporal punishment.

Here’s the good news.  If every time we commit a sin its negative fallout, its temporal punishment, lingers in history even long after the sin itself, the same sort of dynamic exists with regard to virtuous acts.  Perform a good deed, and its positive effects in yourself, in the Church, and in the world will continue for only the good Lord knows how long.  That, mes amis, is one reason why Dr. Randy Pausch, in The Last Lecture, is correct in saying:

A good apology has three parts:  I’m sorry.  It was my fault.  How do I make it right?  Most people skip that third part.  That’s how you can tell sincerity.

A person is not truly sorry unless he is willing to make amends, to undo some of the harm caused by his transgression.

What is true regarding our relationships with other human beings is also true when it comes to our relationship with God.  That’s why when we go to confession, the priest assigns us a penance to perform.  Doing penance does not earn us God’s forgiveness.  Forgiveness comes with absolution.  Performing penance serves to foster virtue in us, but it also helps to undo some of the temporal punishment, the negative consequences, caused by our sins.

Let us, therefore, go out into the world and do as much good as we possibly can, not to earn divine or human forgiveness, for forgiveness is never earned; it is bestowed.  Let us, however, do as much good as we can to undo the temporal punishment, the negative consequences, caused by our transgressions.  Then every virtuous deed we perform will be like a rock which, thrown into a tranquil pool, creates ripples of positive effects in all directions.  Every good deed we do will emit positive consequences like the fragrance of that ointment with which the penitent woman anoints Christ’s feet in today’s Gospel.[4]  If we persist in doing good, we shall never know the number of people over whom we will have a positive influence until we meet them all in heaven.  Let’s “pay it forward,” as they say and take to heart the words of Henry Wadsworth Longfellow in his poem “A Psalm of Life”:

Lives of great men all remind us

We can make our lives sublime,

And, departing, leave behind us

Footprints on the sands of time;

Footprints, that perhaps another,

A forlorn and shipwrecked brother,

Let us, then, be up and doing,

With a heart for any fate;

Learn to labor and to wait.

What The Heart Of The Young Man Said To The Psalmist.

[1] From a series of talks on audiocassette entitled Being Much, Becoming More.

[2] For a very thorough explanation of temporal punishment, see The Roman Catechism, published in the wake of the Council of Trent.