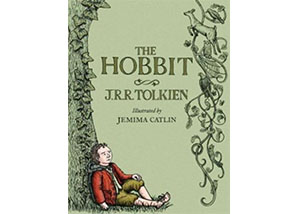 The movie The Hobbit, which hit the theaters in 2012, broke all sorts of box office records.  No wonder!  J.R.R. Tolkien’s book of the same title, on which the film is based, is a timeless masterpiece.  It tells the story of how Bilbo Baggins, a creature known as a hobbit, accompanied by thirteen dwarf companions and the wizard Gandalf, leaves his comfortable home in the West, goes through all sorts of harrowing adventures, defeats the evil dragon Smaug, and recovers the dragon’s vast treasure horde.  J.R.R. Tolkien, as many of you know, was a Roman Catholic, a friend of C.S. Lewis.  Although his narrative appears to be a children’s tale, it is full of many good lessons for grown-ups.  I’d like to discuss just two.

At one point in their adventures, as Bilbo and his friends are about to cross the Misty Mountains, they are captured by evil goblins and are taken prisoner deep underground.  It is here, in the pitch darkness of the mountains’ deepest cavern, that Bilbo encounters the slimy loathsome creature Gollum.  Yet it is here too that he finds the magic Ring—the Ring that will eventually give rise to all the later adventures of Bilbo’s cousin Frodo Baggins.  When, at last, Bilbo does escape from the goblins’ lair, he discovers to his great delight, that the Misty Mountains no longer lie to the east but are now to the west.  Bilbo did not cross up over the mountains, as he had intended.  Instead, he went down under them.

So here’s Lesson #1:  Progress in the spiritual life—the soul’s journey to God—always involves journeys through darkness.  Yet darkness is often the most direct route, and only in the darkness can one find God’s greatest gifts.

Much later in the story (at a point not covered in the first hobbit movie) Bilbo and the dwarves find themselves at the very outskirts of the dark and evil Mirkwood.  They are instructed to pass through this wood, but under no circumstances are they to leave the elf path on which they are traveling.  Bilbo and his band proceed along quite happily for several days, but (you guessed it) eventually they are tricked off the path.  As a result, they are attacked by giant spiders, taken prisoner by suspicious wood elves, and forced to make a risky escape which brings them out of Mirkwood within a hair’s breadth of their lives.  Yet despite all their bungling, errors, and narrow escapes, Bilbo and his companions manage to arrive at the secret entrance of the dragon Smaug’s cave on Durin’s Day, the only day on which the rays of the setting sun can reveal the hidden keyhole to the otherwise immovable door.  In short, they arrive just in time!

Here’s Lesson #2:  In the spiritual life, even when we wander off the right path, if we place our trust in God, He will bring us precisely where He wants us to be, at precisely the right time.  No evil—our own evil or the evil of others—can frustrate the designs of Almighty God for those who love Him.

Toward the end of the book The Hobbit, as Bilbo is again sitting comfortably in his own hobbit hole, drinking his own tea, he is gently reprimanded by Gandalf the Wizard:  “You don’t really suppose, do you, that all your adventures and escapes were managed by mere luck just for your sole benefit?  You’re a very fine person, Mr. Baggins, and I’m very fond of you, but you’re only a little fellow in a wide world after all.”

Today is Gaudete Sunday.  The Latin word Gaudete, the first word in the entrance antiphon for today’s Mass, means “Rejoice!”  Today is the day when we take special joy in anticipating the Second Coming (Greek Parousia) of Our Lord Jesus Christ.  Yet how can we be joyful in a dark and evil world?  We can be joyful precisely because wandering in darkness is not always the result of our own stupidity, but is part of the spiritual life.  Through it we gain wisdom of heart.  We can be joyful because no evil on earth or under the earth could ever thwart the plan of God for our lives if we but trust Him.

Let me end by quoting another Englishman, not J.R.R. Tolkien, but King George VI of England, the very king whose life was dramatized in the award-winning movie The King’s Speech.  This is one of my all-time favorite quotes.  These words were spoken by the monarch as part of a radio broadcast at Christmastime in 1939, but they are just as applicable today as they were then:

I said to the man who stood at the gate of the year: “Give me a light that I may travel safely into the unknown.”  And he replied: “Go out into the darkness, and put your hand into the hand of God.  That shall be to you better than light and safer than a known way.”  So I went forth and, finding the hand of God, trod gladly into the night.  And He led me toward the hills and the breaking of day in the Lone East.

In such a God, how can we not rejoice?  On this Gaudete Sunday, Saint Paul says (Philippians 4:4):  “Rejoice in the Lord always.  I shall say it again:  Rejoice!”