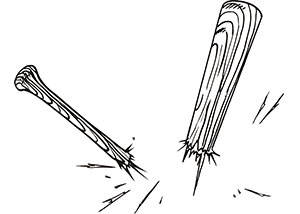 None but I makes much of naught.

–Francis Thompson, The Hound of Heaven–

When I was growing up in Allentown, Pennsylvania, during the 1960’s, a man who lived down the street from our family happened to be a fishing buddy of none other than Ted Williams, the retired left fielder for the Boston Red Sox.  It was not uncommon for Mr. Williams to be in our neighborhood during the summer months.

On one occasion, some of the boys prevailed upon the shy retiree to play baseball with them.  Gloves and balls appeared out of nowhere.  My younger brother John proudly provided the bat.

I remember little about the game that ensued.  Yet I shall never forget the thunderous crash that shattered the August air as Mr. Williams brought John’s bat in contact with the ball.  The results included a crowd of wide-eyed spectators and one cracked bat.

John was naturally upset about his broken bat.  He tried mending it with strong adhesive tape, but it was never the same.  It eventually was exiled to the woodpile, and from there it found its way to our fireplace.

When, almost forty years later, Ted Williams died in July of 2002, I phoned John.  “Just think,” I said.  “If only we had had the foresight to get Mr. Williams to autograph your bat—‘I was broken by Ted Williams in August of 1967’—we might be rich today!  If only we had fully appreciated the celebrity in our midst, we might have seen potential possibilities in that shattered bat!”

Dear Lord, give us faith so as not to miss the rich blessings and opportunities hidden in apparent tragedies.  When our dreams are shattered, help us to be open to the possibilities right before our eyes.