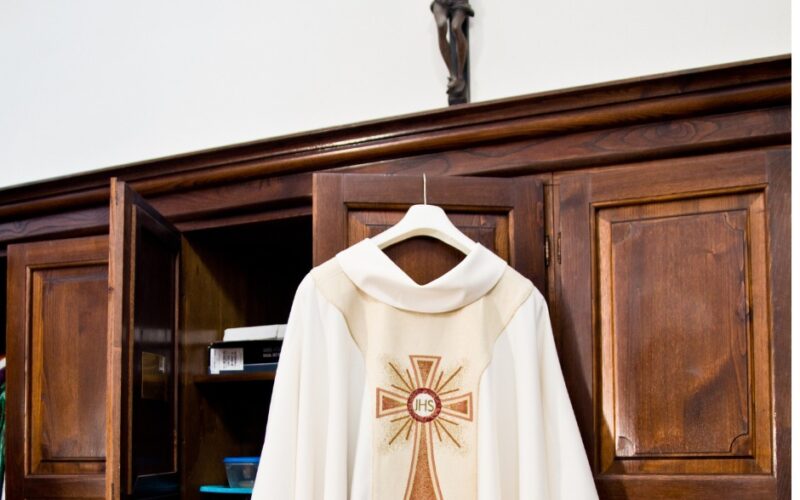 A Homily for the Twenty-Eighth Sunday in Ordinary Time, Year A

But when the king came in to meet the guests, he saw a man there not dressed in a wedding garment.  The king said to him, “My friend, how is it that you came in here without a wedding garment?” But he was reduced to silence.

In our Gospel, we have a man who’s got the chutzpa to show up at a royal wedding feast without the customary garment, and so today I thought I’d say a few words about proper attire at Mass.  Hey, this Gospel passage comes up only once every three years, so I want to strike while the iron is hot and take the opportunity while I have it.  So here are my thoughts on dressing for Mass.

At the outset let’s make it perfectly clear.  As a legally blind priest, I’m not singling out any one of you in particular.  For all I know, most of you could be sitting out there right now in your birthday suits.  I simply want to make a few general observations.

Speaking of birthday suits, one of my friends tells the story about a female fellow student at Fordham University who got reamed out by a religious sister for being inappropriately dressed for Mass.  What did the young offender do in response?  She showed up for another Mass at the big Fordham University Church wearing nothing at all!  The church was so large and the altar so far away from the congregation that the eighty-year-old priest, who had not processed in from the rear of the church but had instead gone directly to the altar from the sacristy, had no idea what was going on.  Sure, there were titters of laughter among the assembled students, but Father McNulty proceeded with the liturgy as usual.  It was only during the distribution of Holy Communion that he perceived the Lady Godiva copycat.  He made no apparent reaction at the time, for he knew that the girl in question had recently suffered the loss of a very dear loved one.  After Mass, however, as he was greeting the students filing out of the church, Father McNulty kindly pointed out to the nudist that her lack of attire was taking attention away from him.  “I’m the one with the fancy clothes, my dear,” he chuckled.  “People should be looking in my direction, not yours.”  The young lady in question took the kindly comment to heart and never pulled a stunt like that again.  The other members of the congregation, aware of Father McNulty’s concern for the girl, were simply impressed that the priest didn’t blow a gasket.  Here, then, is a lesson:  We should never judge people on the basis of how they dress (or not dress).  There might be underlying issues about which we have no idea at all.

I have one more story.  Monsignor Anthony Muntone, God rest his soul, used to relate how, years ago, a missionary to Africa was celebrating the old Latin Mass for his flock.  As he turned from the altar, the priest observed that a little boy had come forward from the congregation to act as an altar server.  The child, however, wore not a stitch of clothing!  “Put something on, son,” the priest gently whispered.  The boy obediently darted into the sacristy and in a few moments reemerged wearing…a cap on his head!

I think we can all agree that showing up for Mass in our birthday suits is totally inappropriate.  How, then, should we dress for Mass?  Maybe it might help if we begin by considering clothing, well, as a kind of giftwrap.

For the people of Japan, the land of my ancestral heritage, gift wrap is no mere external.  On the contrary, the Japanese regard a beautifully packaged present as an art form in and of itself.  Such a gift, they believe, is a triple statement of honor.  The well-wrapped gift bespeaks the generosity of the giver, the value of the gift, and the dignity of the recipient.  Thus if clothing is anything at all like giftwrap, a modestly and tastefully dressed individual gives evidence of self-respect, self-worth, and respect for others.

Let’s talk about self-respect and self-worth.  Jewelers, aware of the value and worth of what they sell, generally package fine jewelry in exquisite, felt-lined gift boxes.  Saks Fifth Avenue, for example, would never allow a diamond bracelet to leave the premises in a flimsy, McDonald’s Styrofoam hamburger box.  Just so, when we dress properly and modestly, we tell others that we have self-respect and that the person who lies beneath our clothing has value.

What about respect for others?  Just as a well-wrapped gift bespeaks esteem for the recipient, so our modest, tasteful attire shows that we honor those around us.  Dennis Prager, the Jewish grandfather I always wanted but never had, underscores the respect for others that proper attire conveys.  In one of his Fireside Chats, he says:

You watch, for example, it will blow your mind…  Go on the internet and watch videos or [look at] still pictures of baseball games….  Look at baseball games… The women were dressed in dresses and the men were dressed in jackets and ties at a baseball game.  Why did people do this?  Everybody’s more comfortable in a T-shirt, so why did they get into relatively uncomfortable clothing to go to a baseball game?  The answer is it wasn’t for the baseball game.  It was because they left their house…  There was throughout history until the 60s in all of Western culture, there was the sense that if you went out into the public, you owed it to others, it sort of honored other people, to look nice.  That was the thinking.  You were dressing up, not for you, you were dressing up for others.  And that is exactly the way it was perceived.  People got dressed to travel.  When I was a kid and you went on an airplane, everybody was dressed nicely. Today there is no difference whatsoever between airplane travel and people’s dress and going to the beach.  People come in flip-flops.  People come in shorts.  People come in T-shirts.  Right?  Whatever is comfortable they wear.  And there’s no self-consciousness about it.  By the way, I understand.  This doesn’t make a person good or bad.  I’m just talking about clothing.  I’m not judging people….  I’m judging clothing.  I’m judging the idea of looking good for others.[1]

Thus says Dennis Prager.  When we dress appropriately, we are actually paying tribute to others.

What about dressing in church?  Formal, modest attire in church—I’m not talking about a fashion show—formal, modest attire in church is, above all, a sign of love for God.  Consider this.  What bride on her wedding day would want to walk down the aisle dressed in sweatpants?  Sure, her groom would love her no matter what she happened to be wearing, but she will want to dress up in a beautiful gown, even on the hottest day, so as to be beautiful for her beloved.  When you get right down to it, it’s very much like that when it comes to dressing for Mass.  We dress well for Mass to express our love for Jesus, the Bridegroom, who, quite frankly, loves us no matter what we wear.  Love for God is the primary motive for dressing well for Mass.

Love, in fact, is the primary reason why a priest vests for Mass.  Suppose I were to walk down the aisle for Mass wearing simply a stole draped over my clerical shirt.  I am sure the Bishop would hear about it even before the end of the liturgy.  True, God loves me no matter what I wear, but wearing Mass vestments is one way for a priest to express his love for God.  More specifically, as a priest dons the amice, he thinks of the helmet of salvation.[2]  As he puts on the alb, he asks that he be whitened in the Blood of the Lamb.[3]  As he girds himself with the cincture, he prays for the grace of chastity.  As he puts the stole around his neck, he asks for the gift of immortality.  Finally, as he vests himself in the chasuble, he prays to bear the gentle yoke of Christ.  This last prayer just so happens to be my favorite vesting prayer:

Lord, You who said, “My yoke is easy and my burden light,”[4] cause me to have the strength to bear it in such a way that I attain Your grace.  Amen.

A priest’s number one reason for putting on all these vestments is nothing less than the love of God.

To sum up: To the extent that clothing is like giftwrap, modest and appropriate dress bespeaks both self-esteem and respect for others.  When it comes to dressing for church, however, the stakes are somewhat higher.  Appropriate dress, like a bride’s gown, is evidence of love.  Modest and tasteful attire, like a priest’s vestments, is an expression of our love for God.

We can all agree that showing up for Mass in our birthday suits is not ideal; after looking at the bare facts of the matter, however, I think we can also be a little more conscious as to how we dress when appearing at the royal wedding banquet.

[1] Dennis Prager, Fireside Chat, Episode 80: “Why Does Dennis Wear a Suit at Home?” my own transcription.