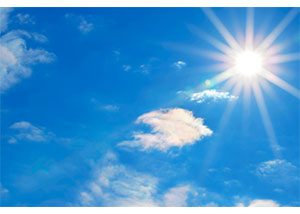 The words of the reckless pierce like swords, but the tongue of the wise brings healing.

Today we celebrate the Feast of the Holy Trinity.  On this day, the Church holds before our eyes the sublime doctrine that, in the one divine nature of God, there are three divine Persons–Father, Son, and Holy Spirit.  The doctrine of the Trinity is the very cornerstone of the Catholic Faith.  In heaven, it will be our joy to contemplate the Trinity forever.

Okay, that’s nice theology, but what in heaven’s name does the doctrine of the Trinity mean for us, right here and now, as we live out our daily lives?  One consequence of the Church’s Trinitarian doctrine, for me, anyway, is pretty obvious:  If we human beings are made in the image and likeness of the Triune God, Who is Almighty, then the very process by which we make and use words is also triune and powerful.  Let me say that once more.  If we human beings are created in the image and likeness of a God Who is Triune and powerful, then our speech, our word-making, is also triune and powerful beyond our wildest dreams.  You may ask: “Is our word-making triune? Does our ability to speak and write involve a kind of trinity?”  You bet it does!

My favorite mystery writer, Dorothy L. Sayers, is also a theologian.  In her book, The Mind of the Maker, she rightly observes that, because we human beings are made in the image and likeness of the Triune God, it is no coincidence that each word we express has a threefold existence.  First, every word we speak or write exists in the mind of the speaker or author.  Next, it finds incarnation in the act of expression.  Finally, it lives in the hearts of all who hear or read it.  The very process by which we craft words–idea in the mind, expression via tongue or pen, power in the listeners or readers–is a mirror of the Trinity, Father, Son, and Holy Spirit, in Whose image and likeness we are made.  And here I would argue that, just as only the Triune God can create and annihilate, in the strict sense, so our human words have an awesome potential to nurture or to destroy.  I give you one last story.  I’ve been dying to share this story with you.  It is called, You Are My Sunshine.[1]

Like any good mother, when Karen found out that another baby was on the way, she did what she could to help her three-year-old son, Michael, prepare for a new sibling.  The family found out that the new baby was going to be a girl, and, day after day, night after night, Michael sang to his sister while she was still in the womb.  He was building a bond of love with his little sister even before he met her.

The pregnancy progressed normally for Karen, an active member of the Panther Creek United Methodist Church in Morristown, Tennessee.  In time, the labor pains came.  Soon they were every five minutes, every three, every minute.  But serious complications arose during delivery, and Karen found herself in hours of labor.  Would a C-section be required?

Finally, after a long struggle, Michael’s little sister was born; but she was in very serious condition.  With a siren howling in the night, the ambulance rushed the infant to the neonatal intensive care unit at St. Mary’s Hospital, Knoxville, Tennessee.  The days inched by.  The little girl’s condition became worse.  The pediatrician had to tell the parents that there was very little hope:  “Be prepared for the worst.”  Karen and her husband contacted a local cemetery about a burial plot.  They had fixed up a special room in their house for their new baby.  Now they found themselves having to plan a funeral.

Michael, however, kept begging his parents to let him see his sister.  “I want to sing to her,” he kept saying.  Week two in intensive care looked as if a funeral would come before the week was over.  Michael kept insisting on singing to his sister, but kids are never allowed in Intensive Care.  Karen decided to take Michael whether they liked it or not.  If he didn’t see his sister right then, he might never see her alive.  She dressed him in an oversized scrub suit and marched him into ICU.  He looked like a walking laundry basket.  The head nurse recognized Michael as a child and bellowed, “Get that kid out of here now!  No children are allowed!”  The mother’s instinct rose up strong in Karen, and the usually mild-mannered lady glared steely-eyed right into the head nurse’s face, her lips a firm line.  “He is not leaving until he sings to his sister,” she asserted.

Then Karen towed Michael to his sister’s bedside.  He gazed at the tiny infant losing the battle to live.  After a moment, he began to sing.  In the pure-hearted voice of a three-year-old, Michael sang:  “You are my sunshine, my only sunshine.  You make me happy when skies are gray.”  Instantly the baby girl seemed to respond.  Her pulse rate began to calm down and become steady.  “Keep on singing, Michael,” encouraged Karen, with tears in her eyes.  “You’ll never know, dear, how much I love you.  Please don’t take my sunshine away.”  As Michael sang to his sister, the baby’s ragged, strained breathing became as smooth as a kitten’s purr.  “Keep on singing, Sweetheart.”  “The other night, dear, as I lay sleeping, I dreamed I held you in my arms.”  Michael’s little sister began to relax as rest, healing rest, seemed to sweep over her.  “Keep on singing, Michael.”  Tears were now flowing down the face of the bossy head nurse.  Karen glowed.  “You are my sunshine, my only sunshine.  Please don’t take my sunshine away….”

On this Feast of the Holy Trinity, we are reminded that, just as God is Triune– Father, Son, and Holy Spirit–our words are triune too: idea in the mind, expression in speech or writing, and impact on others.  And just as God is powerful, so also is our word-crafting.  You’ve heard me say over and over again how destructive are profanity, put-downs, and abusive language.  I’ve been saying this for the past twelve years.  Can you see why?  Every time we use profanity, abusive language, or put-downs, not only do we inflict evil and destruction on those around us, but we also miss the opportunity to do the positive good that our uplifting words might have accomplished.

Let me take this opportunity then, on this Trinity Sunday, to apologize to you, Class of 2001, if any of us at Bethlehem Catholic High School–whether principal or priest, administrator or instructor, cafeteria worker or coach–has ever used profanity, put-downs, or abusive language.  No one has the right to say such things.  No one deserves to hear them.   Please forgive us.  We know not what we do.

On the other hand, I urge you to call to mind the many positive things we have taught you.  I wish I had time to include all of the wholesome maxims from our faculty, administration, and coaches, but here’s only a brief sampling of our uplifting advice.  So listen up, you Momos, or you’ll get a coupon redeemable at Student Affairs!

If ever you should even begin to contemplate doing something that you know is wrong, recall Mr. D’s perennial question:  “Do you think of the consequences?”  If ever you are about to lose heart and throw in the towel, remember what Mr. Grasso has told you:  “Keep your head up, and don’t quit.”  For those of you who had Mrs. Peoples, “Mañana es otro día y otra oportunidad.”  And if you’ve set sail aboard the Stella Maris, you’ll know that “A smooth sea never made a skillful sailor.”  Here’s my favorite bit of advice. Instead of merely attending Mass, do what Mr. McGorry says:  “Be a front-row Catholic. Get involved in your Church!”

Finally, let me end with a sentiment that I am sure is shared by all of us at Bethlehem Catholic–whether principal or priest, administrator or instructor, cafeteria worker or coach.  We might not always know how to say it, but remember this, O Class of 2001:  You are our sunshine. You make us happy when skies are gray.  Whatever else others may tell you, never, ever forget that.

[1] Some months after delivering this homily, I learned, somewhat to my embarrassment, that You Are My Sunshine is only an urban legend!  It is taken, and slightly altered, from: Earl Bailey, “Family Sings Praises of Miracle,” The News Herald, 7 November 1998, p. 13.