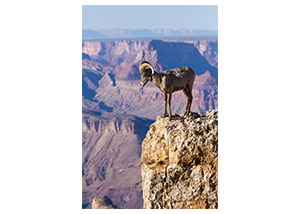 Jesus said to the crowds: “This is how it is with the kingdom of God; it is as if a man were to scatter seed on the land and would sleep and rise night and day and through it all the seed would sprout and grow, he knows not how.  Of its own accord the land yields fruit, first the blade, then the ear, then the full grain in the ear.  And when the grain is ripe, he wields the sickle at once, for the harvest has come.”  He said, “To what shall we compare the kingdom of God, or what parable can we use for it?  It is like a mustard seed that, when it is sown in the ground, is the smallest of all the seeds on the earth.  But once it is sown, it springs up and becomes the largest of plants and puts forth large branches, so that the birds of the sky can dwell in its shade.”

Most great occurrences happen gradually over time, almost imperceptibly.  The formation of the Grand Canyon by the Colorado River, a civilization’s rise and fall, or even a child’s growth into adulthood—all of these are relatively slow and gradual processes.  It should, therefore, come as no surprise that growth in holiness is usually a slow and gradual affair, happening little by little.  In the 17th Century, Saint Francis de Sales, Bishop of Geneva and master of analogies, said this:

Saint Paul received perfect purification instantaneously, and a like grace was conferred on Saint Magdalene, Saint Catherine of Genoa, Saint Pelagia, and some others.  But this kind of purgation is as miraculous and extraordinary in grace as the resurrection of the dead in nature.  Nor dare we venture to aspire to it.  The ordinary purification, whether of body or soul, is accomplished only by slow degrees—step by step, gradually, and painfully. …  The soul which rises from out of sin to a devout life has been compared to the dawn, which does not banish darkness suddenly but by degrees.  That cure which is gradually affected is always the surest … so that we must needs be brave and patient…in this undertaking….  [T]here is an extreme danger surrounding those souls who…are disposed to imagine themselves purified from all imperfection at the very outset of their purgation, who count themselves as full grown almost before they are born and seek to fly before they have wings.[1]

Thus writes Saint Francis de Sales.  Growth in holiness is almost always a gradual affair.  That’s why Our Lord tells us that the Kingdom of God is like seed growing slowly in the ground, like plants gradually coming to maturity:

The kingdom of heaven is like a mustard seed that a person took and sowed in a field.  It is the smallest of all the seeds, yet when full-grown it is the largest of plants.  It becomes a large bush, and the “birds of the sky come and dwell in its branches.”[2]

Yet—I hate to say it—the same sort of description also applies to the growth and spread of evil.  Not only are the best saints most often made gradually over time, but so too are the worst sinners.  In The Screwtape Letters, that awesome book from which I am always quoting, C.S. Lewis assigns these words to his fictional demon, Screwtape, in advising another demon, Wormwood, on the best way to get a soul into hell.  In what follows, “the Enemy” refers, of course, to God:

My dear Wormwood,….do remember, the only thing that matters is the extent to which you separate the man from the Enemy.  It does not matter how small the sins are, provided that their cumulative effect is to edge the man away from the Light and out into the Nothing.  Murder is no better than cards if cards can do the trick.  Indeed, the safest road to Hell is the gradual one–the gentle slope, soft underfoot, without sudden turnings, without milestones, without signposts.[3]

It’s a slow fade when you give yourself away

And thoughts invade, choices are made, a price will be paid

When you give yourself away

People never crumble in a day

Yes, most great occurrences happen gradually, almost imperceptibly—the making of a saint and the damning of a soul.

If our progress toward heaven or our descent toward hell is so gradual, how can we be sure we’re going in the right direction?  How can we be certain that our movement is upward rather than downward?  Here let me give you a little story you may have heard before:

One evening, an elderly Cherokee brave told his grandson about a battle that goes on inside people.  He said, “My son, the battle is between two ‘wolves’ inside us all.  One wolf is evil.  It is anger, envy, jealousy, greed, arrogance, self-pity, resentment, lies, false pride, superiority, and ego.  The other wolf is good.  It is joy, peace, love, hope, serenity, humility, kindness, benevolence, empathy, generosity, truth, compassion, gratitude, and faith.”  The grandson thought about this for a minute and then asked his grandfather: “Which wolf wins?”  The old Cherokee simply replied: “The one that you feed.”

The soul’s progress toward heaven or hell is so gradual that, at any given moment, we may not be entirely sure in which direction we are moving—for we are indeed moving whether we know it or not.  But of one thing we can be sure.  We become like that on which we feed.  “You are what you eat” is as true of the spiritual realm as it is of the physical realm.  If we wish to become saints, it’s not enough simply to reject evil.  We must also embrace the good.  It’s not enough merely to turn away from sin (what Saint Augustine calls aversio a peccato).  We must also turn toward God (conversio ad Deum).

Here is just one illustration.  If I were prone to look at pornography, which I am not—sometimes I am so grateful for my rotten eyesight—if I were prone to look at pornography, I would have to do more than simply turn away from impure images.  I would also have to go out of my way to fill my mind with wholesome pictures.  Bishop Fulton Sheen is right when he says, “We cannot drive evil out of our heads, but we can crowd it out.”

In this context, I want to recommend a new, viral video series called The Chosen.  This is a wonderful retelling of the story of Jesus but with fictional, yet very believable, back stories on all the figures that surround Our Lord.  The series is directed by an Evangelical Christian named Dallas Jenkins, and the actor who plays Jesus is a devout Catholic named Jonathan Roumie.  So far there are only eight episodes, covering the time from the beginning of Jesus’ public ministry up to His encounter with the woman at Jacob’s well.  I find myself moved to tears as I watch them.  My favorite character so far is Matthew the tax collector.  He is, I think, portrayed as someone with Asperger syndrome.  He is somewhat obsessive-compulsive and socially backward, but he is brilliant with numbers, and, best of all, he has a remarkable ability to recall vivid details—not a bad trait for a future Gospel writer!  My favorite episode is Episode Five, the one on the wedding feast at Cana.  There are more episodes in the making, but you can get the ones that are available on YouTube or on a free app for your smart phone or iPad.  If you are so moved, you can even contribute to the endeavor.  I love The Chosen!  So, too, by the way, does the Catholic convert and Bible scholar, Scott Hahn.  I won’t be offended if, even right now, you were to take out your smart phone and download the free app for The Chosen.

Just to be clear, the pictures we put into our minds do not have to be explicitly religious.  They do, however, have to be entirely wholesome.  Why not, as a matter of course, go on YouTube and watch old episodes of the Carol Burnett Show?  I can’t think of anything better than the segment with Tim Conway as a dentist and Harvey Korman as his unfortunate patient!  Why not watch the movie, The Princess Bride?  It’s inconceivable that anyone can see that without laughing.  Why not listen to clean comedians like Jeff Alan or even Abbott & Costello?  My sophomores at Bethlehem Catholic High School would crack up the first time they heard the “Who’s on First?” routine.  When it comes to fighting a pornography problem, it is better to laugh than to lust.

To sum up, most great occurrences happen gradually over time, almost imperceptibly.  We become like that on which we feed.  The question is:  What wolf—what appetites—am I feeding?  In other words, in which direction am I gradually heading?

[1] Introduction to the Devout Life, Part I, Chapter 5.