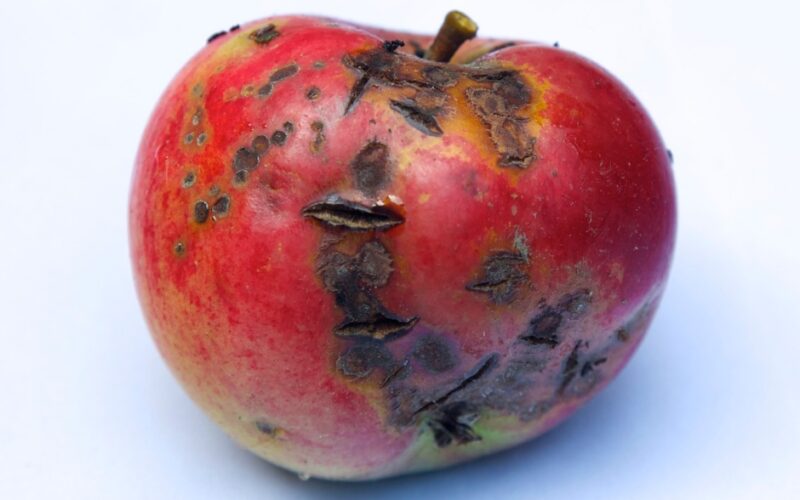 A good tree does not bear rotten fruit, nor does a rotten tree bear good fruit.  For every tree is known by its own fruit.  For people do not pick figs from thornbushes, nor do they gather grapes from brambles.

What’s worse than finding a worm in your apple?  We all know the answer:  Finding half a worm!

Jesus tells us that “every tree is known by its own fruit,” but when you stop to think of it, a worm in your apple might not be the fault of the apple tree.  The real culprit may be the codling moth, which lays its eggs on the surface of developing fruit, and, in point of fact, it’s often the best fruit that gets selected.  A bad apple might also result from the plum curculio, a weevil that lays an egg just beneath the fruit’s skin.  Another insect, the maggot fly, actually lays its eggs in the apple blossom itself and thus ruins the fruit at the very outset.  As if these three pests were not enough, there’s an additional apple foe: a fungal disease known as apple scab.  Thus it’s not a good idea to judge the virtues of an apple tree simply by looking at its worm-laden or fungus-tainted fruit.  We must look, rather, at the whole, ripe fruit still on the bough.

When I was in seminary, I came across a book written in 1938 entitled Discourses on the Apostles’ Creed by Father Clement H. Crock.  Father Crock underscores the Church’s essential holiness by using the analogy of the apple tree.  He writes:

We cannot judge a Church by her worst members.  We do not judge the merits of an apple-tree from the rotten apples that lie in profusion upon the ground beneath it, but rather from the ripe fruit on the bough.  The bad fruit owes its foulness, not to the tree that bore it, but to outside influences such as the sting of an insect or the presence of a worm.  Much the same, bad Catholics owe their wickedness to causes wholly foreign to the Church.  Usually they are bad precisely because they do not live in conformity with the requirements of their Church.[1]

Well, if that’s the case, on what basis do we judge the merits of the Church?  I believe it’s best to evaluate the Church, not by looking at bad Catholics, but by turning our attention to the lives of the saints.  Author Frederick W. Marks reminds us:

Bad apples there will always be.  Judas was the first in a long line.  But remember that the Church has always produced, and continues to produce, men and women of the caliber of John Paul II, Mother Teresa of Calcutta, and Mother Angelica.[2]

If the Church is like an apple tree, then the saints are like healthy fruit still clinging to her branches.

Unfortunately, the average go-to-church-on-Sunday Catholic hears precious little about the saints at Mass.  Therefore, ladies and gentlemen, let me recommend two books.  The first is The Bad Catholic’s Guide to Good Living by John Zmirak and Denise Matychowiak.  One critic gives a perfect description of this book: “Silly some of the time, respectful most of the time, and hilarious all of the time.”  No kidding!  The cover boasts a picture of Pope John Paul II making a funny face by peering through the two rings formed by his thumbs and index fingers.  Another reviewer writes, “This book is outrageous….  What rescues it is that it is not based on a sophomoric parody of Catholic exaggeration but on a clear love of the sheer facticity of Catholicism.”  Here, for example, is what the authors have to say about Saint Thérèse of Lisieux:

Have you ever eaten a candied jalapeño pepper?  We don’t advise it, nor do we suggest that bad Catholics look too closely at the story of this simple, apparently unexceptional French country girl who died at age twenty-four.  On the surface, her tale is sweet—almost cloyingly so.  The immensely popular images depicting Thérèse transmute her sober, otherworldly expression into an insipid smile, and load her down with enough party pink roses that she seems like a nun who took a side job working for 1-800-FLOWERS.  Indeed, her statues typically seem as if they should be made of marzipan.  But this young girl from a large and loving family went on a spiritual safari that few of us could endure, which is harrowing even to read about.[3]

That’s only the introductory paragraph.  Zmirak and Matychowiak go on to explain that, beneath Saint Thérèse’ calm and sweet exterior, there raged a fiery battle for her soul.  The Little Flower was indeed very much like a candied jalapeño pepper.

By the way, The Bad Catholic’s Guide to Good Living contains a lot of really interesting recipes.  You can try your hand at making Saint Agatha popovers, red wine tapioca pudding, or devil’s food cake.  Again the book is entitled The Bad Catholic’s Guide to Good Living.  I won’t be offended if you take out your cellphones right now and order it from Amazon.  I won’t be able to see you anyway.

The other book I want to recommend is Saints Behaving Badly by Thomas J. Craughwell.  The subtitle says it all: The Cutthroats, Crooks, Trollops, Con Men, and Devil Worshippers Who Became Saints.  This volume’s pages contain no saccharin sagas of the lives of the saints, no pathetic pious platitudes, no fraudulent fluff.  Just consider some of the chapter titles:  “St. Matthew, Extortionist,” “St. Dismas, Thief,” “St. Callixtus, Embezzler,” “St. Genesius, Scoffer,” “St. Augustine, Heretic and Playboy,” “St. Patrick, Worshipper of False Gods,” “St. Mary of Egypt, Seductress,” “St. Olga, Mass Murderer”—I’d get the book for that chapter alone—, “St. Vladimir, Fratricide, Rapist, and Practitioner of Human Sacrifice,” “St. Thomas Becket, Hedonist,” “St. Margaret of Cortona, Rich Man’s Mistress,” “St. John of God, Gambler and Drunkard.”  Hey, there’s hope for us all!  Again, the book is Saints Behaving Badly by Thomas J. Craughwell.  I think it would make a great gift for some young person you know who is going off to college.  It reminds us that many of the saints were rotten apples who actually turned good.

That, I think, is what’s really miraculous about the Church.  Sure, some of her members have been spoiled under the influence of worms, but if we know a tree by its fruits, then it is remarkable that, down through the ages, the Church has been able to produce some incredible saints.  In some instances, she has even managed to transform rotten apples into fabulous fruit.  What a tremendous tree the Church is!

[2] “BREAKING UP IS BAD TO DO: Letter to a Friend on Church Scandal,” The New Oxford Review, 2019 January-February.  “Frederick W. Marks is the author of ten books, including, most recently, Confessions of a Catholic Street Evangelist and Pro-Life Champion: The Untold Story of Monsignor Philip J. Reilly and His Helpers of God’s Precious Infants.”