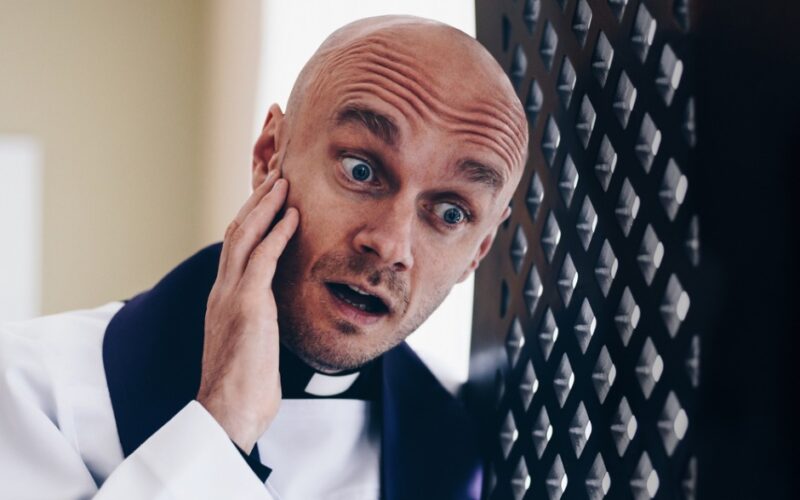 A Homily for the Fifth Sunday of Lent, Year C

Then Jesus said, “Neither do I condemn you.  Go, [and] from now on do not sin any more.”

I have the strength for everything through him who empowers me.

The one who sat on the throne said, “Behold, I make all things new.”

This past Friday, I was telling Msgr. Tom that, after almost a decade out of the classroom, I still remember the names of the students whom I caught cheating and lying.  “Tell me anything you want in confession, and I will forget,” I said, “but if I catch someone lying or cheating, I will remember it.”

To this, Monsignor responded in his inimitable fashion: “Get over yourself, Bernie!  Students lie all the time.  They can change.”

It just so happened that hours earlier, I had listened to Candace Owens’ latest podcast In which she interviewed Pastor Joshua Broome, who, prior to his conversion, was, believe it or not, an “adult entertainment” star for six years, during which time he made more than one thousand X-rated movies.[1]

At the end of the day, you’re laying your head down on a pillow, and it doesn’t matter how much money you’re making or how much travel you’re doing.  You feel terrible about yourself, because there’s no way that you’re proud that you’re prostituting yourself….  It became both monotonous and darker at the same time….  I didn’t really think about what I was doing.  And me as a person—I really stopped existing….  You believe the lie that you are what you do….  The big lie that many people say—“This is just who I am”—is such a terrible lie from the very pit of hell, and it’s going to lead you to death.

At this point in the interview, Candace throws in her two cents:

Talking about that idea that people can’t change is very important, because as we now get into this society that won’t even let children evolve from a tweet that they sent when they were twelve years old.  “This is who you are.  You sent something racist when you were twelve, and therefore you are a racist forever.”  Teenage suicide is getting younger and younger—eleven-year-olds committing suicide because they did something embarrassing on Snapchat and it went around the school.  And this culture is actually being perpetuated by the journalists and the media.  They’re saying, “Yes, look what I found this person did ten years ago.”  You’re not allowed to evolve.  What a death sentence that is to an individual soul!  To say, “You can’t change your mind, you can’t change your perspective, you can’t change who you are”—that’s a very scary, dark pit of hell.  That’s putting an individual in a pit of hell.  Obviously you’re story proves that you saw something else.  You said, “Actually, no, I can change.”

Today Joshua Broome is an occasional preacher at the Good News Baptist Church in Cedar Rapids, Iowa.  He also hosts a podcast called “Counterfeit Culture.”  Married in 2016, he and his wife Hope have three children.  He’d make a good Catholic!

In our Gospel, Jesus tells the woman caught in adultery, “Go, [and] from now on do not sin any more.”  How wonderful!  As Pastor Broome says, “The truth is today, regardless of what your life looks like and what you’ve done, you can choose to move in a different direction.  You can choose to create a different version of yourself, a better version of yourself, based on truth.”  In other words, in Christ, we need not be shackled by our past.  We can be free to be the kind of people God intends us to be. We can say with Saint Paul, “I can do all things in him who strengthens me.”[2]

Jesus Himself says, “I make all things new.”[3]  This may very well apply even to my former students!