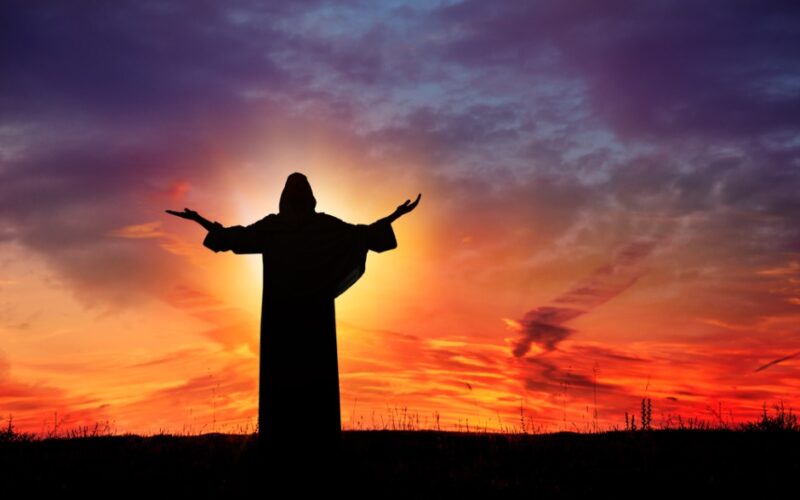 A Homily for the Seventh Sunday of Easter, Year C
I have never had misgivings about my priesthood, but the older I get, the more seriously I take my ordination.  For example, when I was a young priest, I recall reading that when the Italian mystic Saint Mary Magdalene de’ Pazzi was shown a vision of priests in purgatory, she actually trembled with horror.  She let out a loud cry: “What is this?  Priests and religious in this horrible place?  O my God, my God, how tormented they seem to me!”[1]  I later learned that hell is much worse for priests than it is for the non-ordained.  Alas! I feel as though I have read the fine print in a contract only after signing it!  Here is another illustration of just how grave the priesthood really is.

On Friday, I was listening to a podcast[2] hosted by a Protestant woman who happens to be married to a Catholic husband.  This particular host told how her husband asked her why she has not yet converted to Catholicism.  Here’s what she replied, “I find it so problematic that….the Catholic Faith is not being reflected in the leadership.”  What a telling remark!  This Protestant podcast host is basically saying that she would be more inclined to become Catholic herself if Catholic religious leaders were unanimous in proclaiming and living out the faith the Church professes.

But should we be surprised at this?  In our Gospel, Jesus, speaking to the Father, says:

I pray not only for them, but also for those who will believe in me through their word, so that they may all be one, as you, Father, are in me and I in you, that they also may be in us, that the world may believe that you sent me.[3]

How can the world possibly embrace the Catholic Faith if some of the Church’s shepherds say one thing and others say something completely different?

All I can say is: pray for your clergy.  Pray that we keep before our eyes our particular judgment, when we will be judged not on how popular we were in life but on how faithful we were to the teachings of Christ.  Likes on social media will mean nothing.  What will count will be how well we proclaimed the sanctity of human life from the moment of conception to natural death, how well we championed the unambiguous meaning of marriage as a covenant between a man and a woman, how well we expounded the sanctity of the marriage act as both unitive and procreative—in other words, excluding all artificial contraception, how faithfully we proclaimed the vital importance of the traditional family, how clearly we taught the necessity of subsidiarity, that is, accomplishing as much as possible in the local community and resorting to larger entities only when necessary.  What will matter will be how well we proclaimed the real Presence of Christ in the Eucharist, the imperative of getting to heaven, and the danger of losing one’s soul in hell.  The clergy’s unanimity on all these points will be what draws people into the Church.

And make no mistake.  Jesus wants people to enter His Church.  Dr. Peter Kreeft, in his 2022 Commencement address given at the Franciscan University of Steubenville, described another why-haven’t-you-become-a-Catholic moment:

Mother Teresa once said to Malcolm Muggeridge, the brilliant and cynical British journalist who had become a Christian but not yet a Catholic, “Malcolm, you’re a good man.  Why don’t you go all the way and become a Catholic?”

Malcolm replied, “Well, to answer you in your own words, Mother, I guess God sees that I’m a good man and He needs some good men outside His Church as well as inside.”

And then Mother Teresa uttered three words, “No He doesn’t.”

And Malcolm writes in his autobiography, “I could not answer that argument, so I became a Catholic.”

Nobody ever won an argument with Mother Teresa…except God.[4]

Saint John Vianney once observed that “A priest goes to Heaven or a priest goes to Hell with a thousand people behind.”  Pray that your clergy may be one, as Christ and the Father are one.  Then the whole world will be both one in heart and won for heaven.

[4] “10 Lies of Contemporary Culture,” delivered 14 May 2022, available on YouTube.  The excerpt given above is my own partial transcription.