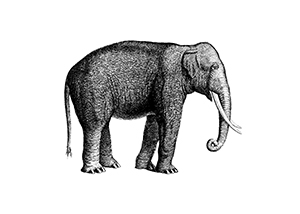 A Homily for All Saints Day

The point is that the elephant is so big that no one of the blind men can give a complete description.  In one way, they are all right.  In a certain sense, an elephant is like a snake or a spear or a fan, a wall or a tree or a rope—but not quite.  An elephant is all that and much, much more.

Now when it comes to describing God, each of the saints is like one of those blind men in the parable of the elephant.  Each saint can tell us something about God.  Each saint can give us a “feel” for who God is.  Yet the reality of God is so awesome, so far beyond us, that no one saint can provide a complete description of God.  That’s why the more saints we get to learn about and know, the better will be our knowledge of who God really is.  Here are just eight examples to correspond with our Lord’s eight Beatitudes.[1]

Saint Francis of Assisi was poor in spirit, and he tells us something about the joy of God.  Saint Mary Magdalene knew what it was to mourn, and she reminds us that God is forgiving.  Saint Thérèse of Lisieux  was meek and humble.  From her we learn that God is faithful.  Saint Joan of Arc hungered and thirsted for righteousness, and in her we see that God honors obedience.  King Saint Louis of France was merciful, and he teaches us that God is both merciful and just.  Saint Thomas Aquinas was pure of heart, and he shows us that God is far more awesome than words could ever describe.  Saint Catherine of Siena was a peacemaker.  She teaches us how much God loves the Pope.  Finally, Saint Girard Majella was falsely accused and persecuted.  His story illustrates that God will always have the last word.

Thus each saint reveals a different truth about God.  That’s why it is good to learn about as many saints as we possibly can.  The more saints we know and love, the greater will be our knowledge and love of God.

Here’s an important corollary:  If you and I become saints, each one of us will be able to reveal a truth about God that no other saint can.  It follows that the more of us there are in heaven, the happier we all will be.  C.S. Lewis, in fact, gives this tantalizing description of Heaven:

Surely…each of the redeemed shall forever know and praise some one aspect of the divine beauty better than any other creature can.  Why else were individuals created, but that God, loving all infinitely, should love each differently?  And this difference, so far from impairing, floods with meaning the love of all blessed creatures for one another, the communion of the saints.  If all experienced God in the same way and returned Him an identical worship, the song of the Church Triumphant would have no symphony.  It would be like an orchestra in which all the instruments played the same note…. But the eternal distinctness of each soul–the secret which makes of the union between each soul and God a species in itself–will never abrogate the law that forbids ownership in heaven.  As to its fellow-creatures, each soul, we suppose, will be eternally engaged in giving away to all the rest that which it receives….  For in self-giving, if anywhere, we touch a rhythm not only of all creation but of all being.  For the Eternal Word also gives Himself in sacrifice, and that not only on Calvary….  From before the foundation of the world He surrenders begotten Deity back to begetting Deity in obedience.[2]

This is just one reason why the Church celebrates the Feast of All Saints.  By ourselves, each one of us is like a blind man feeling his way in the dark.  But in heaven, all of us will help one another to see.