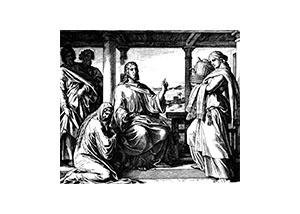 As they continued their journey he [i.e. Jesus] entered a village where a woman whose name was Martha welcomed him. She had a sister named Mary [who] sat beside the Lord at his feet listening to him speak. Martha, burdened with much serving, came to him and said, “Lord, do you not care that my sister has left me by myself to do the serving? Tell her to help me.” The Lord said to her in reply, “Martha, Martha, you are anxious and worried about many things. There is need of only one thing. Mary has chosen the better part and it will not be taken from her.”

One of my all-time favorite poems is the very lengthy Divine Comedy by Dante Alighieri.  Many of you have read at least portions of it in high school.  You know that this epic poem consists of three parts.  First, there’s the “Inferno,” where Dante takes a trip into the abyss of hell.  Hell is portrayed as a cone-shaped pit.  As Dante descends, the circumference of the infernal regions decreases and the torments increase.  Next, there comes the “Purgatorio.”  Here the author climbs the seven-story mountain of purgatory, each level corresponding to one of the seven deadly sins.  Finally, there’s the “Paradiso.”  Dante is escorted through the celestial realms of planetary orbits until he at last gains a brief glimpse of the Beatific Vision and experiences the joys of heaven.

Now, mes amis, I’d like to draw your attention to the two creatures who occupy the opposite ends of Dante’s cosmology.  In the uttermost depths of hell, at the very bottom of the conical pit, we find a three-headed Satan partly submerged in solid ice.  Lucifer’s wings are frantically beating in an attempt to escape the ice, but, as Professor Anthony Esolen points out, it is precisely the Devil’s ceaseless wing beats that create the frigid wind that, in turn, freezes the infernal water and solidifies it.  Ironically, the Evil One is literally imprisoned by its own frenzy to be free.[1]

At the very opposite end of the spectrum, on the loftiest pinnacle of paradise, Dante shows us none other than the Blessed Virgin Mary.  Our Lady is described as “she who did man’s substance glorify so that its own Maker did not eschew  even to be made of its mortality.”[2]  In other words, Mary was a maiden so still and tranquil in the presence of Almighty God that His own Spirit could overshadow her as easily as a match enkindles the candle that is still.

Thus at the extreme ends of Dante’s cosmos, we have two very dissimilar creatures: a frantic Satan held captive by its own efforts at self-liberation and a tranquil Virgin Mary finding ultimate repose in the will of God.  Could any lesson be more obvious?  Anxiety draws one down and imprisons.  Quiet repose in the divine will raises one up in true freedom.

We’ve all heard Saint Luke’s familiar story of the two sisters Mary and Martha—Martha busy with housework, Mary sitting at the feet of Christ.  For years, I’ve thought of Martha as symbolizing activity and Mary as symbolizing passivity.  I also tend to think of Martha as representing life in the world and her sister Mary as signifying the religious vocation of monks and nuns.  Imagine my surprise when I discovered that Saint Francis de Sales takes the familiar story and gives it a different twist.  Martha’s fault, he says, was not over-activity but anxiety:

Therefore, my daughter, be careful and diligent in all your affairs; God, Who commits them to you, wills you to give them your best attention; but strive not to be anxious and solicitous, that is to say, do not set about your work with restlessness and excitement, and do not give way to bustle and eagerness in what you do;—every form of excitement affects both judgment and reason, and hinders a right performance of the very thing which excites us.  Our Lord, rebuking Martha, said, “Thou art careful and troubled about many things.”  84    S. Luke x. 41. If she had been simply careful, she would not have been troubled, but giving way to disquiet and anxiety, she grew eager and troubled, and for that our Lord reproved her.[3]

Why is anxiety so wrong?  The good Bishop of Geneva explains:

This unresting anxiety is the greatest evil which can happen to the soul, sin only excepted.  Just as internal commotions and seditions ruin a commonwealth, and make it incapable of resisting its foreign enemies, so if our heart be disturbed and anxious, it loses power to retain such graces as it has, as well as strength to resist the temptations of the Evil One, who is all the more ready to fish (according to an old proverb) in troubled waters.  Anxiety arises from an unregulated desire to be delivered from any pressing evil, or to obtain some hoped-for good.  Nevertheless nothing tends so greatly to enhance the one or retard the other as over-eagerness and anxiety.  Birds that are captured in nets and snares become inextricably entangled therein, because they flutter and struggle so much.  Therefore, whensoever you urgently desire to be delivered from any evil, or to attain some good thing, strive above all else to keep a calm, restful spirit,—steady your judgment and will, and then go quietly and easily after your object, taking all fitting means to attain thereto.[4]

Saint Francis de Sales uses the image of a bird caught in a net.  The more it struggles, the more enmeshed it becomes.  Such was the plight of Martha.

How can we, who live in the busy world, shake off anxiety and find rest in God’s will?  What I have found to be most helpful is the rosary.  It doesn’t require any eyesight.  As a matter of fact, praying the rosary is like feeling one’s way along a guide wire in the darkness.  Here’s how the Jewish author Franz Werfel describes the rosary in his book The Song of Bernadette:

The lips, one may say, murmur but automatically the words of the angel to the Virgin.  Yet the soul traverses the pastures of holiness.  Though the thoughts often stray from the proper forms and lament the unreasonable price of eggs, and though one even drowses now and then over an Ave, it is no great misfortune.  The deep feeling of being at home and protected remains.

Padre Pio once described the rosary as a great weapon against evil.  Here Franz Werfel likens the rosary to a taste of home.  The rosary said unhurriedly is the very best way I know to still the frantic wing beats of the soul.  Only unfluttering, extended wings can calmly ride the warm updrafts of grace and be lifted up on high.

[1] “How to Put Your Soul on Ice: Freedom and Autonomy in the Divine Comedy,” a lecture delivered by Dr. Anthony Esolen on Tuesday, Feb. 25, 2008, to the Torrey Honors Institute at Biola University.