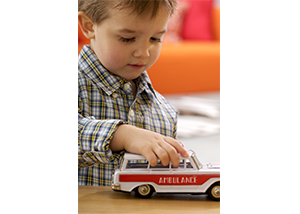 A Homily for the Second Sunday of Ordinary Time

In the 1996 movie The Preacher’s Wife, Denzel Washington plays the role of an angel named Dudley.  One scene is a particular favorite of mine.  A little boy, unaware that he is speaking to an angel, asks Dudley to fix a broken toy ambulance.  Dudley takes the little vehicle, turns it over in his hands, and gives it back to the boy.  The next moment, the ambulance is moving across the floor, lights flashing, siren blaring.  “Wow!” exclaims the boy.  “It never had a siren!”  “Oops!” is all Dudley can say.

What a wonderful story!  It has the ring of heaven about it, doesn’t it?  Here’s a thought:  What if the angel had merely taken the ambulance, given it a quick coat of fast-drying spray paint, and then handed it back to the boy with the words, “Well, that’s the best I can do”?  How utterly disappointing!

Okay, ladies and gentlemen, I’m not going to talk about broken toy ambulances.  I want to discuss the state of the Christian soul.  What will Jesus do for His faithful follower?  Some Christians believe that the best thing Jesus can do for the Christian soul is merely to hide its ever-present sins under the mantle of His mercy, to conceal its wickedness under the cover of His blood.  The Catholic Church, however, insists that Christ’s ultimate purpose is not to veil our sinfulness but to transform the Christian soul into an image of Himself.  The Church teaches that when Jesus is done fixing us, we’ll actually be better off than we ever would have been if our First Parents never had sinned.  We’ll be like the little boy’s ambulance in the movie The Preacher’s Wife.  In Jesus, we’ll be better off than before we got broken!  Our Lord’s blood is not like paint.  It’s more like a powerful transforming detergent.  John the Baptist tells us in our Gospel that Jesus has come, not to cover up our sin but to take away the sin of the world.[1]  It’s our job, then, to cooperate with Christ’s grace through prayer, good works, and the sacraments.  In the end, Jesus will transform each one of us into an image of His very Self.  That’s what Saint Paul means in our Second Reading when he says that we are “sanctified in Christ Jesus, called to be holy.”[2]

One more point:  If a toy ambulance could both feel and speak, it would probably receive a new coat of paint without any complaint whatsoever.  The application of paint might even feel good.  But if that ambulance were to somehow acquire a siren, the process might be somewhat painful, and the little vehicle might utter a few protests.  Real change, as opposed to superficial improvement, always hurts.  Holiness hurts.  C.S. Lewis makes precisely this point in his book Mere Christianity.  Here, however, he does not use the image of a toy ambulance.  Instead, he employs a more grownup metaphor.  He writes:

I find I must borrow… [a] parable from George MacDonald.  Imagine yourself as a living house.  God comes in to rebuild that house.  At first, perhaps, you can understand what He is doing.  He is getting the drains right and stopping the leaks in the roof and so on: you knew that those jobs needed doing and so you are not surprised.  But presently he starts knocking the house about in a way that hurts abominably and does not seem to make sense.  What on earth is He up to?  The explanation is that He is building quite a different house from the one you thought of—throwing out a new wing here, putting on an extra floor there, running up towers, making courtyards.  You thought you were going to be made into a decent little cottage: but He is building a palace.  He intends to come and live in it Himself.[3]

Yes, Jesus will make us better than we were before we ever got broken in the first place, but the transforming process hurts because Our Lord’s aim so far exceeds our expectations.  Lewis explains:

The command Be ye perfect is not idealistic gas.  Nor is it a command to do the impossible.  He [i.e. Christ] is going to make us into creatures that can obey that command.  He said (in the Bible) that we were “gods” and He is going to make good His words.  If we let Him—for we can prevent him, if we choose—He will make the feeblest and filthiest of us into a god or goddess, a dazzling, radiant, immortal creature, pulsating all through with such energy and joy and wisdom and love as we cannot now imagine, a bright stainless mirror which reflects back to God perfectly (though, of course, on a smaller scale) His own boundless power and delight and goodness.  The process will be long and in parts very painful; but that is what we are in for.  Nothing less.  He meant what He said.[4]

The transformation Christ wants to bring about in us will hurt, and if it is not completed in this life, there is always purgatory.  I like to think of purgatory as the mudroom of heaven, wherein the Blood of Jesus is applied one last time to our souls so that they can be perfectly cleansed for the wedding feast.

Can I trust Jesus?  Can I entrust my life to Christ despite apparent pains, setbacks, and disappointments?  Am I willing, as C.S. Lewis says, to go in for “the full treatment”?[5]  Can I allow Christ even now to begin transforming me from a shack into a palace?  Am I willing to do and suffer whatever it takes to acquire a celestial siren?