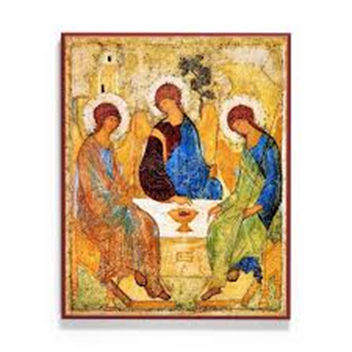 A Homily for Trinity Sunday

As part of my classroom lesson on the Trinity, I would give my high school sophomores the following instructions: “Using six lines of exactly the same length, construct four equilateral triangles of exactly the same size.”  Well, the kids would take out their paper, pencils, and rulers and go to work.  Regardless of how hard they tried, however, they would inevitably fail.  Only then would I give them the answer.  Taking six brand-new pencils from my desk, I would arrange three on the desktop so as to form a triangle.  Using this as the base of a pyramid, I would show the students how the remaining three pencils could be used to complete the pyramid, resulting in four equilateral triangles of exactly the same size.  The point is this:  What was thoroughly impossible on a two-dimensional plain became a piece of cake in three dimensions.  “Ladies and gentlemen,” I would announce, “when it comes to the truths of God, many are so mysterious as to be all but incomprehensible to human minds confined to the dimensions of earthly life.  In the dimension of eternity, however, matters will be much clearer.”  So it is with the enigma of divine foreknowledge and human freedom.  So it is with the problem of evil permitted by an all-loving God.  So it is with the mystery of the Trinity, the central doctrine of our Faith, to which the Church, in a special way, draws our attention today.[1]

As Catholics, we believe that, in the one divine nature of God, there are three divine persons: Father, Son, and Holy Spirit.  This is no easy mystery even to begin to grasp, and down through the centuries, theologians have come up with various analogies to explain it.  Let me give you five.

In the fifth century, Saint Augustine pointed out that the human mind has three powers.  “For example,” I would tell my students, “you have one mind, but you can use your memory to tell me the last time you ate pizza.  You can use your intellect to list some of the ingredients that go into your favorite pizza, and you can use your will to choose pizza over a plate of liver and onions.”[2]   Augustine argued that, just as one mind has three powers—memory, intellect, and will—so one God can have three Persons—Father, Son, and Holy Spirit.

Later in the same century, legend says, Saint Patrick employed a thoroughly Irish illustration to explain the doctrine of the Trinity.  When his pagan listeners failed to comprehend how one God could have three Persons, the patron saint of Ireland bent down and plucked a shamrock from the ground.  Holding up the three-leaf clover, he used the analogy to win his audience to the Christian Faith.

Other theologians in the East and West have used the fifteenth-century icon painted by the Russian Orthodox artist André Rublev to help them grapple with the mystery of a Triune God.  The icon depicts three angels at a table and was originally intended to portray Abraham’s angelic visitors as described in the book of Genesis.[3]  Countless Christians, however, have regarded the icon as an apt representation of the Trinity.

In the twentieth century, my favorite mystery writer Dorothy L. Sayers[4] came up with an ingenious analogy.  She argued that, just as one and the same book exists, first, in the mind of the author, second, in the form of printed pages, and third, as a memory in the minds of readers, so one God can exist in three Persons.

However, Frank J. Sheed, in his book, Theology for Beginners, has, I think, the most compelling explanation of the Trinity.  The Father, Sheed says, has an idea of Himself that is so perfect and infinite that this very idea is a Person, namely the Son.  Furthermore, the love between the Father and the Son is so infinite that love also is a Person, namely the Holy Spirit.  Sheed is quick to remind us that all three Persons did not come about in a step-by-step progression—first the Father, then the Son, then the Holy Spirit.  On the contrary, all three are fully divine from all eternity.

Alas!  All our attempts to explain the Trinity fall far short of the mark.  They tend to emphasize either the oneness of God to the exclusion of the three Persons,[5] or else they exaggerate the three Persons so as to make the concept of monotheism (one God) all but meaningless.[6]  This, however, should come as no surprise.  Remember what I said earlier.  Our limited human minds, bound to the dimensions of space and time, can in no way comprehend the mystery of a God who knows no limits.  To put it another way, if we really could understand the mystery of God, than what we understand would be no God at all.  How could a finite mind contain the Infinite?

American Protestant theologian Reinhold Neibuhr, in his book Beyond Tragedy, uses an illustration not unlike the one I used with my sophomores.  He says that the possibility of a human mind comprehending the mystery of a Triune God is as hopeless as the task of a maker of flat paper maps capturing all the contours of a round earth.  Incidentally, as many of you know, Reinhold Neibuhr is the author of the well-known “Serenity Prayer,” only the first part of which is generally recited by members of Alcoholics Anonymous.  With the mystery of the Blessed Trinity in mind, then, let me close with my own version of Neibuhr’s prayer:

God, grant me the serenity to accept the truths I cannot fully understand,

The open-mindedness to fathom the truths I can,

And the humility to know the difference.

[1] I think I borrowed this triangle analogy from C.S. Lewis, but I am not sure.

[2] In all my twenty-four years of high school teaching, I had only one student who preferred liver to pizza!

[5] Theologians refer to this error as modalism.

[6] This error is known as tritheism.