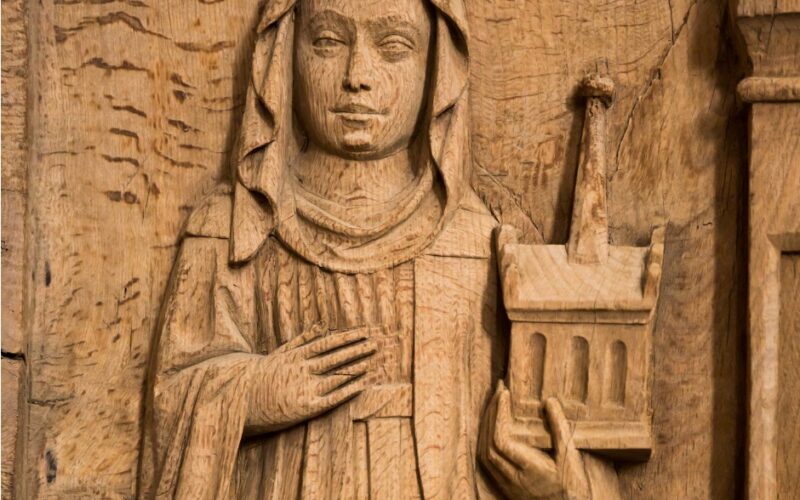 The Wisdom of Father Eric Bergman, J.R.R. Tolkien, and Saint Gertrude the Great

In fact, the hour is coming when everyone who kills you will think he is offering worship to God.

Father Eric Bergman, also a literal father of nine children, had been an Episcopalian priest.  He, his wife, his family, and a large part of his Episcopalian congregation became Roman Catholics.  He was eventually ordained a Catholic priest and now serves in the Diocese of Scranton, where he celebrates the so-called Anglican-Use Mass.

Years ago, when Father Bergman and I were having lunch together, he looked intently at me and said, “There is a real advantage to celibacy.”  I braced myself for a Henny Youngman joke about the difficulties of marriage, but I wasn’t prepared for what followed.  My friend continued.  “When the persecution comes—I do not say if but when—when the persecution comes,” and here Father Bergman pointed to me, “they will not be able to use your children for blackmail.”  Wow!  I had never before looked at celibacy in that way!  In any event, the threat of persecution came as no surprise to Father Bergman.  As he saw it, a church that is not persecuted, a church that is not contradicted by the world, is not the true church at all.[1]

Father Bergman is right.  Today, more than ever, our country is threatened by evil.  As American Catholics, our situation is particularly troubling.  I don’t think it’s any exaggeration to say that the hour may very well be coming when anyone who kills us “will think he is offering worship to God”—or at least to some greater cause.  What can we do?

In The Lord of the Rings trilogy by J.R.R. Tolkien, good King Aragorn must fight against the dark Lord Sauron, who threatens to envelop all of Middle Earth with his evil.  To do this, Aragorn must enlist the aid of the spirits of certain men who have died.  He therefore takes a perilous journey through the realms of the dead to summon these shades to battle.  As it turns out, the help of these spirits is decisive.

Our country and the Church in our country are in big trouble.  Like Aragorn, however, we Catholics have recourse to a help of which our enemies know nothing, a help that may prove decisive.  As Americans, we do well to remember and honor all those who died in war in defense of this country.  But as Catholics, we can do far better than simply remember these souls and honor their sacrifice.  We can pray to them and for them. We can appeal to the souls of our veterans who are in heaven, and we can pray for the souls of veterans who are still in purgatory, that, once they are in heaven, they can fight for our nation in a way they have never fought before.  If these deceased veterans were willing to lay down their lives for our country while on this side of life, how much more willing will they be to intercede for our nation on the other side of life!

Many [Doctors of the Church] affirm with great probability that we should believe that God
reveals our prayer to those holy souls so that they may pray for us. The souls in Purgatory, being beloved of God and confirmed in grace, have absolutely no obstacle to prevent their praying for us. If we desire the help of their prayers, it is only fair that we should remember to help them with our prayers and good works.

As some of you know, the mystic Saint Gertrude the Great, who died in 1301, was given a special prayer by Jesus Himself.  Our Lord promised that whenever this prayer is said, a thousand souls will be released from purgatory.  Here it is:

Eternal Father, I offer Thee the Most Precious Blood of Thy Divine Son, Jesus, in union with the Masses said throughout the world today, for all the Holy Souls in Purgatory, for sinners everywhere, for sinners in the universal Church, those in my own home and within my family. Amen.

I’ve made it a habit of saying this prayer twice at every Mass I offer—once at the elevation of the Host and once at the elevation of the Chalice.  Please join me in offering Saint Gertrude’s prayer often, especially for the souls of our veterans in purgatory.  Once in heaven, they will, as I said, fight for this great nation and the Church therein as they never fought before.

[1] In his 1938 book entitled Discourses on the Apostles’ Creed, Father Clement H. Crock regards persecution as “the Fifth Mark” of the true Church.  The other traditional Marks of the Church are, of course, unity, holiness, catholicity, and apostolicity.